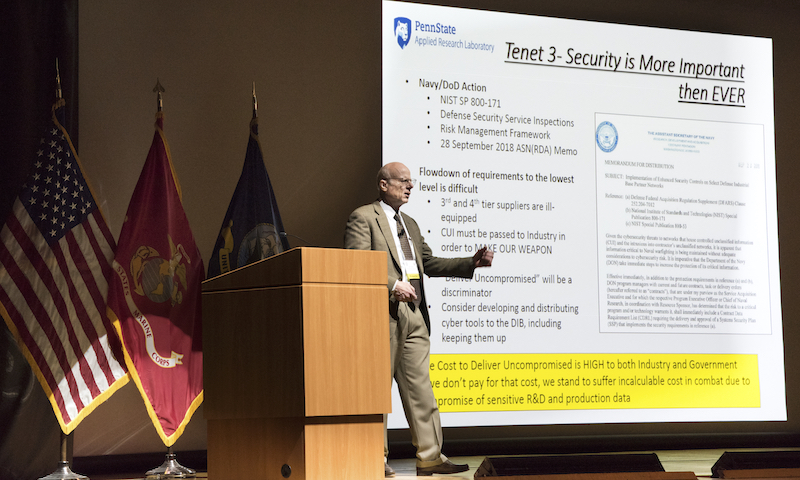 Retired Vice Adm. Paul Sullivan, current Director of the Applied Research Laboratory of The Pennsylvania State University, talked about the importance of maintaining supremacy in research and development (R&D), and how rival powers may threaten that supremacy, during the latest Secretary of the Navy Guest Lecture (SGL) in King Auditorium, April 9, serving as the keynote for the Naval Research Working Group.

“I’d like to challenge everybody in the room about the way you’re talking about R&D and innovation,” said Sullivan. “I think we’re in the innovation fight of our lives. … Your time at NPS is your entry ticket into what I call a pitched battle for control of the future.”

Sullivan, who served as the 41st commander of the Naval Sea Systems Command before retiring in 2008, delved into the efforts rival powers and partners are making to challenge U.S. innovation, mainly through financial power.

“We have state actors like China and Russia that are challenging us worldwide,” said Sullivan. “They’re challenging with aggressive actions politically, and out there at sea. We also have our frenemies that are happy to post on our coattails, and there are peer nations who look at us and say ‘Yes, we’re with you,’ yet they are stealing intellectual property to use for their own commercial benefit.

Sullivan noted that China is on a mission to control 20 percent of the world’s debt by 2020 and is making efforts to increase its commercial shipbuilding and control of mobile phone data. He added that Russia, who has the 11th largest economy in the world, is “punching above its weight” and spending a lot to research and develop ways to bypass U.S. systems.

While the U.S. cannot outspend both China and Russia, Sullivan said, the U.S. does need to reorganize how it innovates in order to better secure itself.

“There are a lot of ways to innovate and you should know which path you are working on because each may be different,” said Sullivan. “Some innovative paths included discovering a new capability through production, harvesting existing innovation for military purposes, innovating existing technology for a new use, and combining one or more existing technologies to create newer capabilities.”

Knowing which path to take will ensure success in the innovation, he added.

“Look at this audience, for there are four military services at a minimum here,” said Sullivan. “We have gender, racial and religious diversity. This is really powerful and it will help us out-innovate our enemies.”

Referencing his Penn State undersea autonomous vehicle team that consisted of different ethnicities, genders, majors of study, and professional backgrounds, Sullivan said that having a diverse team presents many points of view and different ways of thinking, which can result in new directions for innovation.

“Diversity is pretty important,” said Sullivan. “If you’re running an organization and you’re not headed this way, you’re going to be dead in about 15 years.”

Before concluding his presentation, Sullivan transitioned to the stark reality that R&D is at a significantly heightened cybersecurity risk, and securing that data and operation is paramount.

“Virtually all technological universities in the U.S.A. have probably been hacked,” said Sullivan. “The non-defense industrial base is wising up, but the persistent threat just keeps going.”

Sullivan noticed that the cracks in cybersecurity did not come directly from Navy project managers, but from third and fourth-tier contractors, suppliers and manufacturers.

“They’re tunneling up to get data from our biggest and most important firms, many of which are not equipped,” said Sullivan. “We’ve got to figure this all out and be uncompromising with our projects. It’s going to be a competitive advantage if you can show that you’re protecting your data.”

Given Sullivan’s presentation at the university coincided with the latest Naval Research Working Group, he concluded his remarks by reminding the NPS audience how they contribute to R&D innovation.

“You’re all here to fix problems that really exist out there,” said Sullivan. “Your projects and thesis topics are all directly related to your warfare brothers and sisters, and you have a research base that just doesn’t exist anywhere else.

“When you get out of here, I want to make sure that you understand that these are all things that your nation needs,” continued Sullivan. “You’re being taught how to think, innovate, and manage others to innovate and multiply your effectiveness.”