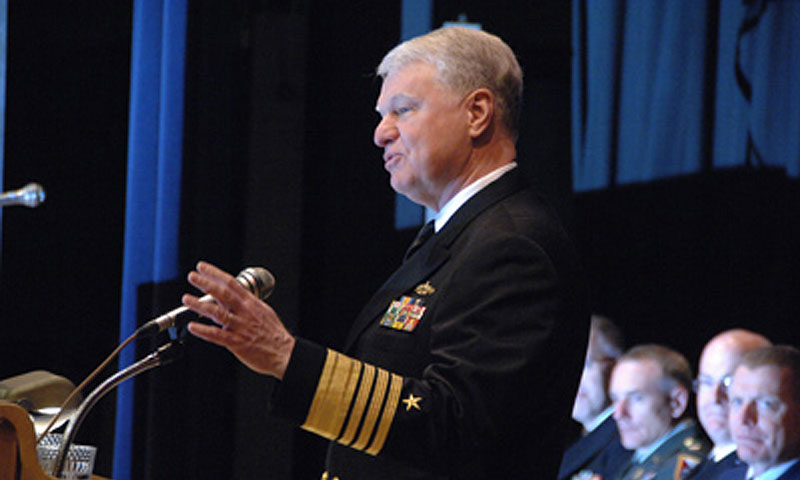 Chief of Naval Operations Admiral Gary Roughead rallied nearly 200 graduates from all the military services and nine allied and coalition nations at the Naval Postgraduate School’s Winter 2011 commencement ceremonies, Mar. 25, his second graduation keynote in three years. NPS President Dan Oliver thanked Roughead for his unwavering support “as the first CNO in decades to commit resources to the Naval Postgraduate School at a level befitting a flagship institution.”

NPS President Dan Oliver, who introduced the 29th CNO as “my boss,” thanked Roughead for his leadership “that has had an extraordinary impact on the Naval Service.”

“For those of us who believe in the mission of NPS, Admiral Roughead has been especially supportive,” Oliver said. “He is the first CNO in decades to commit resources to the Naval Postgraduate School at a level befitting a flagship institution. He re-energized our governance and oversight mechanisms, set standards for our support, and directed the dollars to meet those standards. The palpable facility improvements from which we are all benefitting are the result of this CNO’s commitment to graduate education for the officer corps. This is his second [NPS] graduation as CNO, which is also a first in decades, and I could not be more proud to have him with us again.”

The CNO who recently stood up the Navy’s Cyber Command was quick to return the compliment, and seemed equally proud to address the nearly 200 officer students along with their friends and family members in King Auditorium.

“The Naval Postgraduate School is a unique institution among our elite schools whose twin objectives of cutting-edge, actionable research and pertinent instruction by a renowned faculty stand as a challenge to other great institutions. President Oliver’s dedication to building its strength has just been aptly demonstrated by his having led the school as a whole to a highly-uncommon, ten-year accreditation,” Roughead said to sustained applause, and then turned to the graduates.

“Today is a very special day of great achievement for each one of you nearly 200 accomplished students and future leaders who will play a major role in institutions of great importance to your nations,” the CNO said. “You have benefitted from the rigorous and comprehensive education you have received here at the Naval Postgraduate School, where you have had time to reflect, to think analytically, to question assumptions, and benefit from exposure to one another’s ideas as much as from your challenging and relevant degree programs.

“All of you here today, with your various professional backgrounds and the knowledge and relationships you now have, make me confident that we will chart a safe course through some challenging times and successfully shape tomorrow for future generations,” Roughead continued. “Those who have earned an MBA geared towards public sector finance will be singularly equipped to tackle the juxtaposition of national security requirements and pressurized defense budgets. Those now steeped in defense acquisition and resource management will be asked to lead our charge to improve the speed at which we field cost-effective and integrated warfighting capabilities for those who go into harm’s way. We will look to those who have earned advanced degrees in engineering and applied sciences to develop tomorrow’s Navy at the confluence of cyber and directed energy technologies. And we will rely on regional security studies experts in our approach to strengthen bilateral and multilateral relationships for the broad challenges we face in common.

“I see great opportunity in your future careers to shape and lead, opportunity to bring to bear the benefits of an NPS education for the complexities of our time. Be confident that you are well equipped for what lies ahead of you as military leaders and defense and security experts, and don’t forget that few, if any, are better equipped than you,” Roughead added.

“Congratulations on your accomplishments today,” he concluded, “and thank you for everything you will do in the interests of our common security and prosperity in the years ahead.”

Following the ceremony, the newly-minted graduates and their family members gathered in the Barbara McNitt Ballroom in Herrmann Hall for the ceremonial cutting of the Winter 2011 class cake. Sharing the honors with the CNO, Oliver and Executive Vice President and Provost Leonard Ferrari was top student award winner Marine Corps Maj. Jacob Reynolds, who collectively sliced through the frosting layers with precision.

“I can’t express strongly enough how wonderful it’s been to be a student here at NPS. As an officer matures into the senior ranks, critical thinking skills become invaluable in both staff and command assignments, and the NPS faculty and curricula hone these priceless skills of thinking and writing critically,” Reynolds said. “You learn how the academic world integrates with military operations and strategy, and because of the joint and multinational nature of the student body, you get to know a broad demographic of U.S. military officers from across the services, foreign officers and civilians you would never otherwise meet.”

On Mar. 15, top faculty and students were recognized for outstanding achievement at the Winter Quarter Awards ceremony. Highlighting the honors was the presentation of the Bronze Star Medal to Air Force Special Agent 1st Lt. Kevin Burleson for meritorious achievement and exemplary leadership in intelligence operations while assigned to Air Force Special Investigations in Baghram, Afghanistan. Reynolds received the Navy League Award for Highest Academic Achievement and the Chief of Naval Personnel Award for Academic Excellence in Manpower Systems Analysis; and distance learning student. Susan LaShomb, Technical Manager for Maritime Surveillance Systems at the Naval Undersea Warfare Center, won the Outstanding Academic Achievement Award for a Department of Defense student.

“Though I undertook an NPS master’s program in Program Management to increase my knowledge of Department of Defense acquisition, I acquired far more value than just an increase in my knowledge base,” LaShomb said.  “In addition to broadening my understanding of logistics, software, manufacturing, finance and systems engineering and advancing my program management and team skills, my research project was extremely rewarding and important to the Department of the Navy. My NPS degree in combination with on-the-job assignments resulted in advancement at work to Naval Undersea Warfare Center Technical Program Manager for the Maritime Surveillance Systems Program and NAVSEA Acting Distributed Undersea Sensor Systems Technical Warrant Holder.”

“I’m overjoyed with the acknowledgement of my work,” said Brown, an expert in modeling explosive detonations who came to NPS in 2002 after retiring from four decades in the aerospace industry. “I’m very grateful for the opportunities provided here at the Naval Postgraduate School to follow a lifelong dream of teaching and, more recently, a desire to contribute to the education and critical decision-making of our fine armed forces members.”