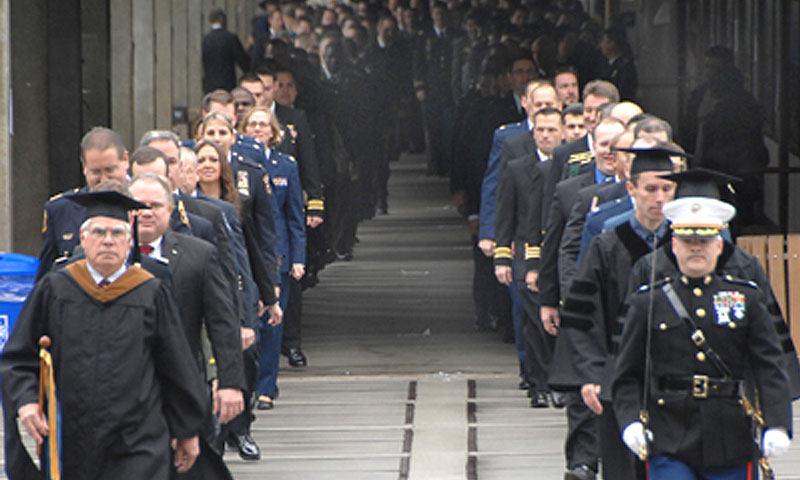 Students line up along the corridor of Root Hall in preparation for the Fall 2010 graduation ceremony. Two hundred eighty two graduates crossed the stage in King Hall to receive their degrees.

Officiating at her last commencement before retiring from more than 28 of naval service, Dean of Students Capt. Janice Wynn kicked off the ceremonies with the presentation of two prestigious Bronze Star awards, to Lts. Frank Morales and James McRandle.  Morales received the honor for meritorious achievement and extraordinary combat leadership as Strike Force Commander for a joint task force in support of Operation Iraqi Freedom.  McRandle earned his award for meritorious service as the Officer in Charge of Task Unit Special Weapons and Tactics’s Cross Functional Team, also in support of Operation Iraqi Freedom.

“Admiral Hunt is a consummate seaman, an educated and proven Naval leader, a man of integrity and a gentleman in the finest sense of the word, and we should all be proud that he is an NPS alumnus,” Oliver stressed, noting that the speaker would soon be joining the ranks of NPS Distinguished Alumni at the reception following the ceremony.

“In the 20 plus years that have passed since I was a student here, I truly believe I’ve used some aspect of my NPS education every day in every assignment I have had -- in my operational jobs at sea, in my Pentagon tours on both Navy Staff and Joint Staff, and on the ground,” Hunt said.  “In that same period, our world, our nation and our military have changed dramatically, and a common thread to addressing the new and complex challenges we now face is the necessity to understand how our adversaries think.  That information must come from study and interaction, which is what you’ve had the chance to do here at NPS.

“After having had the opportunity to meet and talk with about a dozen of you who are graduating in a wide range of disciplines, I now have an even greater appreciation for NPS and how it prepares you to meet those challenges.  I was impressed with the depth and richness of your studies, the dedication with which you approach them and how I work with every one of those areas every day in the Third Fleet.  We need our best and brightest to aggressively lead us through these issues, and that is exactly what your education here has developed.  It is you we are counting on to understand these complex challenges, to identify and analyze courses of action, and provide the wisdom and leadership to guide us through it.  It is their complexity that requires us to tap into the experience of every degree awarded here today.”

Hunt stressed the value of an NPS education for the graduates’ future career paths.

"From my Telecommunications class of about 17 students, three are currently still on active duty as Flag officers, and most of the others are captains or retired captains,” he recalled.  “So you’re on a good course.  Take advantage of it for your future careers.  The Naval Postgraduate School is a world-class institution, with a world-class faculty and the top officers from nations throughout the world.  You’ve just received the most advanced, up-to-date education and you have become as current as one can get in many demanding technical areas.  Use that knowledge and the doors that NPS opens for you.  Seize these opportunities, and act upon them, and I’m certain you will also use what you’ve learned here in your careers every day, sometimes in ways you’d least expect.”

“I view today as much more than a graduation,” Hunt concluded.  “It is not the end of your NPS experience, but a new beginning to the next phase in your career, and I ask you to embrace it the same way.  As you move on to your next assignments, I ask each of you to consciously think about applying the tools you learned here in Monterey.  As you go back to your services and departments, remember to view NPS as a Center of Excellence and tap into it when you see advantages in doing so.  I do that from Third Fleet and the results are impressive.  Be proud of what you have accomplished and boldly advance it to the next level.  You are our future leaders, and we’re counting on you to do just that.”
The morning’s top student honor -- the Navy League Award for the Highest Academic Achievement -- went to Lt. Alexander Baynes, an Engineering Duty Officer, for his thesis research on the efficacy of meta-materials and transformational optics to defend against high-energy electromagnetic beams.  Baynes, who earned Master’s degrees in both Physics and Applied Mathematics, was given the honor of using a ceremonial sword to cut the class cake alongside Adm. Hunt, President Oliver and Capt. Wynn at the gala reception in the Barbara McNitt Ballroom following graduation.

“The Naval Postgraduate School needs to be on every officer’s radar and should be a priority for most officers in the Fleet, because it provides an unparalleled and challenging graduate education tailored to the military professional,” Baynes said.  “There’s no other place in the world where a normal Tuesday can include attending classes taught by top professors in the field, heading off to finish an experiment in a multimillion dollar lab, networking at lunch with the best and the brightest officers of the U.S. military services, and ending the day with a lecture from a Senator, a Nobel Laureate or the Chief of Naval Operations.  This experience has afforded me a unique, world-class graduate education, which will be invaluable to my personal career and, more importantly, to my county.”

“If you have the chance, definitely take advantage of the opportunity to come to NPS,” Lawler said.  “It’s a once-in-a-lifetime opportunity.  Some of the top professors in the country and the world are here.  They’ll stretch your mind, and it’s a lot of work, but it will definitely benefit you when you go back to the Fleet.”

Retired Capt. Scott Jasper, a lecturer with the Center for Civil-Military Relations, received the Lieutenant Commander David L. Williams Outstanding Professor Award, presented to the School of International Graduate Studies faculty member who has demonstrated the greatest dedication to and had the greatest impact on the learning and intellectual growth of students.

“This award serves as a tribute to the many esteemed academics and practitioners involved in the International Defense Transformation resident courses, mobile seminars, conferences, and book publications,” Jasper said.  “It is a privilege to provide our array of educational programs and products to both the students at NPS and international participants abroad with the hope and trust that the materials might benefit our collective security posture.” Other faculty members recognized for outstanding teaching and research were Graduate School of Business and Public Policy (GSBPP) Assistant Prof. Keenan Yoho, who received the Louis D. Liskin Award for Teaching Excellence; Operations Research Assistant Prof. Dr. Johannes Royset, who earned the Carl E. and Jesse W. Menneken Annual Faculty Award for Excellence in Scientific Research; John Green and Dr. Donald Meuhlbach, Jr. who both received Wayne E. Meyer Awards for Teaching Excellence in Systems Engineering; Cmdr. (sel.) Owen Schoolsky, who earned the First Command Military Leadership Award; and Capt. Mark Huber, recipient of the Military Officers Association of America Joint Service Warfare Award. 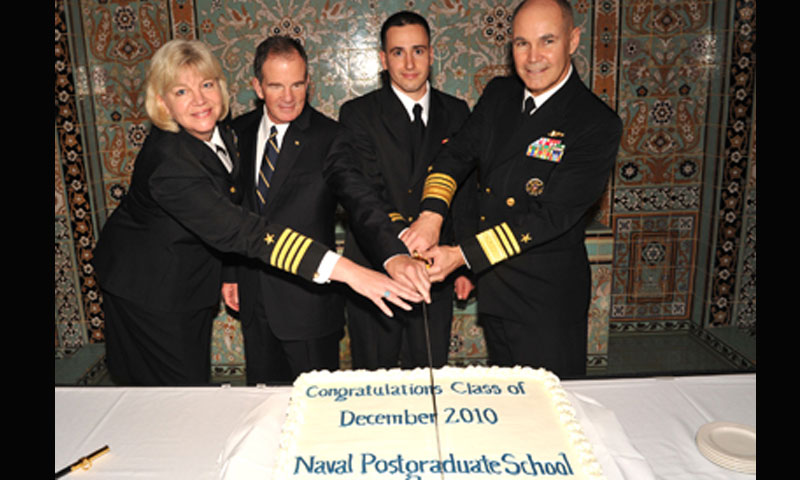 But the Naval officer for whom Adm. Hunt’s promise -- that the day’s ceremonies weren’t  an end but a new beginning -- had to have been the most memorable was Dean of Students and NPS alumnus Capt. Janice “Jan” Wynn, whose moving retirement ceremony followed the reception in the ballroom.  In addition to receiving certificates of appreciation from President Obama, former president Bush and the governors of both California and Texas, Wynn, like Hunt, was honored with the Naval Postgraduate School Distinguished Alumnus Award.

“Capt. Wynn is a true professional,” Oliver said at the ceremony.  “She took the hard jobs and pursued them with obvious skill and success…In the past two years, she has done a phenomenal job of transforming policies and procedures here at NPS, strengthening support systems for the student population…Thank you for all the positive changes you’ve made on campus, and the wonderful support you provided during the Centennial and all those accreditation visits.  We wish you the best of luck and hope you have a wonderful retirement in San Antonio.  And when the heat gets too much, we’d love to see you come back to cool off.”

“It’s bittersweet,” Wynn said after the ceremony.  “I’m going to miss everything about NPS, especially the exciting academic environment and the wonderful students, faculty and staff I’ve met and worked with here.  We loved it, peacocks and all; morning colors, beautiful grounds, a killer ballroom and ghosts to boot; a great job, a super boss and amazing students.  NPS is the opportunity of a lifetime, but I’m looking forward to the next stage of my life, and -- this would be the case even if I hadn’t gotten that wonderful invitation from Admiral Oliver – I will definitely be back.”

Of the 353 graduates, 85 came from the Navy, 12 Marine Corps, two Coast Guard, 74 Air Force and 42 Army and one Naval Reserve.  The class also included 65 Department of Defense civilians and 72 international students from allied and coalition countries.  Degrees awarded were 3 Ph.D.s, 192 Masters of Science, 112 Masters of Art, 51 Masters of Business Administration, one Mechanical Engineer, and six dual degrees.  Eighty two students also received their Joint Professional Military Education (JPME) Command and Staff Diplomas from the Naval War College.  Seventy-one degrees were awarded to students in absentia, who were unable to attend due to operational commitments.