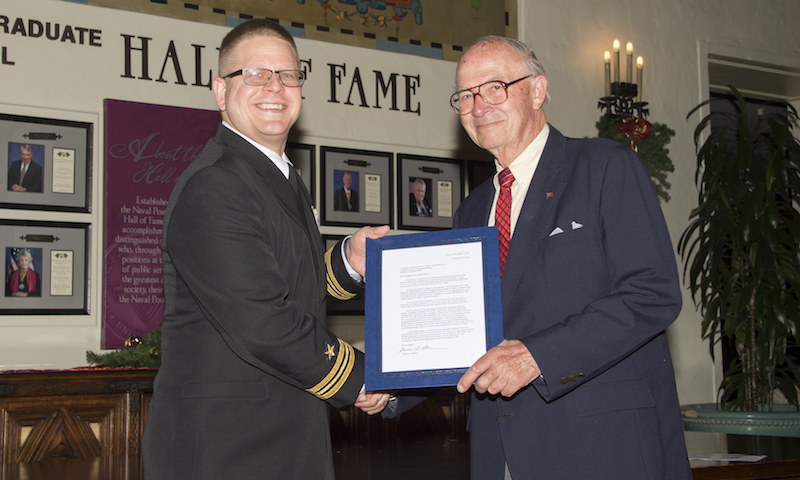 And if the recognition of the already prestigious AFCEA award wasn’t enough accolades for Bittner’s efforts, the soon-to-be graduate also received a congratulatory letter directly from former Chairman of the Joint Chiefs of Staff, retired Adm. Mike Mullen.

“It’s a pretty big deal. I’ve never had anything I’ve written read by a JCS, so I’m pretty excited,” said Bittner, who graduates December 15 with a Master of Science in Electrical Engineering.

In the personal letter to Bittner, Mullen also recognized NPS faculty for their contributions and leadership, many of which have spanned countless graduate students over the years.

“It is what NPS does best, ‘frame the problem,’ a process I learned in 1985 during my NPS graduate program in military operations research,” wrote Mullen.

“My research involved covert communications placed inside radar waveforms. I’m building the foundation for further research and eventual acquisition projects,” said Bittner. “My project didn’t focus on the AN/SPY-1 (U.S. naval 3D radar system), but I could see how what I did could be adapted for use in the SPY waveforms to increase connectivity throughout the fleet.”

Bittner and a few other grad students who are working on these specialized communications are in on the ground floor, as he put it. He also shares his achievements with contributors to the multi-year project, like previous Wozencraft Award recipient Ensign Allison Hunt, from the summer quarter of 2017.

“I have followed in her footsteps as we continue working on ways to build resiliency and covertness to our communications networks. And I have a few buddies in the next phase who are going to be taking the baton in this relay race,” added Bittner.

Bittner offers a bit of advice for future electrical engineering students as a take away on the learning and discovery process in thesis writing. “Find a good advisor. A good one is like bumpers in bowling – they keep you going in the right direction without getting a gutter ball,” he said.

Mullen closed his letter with a hearty congratulations, telling Bittner he is now part of a special class of innovators that will help lead our military.

“Congratulations again – you now join a special group of graduates who have benefitted from world-class scholars and innovators, all who have seemed to have gathered in the Monterey Bay region providing education … We are all products of this extraordinary legacy and the opportunities to succeed provided by NPS,” wrote Mullen.

Bittner’s next assignment takes him to Sasebo, Japan where he will be serving with Expeditionary Strike Group 7. Bittner hails from Duluth, Minn., and is accompanied by his wife and their three children.