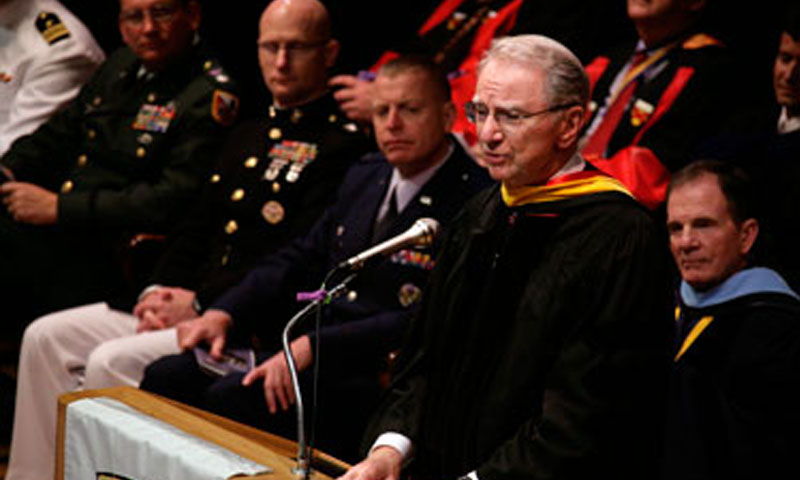 Dr. Irwin M. Jacobs, Chair of the National Academy of Engineering and co-founder of communications giant Qualcomm, addresses the near 250 graduates and accompanying friends and family during commencement ceremonies on Friday, June 18 in King Auditorium.

There was something special about Spring 2010 Graduation ceremonies at the Naval Postgraduate School, where 248 U.S. and international students earned a total of 253 advanced degrees, June 18.

The air was electric as a capacity audience of family members, colleagues and friends cheered the about-to-be graduates as they entered King Auditorium to a rousing march by the Del Monte Brass followed by an operatic rendition of the National Anthem by Mary Whitaker, daughter of NPS Operations Research Associate Professor Lyn Whitaker.

“On June 8th, we celebrated the second 100 years of the Naval Postgraduate School with two newly-renamed student awards presented by former Secretary of the Air Force, Director of the National Reconnaissance Office and first [DoD] Director for Telecommunications, Command and Control, and Communications Systems Thomas Reed,” Oliver said. “Those awards were re-named for the late Dr. Jack Wozencraft – former NPS Dean of Research and Distinguished Professor of Electrical and Computer Engineering; founding Chairman of the NPS Command, Control and Communications Academic Group; and recipient of the Institute of Electrical and Electronic Engineers Alexander Graham Bell Medal. Jack’s co-author on the acclaimed communications engineering textbook Principles of Communications Engineering, still in use worldwide, and the namesake of the University of California, San Diego Jacobs School of Engineering, Dr. Irwin Jacobs, is our guest speaker today.”

Before turning over the podium, Oliver noted, “The Chairman of our Department of Computer Science, Professor Peter Denning, was one of Professor Jacobs’ students at MIT, and NPS is benefiting from his and Mrs. Jacobs’ endowment of the Jacobs School of Engineering, as two of our newest professors – Assistant Professor of Systems Engineering and Electrical and Computer Engineering and our first C4I Chair Dr. Rachel Goshorn, and Information Sciences Research Assistant Professor Deborah Goshorn – both earned their Ph.D.s in electrical engineering from the Jacobs School.”

Jacobs reviewed the highlights of his career, which began with a high school teacher telling him there was no future in science and engineering; and included changing his major from hotel administration to engineering and moving to MIT for his doctorate, where the “Father of Information Theory” Claude Shannon was on the faculty, and was coincidentally one of Wozencraft’s doctoral advisors.

“I was invited to stay on as a faculty member, which is when I had an office next to Jack Wozencraft,” Jacobs recalled. “We became good friends and colleagues and wrote the book together, beginning with class notes and feedback from students to shape it. It was because of the book that I got a lot of requests for consulting, which led me to start a company called LINKABIT, where we worked for ten years with military programs and NASA to develop terminals in airplanes and ships and Army ground vehicles that could talk to satellites and carry sensitive messages. To stand out from the other companies that were pursuing the problem in a traditional way, we built our system around a [central] processor and [Very Small Aperture Earth, VSAT] terminals.

“The change came when the general in charge of space communications for Fleet SATCOM [Lt. Gen. Forest McCartney] decided to take a risk and fund it for production, and it’s still in use today,” Jacobs said. “Then, in 1985, I co-founded Qualcomm to move the CDMA [Code Division Multiple Access) mobile wireless technology developed for military uses into commercial applications, where it’s now used in all third-generation cellular communications by over 800 million consumers worldwide for voice and mobile broadband Internet access. With five billion cell phone subscribers projected by the end of this year, we’re just beginning to see the major impacts on our lives of these innovations in information technology and engineering.

“The point is, that was a very brave decision by the Fleet SATCOM general, to take a chance on a relatively unknown company with a new idea,” Jacobs noted, “and it leads to my two main messages today. As you take advantage of this wonderful education you’ve been given, become more receptive to new ideas. Be innovative. Be open to new possibilities and new approaches. If you are, the future is very exciting. And – as Jack Wozencraft was very positive and emphatic – understand the theory, but find its real-world applications. Take the theory and put it to use. Put it into practice.”

One of the two NPS faculty members who earned their doctoral degrees at the Jacobs School of Engineering mentioned by Oliver, Dr. Deborah Goshorn, had in fact just returned from receiving her Ph.D. at the school in San Diego.

“I just came back from graduating there on Saturday, so I feel honored and blessed to finally meet the namesake of the school who pioneered the technology that’s the foundation of everything my sister and I have worked on,” she said.

Following the ceremony, the graduates and family members gathered in the Barbara McNitt Ballroom for a reception and the ceremonial cutting of the class cake. Sharing the honors with President Oliver, Provost Ferrari and keynote speaker Jacobs was nuclear surface warfare officer Lt. Jamie Vandyke, winner of the Monterey Council Navy League Award for Highest Academic Achievement. 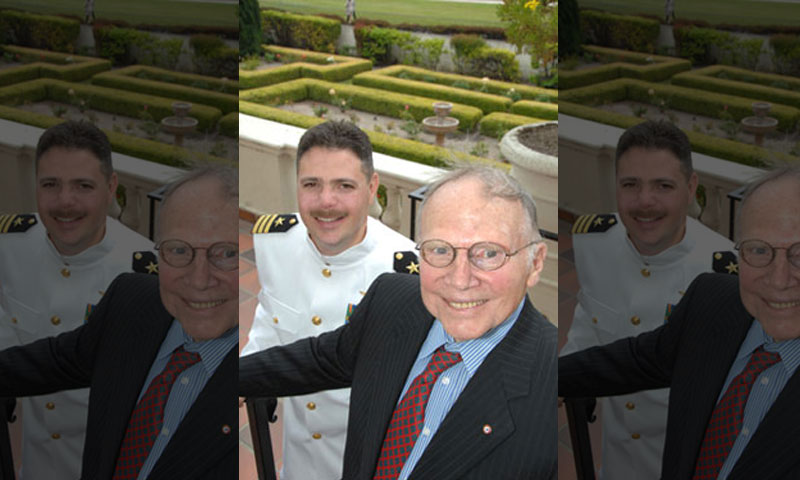 “I’m a mechanical engineer and nuclear surface warfare officer, but when I came to NPS, I took the opportunity to do something completely different and went into Space Systems Operations,” said Vandyke, whose thesis is on power beaming using ground-based lasers to charge solar cells on orbiting spacecraft. “The Naval Postgraduate School offers the unique opportunity to earn a first-rate graduate degree while applying what you’ve learned to real-world military issues, what both Dr. Wozencraft and Dr. Jacobs said are so important. NPS has earned my highest recommendation. The ability of the faculty to provide top-notch graduate education while simultaneously applying their talents to solve current military issues has equipped me with the analytical decision-making tools to be successful in the fleet.”

Aerospace engineering duty officer Cmdr. Clay Davis was happy to find one of his instructors, world renowned aeronautical engineer and Emeritus Professor Bob Wood, at the reception. “In my next duty assignment, I’ll be the commanding officer of the Defense Contract Management Agency at Lockheed Martin in Owego, New York, overseeing systems integration for all the military services and NASA, so my education here will impact acquisition contracts for all of DoD,” Davis said. “Owego fits all Navy helos with technical equipment, so if the new presidential helicopter program gets reauthorized, I’ll be able to apply what I learned from Professor Wood, who’s one of the field’s leading experts.”

On June 8, the Spring 2010 class gathered in King Auditorium for a Graduate and Faculty Awards ceremony to recognize outstanding students and faculty who had attained the highest levels of achievement in academics, instruction, research and community service.

"It’s truly been a deep honor to be able to pass through the hallowed halls with the legacy of so many who have devoted their lives to their country, studied here at the Naval Postgraduate School, and achieved greatness,” said Garbett, a regional affairs strategist in the National Security Affairs Department Europe track. “I definitely encourage others who might have the opportunity to attend this first-rate school to grab the opportunity without hesitation. It is a true crown jewel and a once-in-a-lifetime opportunity. The professionalism and expertise of the faculty is amazing, and the applicability of what we learn to real-world operations is absolutely critical to national security, international affairs and global military-diplomatic and civilian-military operations."

“NPS students are willing to take that extra step,” said Radko, who teaches fluid mechanics. “I’m truly impressed by their attitude and work ethic. There’s no doubt that my work with NPS students is the strongest and most positive experience I’ve had since coming to California.”

The top student award went to Vandyke, who “took the cake,” getting to cut it at the reception with a sword he complained, tongue in cheek, that he’d been given only a day to find.

“You get a sword when you’re an O-4, and I’m an O-3,” he said. “They only gave me 24 hours notice. I was finally able to get one from a friend who’s graduating next quarter.”

Of the 248 graduates, 88 came from the Navy, 26 Marine Corps, 41 Army, two U.S. Army Guard and 18 Air Force. The class also included 41 Department of Defense civilians and 32 international students from allied and coalition countries. Degrees awarded were nine Ph.D.s, 157 Masters of Science, 44 Masters of Arts, 39 Masters of Business Administration, two Mechanical Engineer, one Electrical Engineer, one Bachelor of Science and five dual degrees. Sixty-four students also completed their Joint Professional Military Education (JPME). Fifty-eight degrees were awarded to students in absentia, who were unable to attend due to operational commitments.