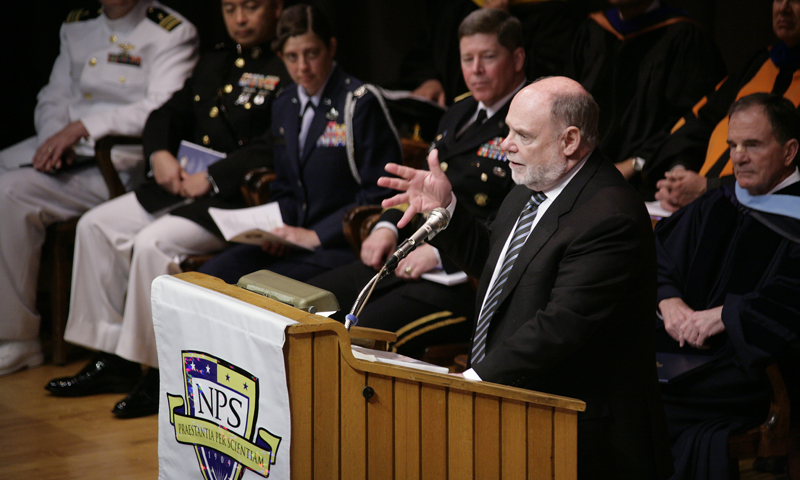 A day of perfect weather welcomed family and friends of this quarter’s graduates to the NPS campus for the Spring 2012 Graduation ceremony in King Auditorium, June 15.  NPS President Dan Oliver introduced the guest speaker, Mr. Gordon Eubanks, commenting, “He is a pioneer in the microcomputer industry … He and his wife are staunch supporters of NPS and delightful people to have in our community.”

Eubanks is an alumnus of NPS, graduating in 1976 with a Master of Science in Computer Science.  He founded C&E software, served as a senior executive at Digital Research, Inc., was president and CEO of Symantec Corporation for 15 years, president and CEO of Oblix and currently holds positions on the boards of several companies.  He noted during his comments that he wanted to link his experience in business with issues that he feels are valuable to the Navy.

He reflected back to his tenure as a student at NPS remembering that it was a great school with great professors, but that the university is different today than it was during his time, stating that NPS leadership has "raised the bar" tremendously.  “The school is every bit as good academically, as it had been in the past, as other universities, but provides a very unique value in tying in with the needs of the military and the Department of Defense.”  Eubanks went on to spotlight critical lessons in leadership that he has learned after a long, distinguished career in the information technology and security sector.  He emphasized four key elements to remember in serving in both business and military leadership: innovation, alignment, ability to change, and not forgetting your instincts.

He emphasized that the best organizations think about innovation and are in turn more successful, adding that it is important in any organization to work at alignment to include listening, understanding different perspectives and talking about issues.  “Change is inevitable in organizations, and you have to be able to change... you have to be patient during change,” he said.  He closed by commenting, “Experience manifests itself in your instincts, and you can’t not listen to your instincts and use them… You will be very successful in any career path using these four things.”

Following the graduation comments, Eubanks was presented with the NPS Distinguished Alumni Award by President Oliver for his contributions in building the foundations of today’s computer technologies, demonstrating the value of an NPS education, and for his continued support of the institution.

He commented, “It is an incredible honor and distinction.  It is truly amazing to be here.”  He stated that he would have never imagined back when he was a student sitting in the crowd that he would be up on stage delivering an address, adding in jest that some of the leadership from that time would be rolling over in their graves seeing him on the stage today.

Lt. Myron E. Lind was this quarter’s recipient of the Monterey Council Navy League Award for Highest Academic Achievement.  Along with that award, he also received the Louis D. Liskin Award for Excellence in Business and Public Policy, the Department of the Navy Award for Academic Excellence in Financial Management and the Conrad Scholar Award for Distinguished Academic Achievement in Financial Management.  He stated, “I am very humbled to have been acknowledged by these awards.  I considered my studies at NPS to be of the utmost importance and wanted to ensure that I gave them the best effort I could. The MBA I am receiving will allow me great flexibility and provide the Navy with a more, well-rounded officer than before.”  He hopes to be able to put his education to good use in the fleet. 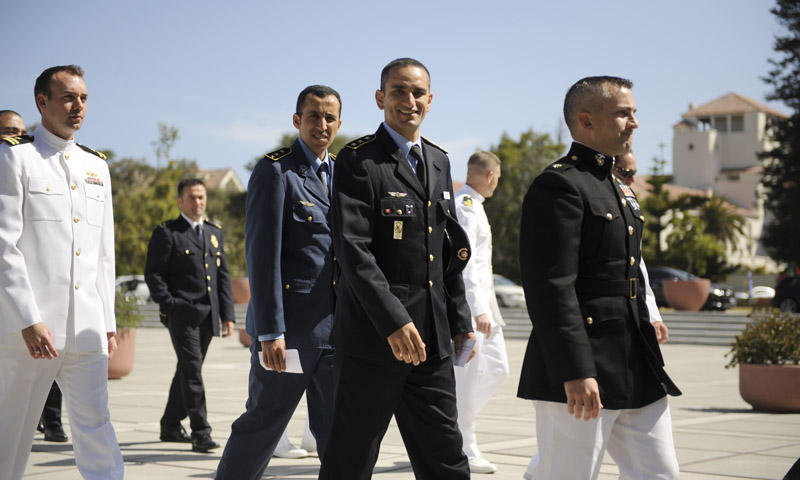 A small group of graduates await the procession into King Auditorium in advance of the spring quarter’s graduation ceremony, June 15. More than 320 students – representing all U.S. uniformed services, civilians, law enforcement agencies, and 19 nations – received advanced degrees during the ceremony.

“I was indeed pleasantly surprised to hear about the news at first but was too pre-occupied with my thesis work to find out what the award is all about. I only recently found out that it is a very competitive award that compares all the international students on both the academic level and their contributions to the society. To have won it, is indeed an honor,” he explained.

He remarked that he enjoyed his 18 months at NPS, expressing that he felt he had been blessed with dedicated and exceptional professors who taught him a great deal about oceanography, and receiving great support from his peers in the Undersea Warfare program and the Oceanography department that have made the entire learning process much more enjoyable.  “I have made a number of new friends and will always remember my time here in Monterey,” he said.

Senior Lecturer Alice Lyman Miller from the Department of National Security Affairs was awarded the Rear Adm. John Jay Schieffelin Award for Excellence in Teaching as well as the Lt. Cmdr. David L. Williams Outstanding Professor Award.  She said, “Winning both of these awards is an honor I deeply appreciate, but it is second to the greater honor of having the opportunity to work with people whose commitment to our country and dedication to their profession I admire.”

“They bring an inspiring idealism and sense of purpose – taking reading assignments as military orders – that have been tempered by a healthy dose of realism that students mostly lack at other institutions,” she expressed.  She remarked that the focus of her teaching at NPS has from the start been on helping the students who take her courses to see the bigger picture of international relations and politics in which their military skills are deployed, and that she wouldn't trade the chance to work with the students at NPS for a chance to teach anywhere else.