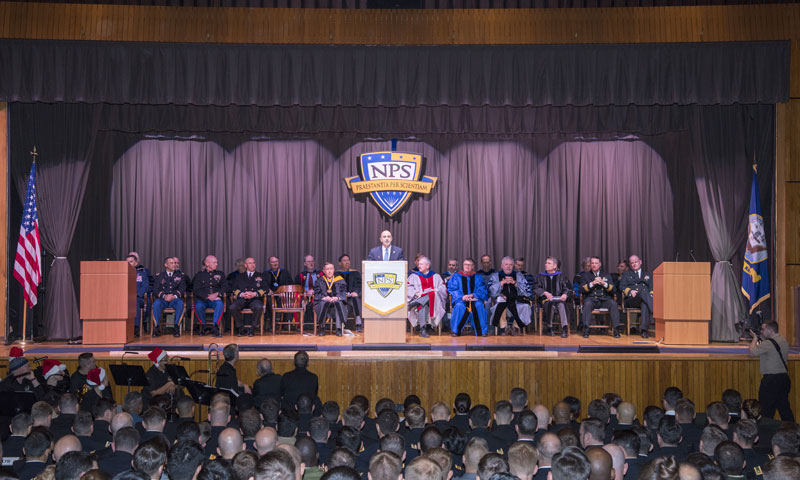 Congressman Jimmy Panetta offers his commencement address to the final graduating class of 2018 during the Fall Quarter Graduation Ceremony, Dec. 14, in King Auditorium. The graduation also marks the final class for university President retired Vice Adm. Ronald A. Route, who completes his five-year term at the helm of the institution in January 2019.

University president retired Vice Adm. Ronald A. Route opened the ceremony with a congratulations to the quarter’s graduating class, reminding the new NPS alumni of the higher calling that brings to NPS.

“While you reflect on your accomplishments and look ahead towards an uncertain future in a changing, and sometimes violent, world, we are reminded of our call to service; your call to service,” Route said. “It is our hope and expectation that you will leave here prepared to serve, and prepared to do something great.”

He then turned the podium over to commencement speaker, representing California’s 20th district, Congressman Jimmy Panetta, who began his speech with a special recognition of Route, who will soon complete his five-year term as NPS President.

“Admiral, you took the helm of NPS when there were rough seas, but due to your sense of service, your direction, your leadership, clearly you didn’t give up the ship. Instead, you secured this institution, its longevity and its continuing development and education of its students,” said Panetta. “I want to thank you for everything you have done not only for NPS, not only for this community, but of course, for our nation.”

Panetta then shifted his recognition to the staff and faculty of NPS, who he credited with “being dedicated to high education standards,” and more importantly, to the students.

“This faculty has made this place a world-class institution that truly benefits the future of our world-class leaders in our military,” he said. “I would also like to recognize the family members, the loved ones, the friends and the graduates who are not just here today, but for those of you who have continued to be there, again and again, so these students can be there for our country.”

A former member of the U.S. Naval Reserve, Panetta volunteered for active duty in 2007 and was deployed to Afghanistan in support of Operation Enduring Freedom. As a congressman, he is currently a member of the House Air Force Caucus, Army Caucus, the Coast Guard Caucus, Cyber Security Caucus and the Navy and Marine Corps Caucus. Additionally, he also serves on the House Agriculture Committee and the House Armed Services Committee.

“Let me now congratulate the Sailors, the Soldiers, the Airmen, the Marines and the civilian employees of our United States Armed services that are graduating today. Bravo zulu,” he said. “All of you worked very hard, in a wide array of topics to hone your intellectual firepower and be able to integrate your warfighting capabilities across all domains, be it air, land, sea, outer space and of course cyberspace.

“I hope that your time here gave you time not only to excel academically, but to get re-energized mentally, physically and spiritually,” he continued.

Panetta remarked on the beauty of the Monterey Peninsula and his family’s deep roots in the area. He told the story of his grandfather, an Italian immigrant who came to the United States and successfully opened a restaurant in Monterey.

“What my father was able to get out of my grandfather while was around was the reason as to why he made that sacrifice to come here, the reason he left the known for the unknown,” said Panetta. “He always said it was to give his children a better life. But what my father always made sure to tell us, is that, because we live the reality of that dream, we must also give back to the community that gave us so much.

“Now I know that all of you have that same desire to give back,” he continued. “That is why many of you came here to the Naval Postgraduate School, to improve, to innovate and to be that better leader and person who can serve our nation. That is why I believe so strongly in the mission of NPS to enhance the security of our nation by educating the men and woman who want to serve our nation.”

Panetta took the opportunity to highlight some of the outstanding work done by the graduating class. Lt. Jennifer Penley, he said, has conducted breakthrough research on powering gas turbines with hydrogen fuel instead of hydrocarbons, resulting in a greater energy output from the same amount of fuel and no toxic emissions. And Air Force Lt. Col. Clay Schuety and Maj. Lucas Will, who won the Army Futures Command Hack of the Drones 2018 competition by using artificial intelligence and wargaming for drone swarms.

In continuing his message of service and sacrifice, Panetta made a special note to Defense Analysis graduate, U.S. Army Maj. Peter Arendt, the recipient of the NPS Foundation Pat Tillman Leadership Award. Arendt was recognized for his unyielding support for fellow NPS student Army Maj. Sean Maples and his family, as he faithfully stayed by his comrade’s side during his long battle with cancer. Maples, who sadly succumbed to his illness October 14, was co-recipient of the award posthumously. Maples’ wife and three daughters accepted his degree on his behalf during a touching, and powerful moment during the ceremony.

In closing his remarks to the class, he encouraged the 360-plus graduates to seize their roles as leaders in a complex world.

“Through your work here at NPS, through your service to our nation and each other, we know that you have emerged at the top of your physical and mental game,” said Panetta. “You are the best and the brightest of our military, and we need you now more than ever at such a pivotal moment in our nation’s history, during such challenging and uncertain times.

“Each of you has put in the work and are prepared to confront any threat that lies ahead of us,” he continued. “As former President George H. W. Bush once said, ‘Think about every problem, every challenge, every issue we face, the solution for each starts with education.’”

“That is why we will continue to call on you, and expect great things of you as you step up and lead through your service, your innovation and of course through your fight,” he concluded. “I know, that you will continue to do so with the attitude that no issue, no problem and no challenge will ever be above your paygrade.”