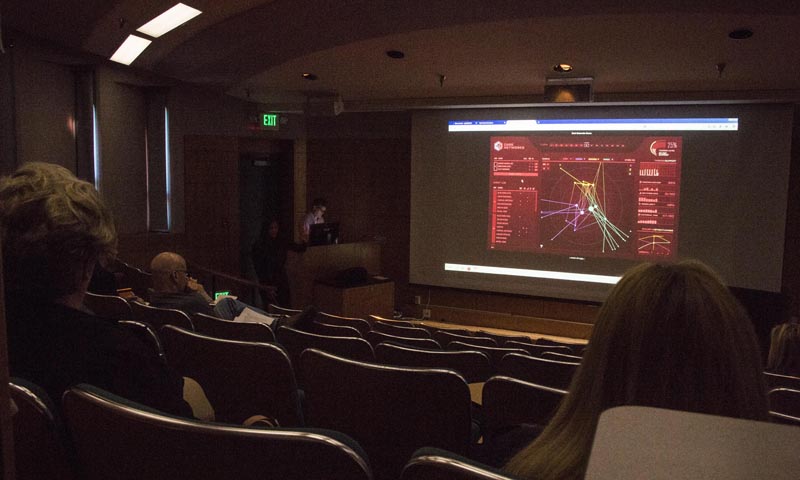 A diverse group of law enforcement officials recently converged on the Naval Postgraduate School (NPS) in order to learn about and collaborate on the burgeoning field of Social Network Analysis (SNA).

A diverse group of law enforcement officials recently converged on the Naval Postgraduate School (NPS) in order to learn about and collaborate on the burgeoning field of Social Network Analysis (SNA).

SNA is a methodology used by analysts to explore social relationships between individuals and groups, and represent them visually using graphs and metrics. The visual representations of networks produced through the SNA process offer analysts a means examine complex data sets and the relationships within them in a manner that is more readily discernible.

At NPS, SNA is championed by the faculty and students that man the Common Operational Research Environment (CORE) Lab. The lab has pioneered defense-focused SNA, especially within the Special Forces community. U.S. Army Special Forces Lt. Col. Glenn Johnson is the lab’s co-director.

“We used this in Iraq and Afghanistan, and against cartels in South America. Using those case studies, we assume that SNA is applicable everywhere,” said Johnson. “Right now we are exposing [law enforcement] to SNA’s capabilities … we have met with police departments throughout the country in places like New York, Kansas City and Las Vegas.”

The lab’s past work with law enforcement was featured in the New York Times after CORE Lab introduced SNA to the Massachusetts Police Department’s anti-gang unit.

“Our mission is to try to advance the SNA paradigm. Everyone has been doing link analysis for decades, but that doesn't really help us to understand or influence the human networks the way that we need to,” said Johnson, referring to the traditional manner in which relationships have been analyzed within the Department of Defense and U.S. intelligence communities

“In the past, link analysis helped us to take out bad guys, but for every one bad guy we took out of the picture, there was another one waiting in the wings to take his place,” explained Johnson. “[SNA on the other hand] is really about understanding people’s relationships. If I know who the trusted people in your network are, I can map out your members, business ties, religious affiliations and other connections. I can influence you.”

Associate Faculty for Instruction Daniel Cunningham is the project manager for the Advanced SNA for Law Enforcement project at the CORE Lab. He has spent the last five years at NPS under the direction of NPS Professor Nancy Roberts and, “Disrupting Dark Networks” author and CORE Lab Co-director Professor Sean Everton.

“One of our goals is to take theory and make it consumable to practitioners,” said Cunningham. “I want to see SNA institutionalized and used effectively and appropriately throughout both law enforcement and the DOD.”

According to Cunningham, few people within the DOD either understand or appreciate the utility that SNA can bring. Cunningham has been working to rectify that situation by increasing understanding of SNA as the CORE Lab’s outreach and education manager.

“We have already integrated SNA into the John F. Kennedy Special Warfare Center and School at Fort Bragg,” said Cunningham. “They are beginning their second iteration of the course.”

But Cunningham would also like to see further advances in the realm of law-enforcement-centric SNA. To this end, the CORE Lab is partnering with the Office of the Secretary of Defense’s (OSD) Domestic Preparedness Support Initiative, a support institution within OSD which offers a venue for SOF and DOD to offer analytical tools and methods to law enforcement agencies.

Cunningham has a likely ally in this effort in retired Assistant Police Chief Mike Aspland, a contractor with Digital Consulting Solutions that works with Cunningham at the CORE Lab.

“Right now we are trying to create the framework for applying SNA in a U.S. law enforcement environment,” said Aspland. “We are trying to expose these groups to what we are doing on the Special Forces side.

“If a police department can get to a gang network and can map out who the brokers of information are within that network, maybe they can influence the network without having to arrest anyone,” he continued.

Mark Chase is the 1st Assistant Prosecutor for Camden County, New Jersey. His department has been using SNA to identify criminals and their networks. As an attorney, Chase is familiar with the legal implications of SNA.

“We probably would not use [SNA] in court because we would have to establish its scientific acceptability and it would be hard to explain to a jury. It is a better tool for targeting where to look rather than for proving guilt or innocence,” said Chase. “Through using it as a tool to target, however, we are going to be able to get the information needed for a succesful prosecution.”

Despite SNA’s ability to reveal important, even intimate, details about human networks, Chase insists that it is on sound legal ground.

“SNA is a means of evaluating legally obtained information,” said Chase. “We are just taking link analysis to another level and augmenting it with algorithms that give us greater clarity.”

Information used to conduct SNA is gathered through voluntary interactions, court orders and from open source information easily gathered from the Internet and social media, areas where the courts have ruled that there is no reasonable expectation of privacy.

Benjamin Singleton, an intelligence analyst with the New York Police Department (NYPD) has found SNA valuable when dealing with cases consisting of multiple actors and large volumes of data.

“We used SNA on a fraud case that involved 80 phones and we had to subpoena some 300,000 phone calls,” said Singleton. “SNA helped us to answer the questions, ‘who are the main players?,’ and ‘who do we need to subpoena next?’ In a case of that magnitude, the old way of using colored markers and sticky notes was not going to work.”

“We are doing a lot of social media analysis of gangs, but the volume is way too much to handle. We are looking at thousands of accounts and seeking warrants for millions of Facebook messages,” he said.

“If a police department looks at phone calls, they can begin to map out who people are talking to. For example, a whole gang is arrested, and they all call one person from jail,” Singleton explained. “Understanding the human domain allows you to use all different kinds of strategies that leverage our understanding of the human terrain.”

“We call people that are part of a known network and tell them ‘we know what groups you belong to, if there is a homicide within your group, then we are going to be looking at you … your girlfriend’s voucher, your drug habit, we are going to put leverage on you,’” he said. Generoso believes this tactic forces gang members to pressure their peers to refrain from violent activity.

The Connecticut Police Department supplements these efforts by encouraging network members to reintegrate into society with the assistance of clergy, families of victims, past offenders and others who have walked in their shoes.

“We bring them in, provide them with some food and introduce them to senior level law enforcement,” said Generoso. “They have to come because they are all either on probation or parole.”

SNA for law enforcement is still in its infancy. But, if Cunningham, Johnson and the law enforcement professionals that they work with have their way, it will become an important tool for police departments throughout the country.