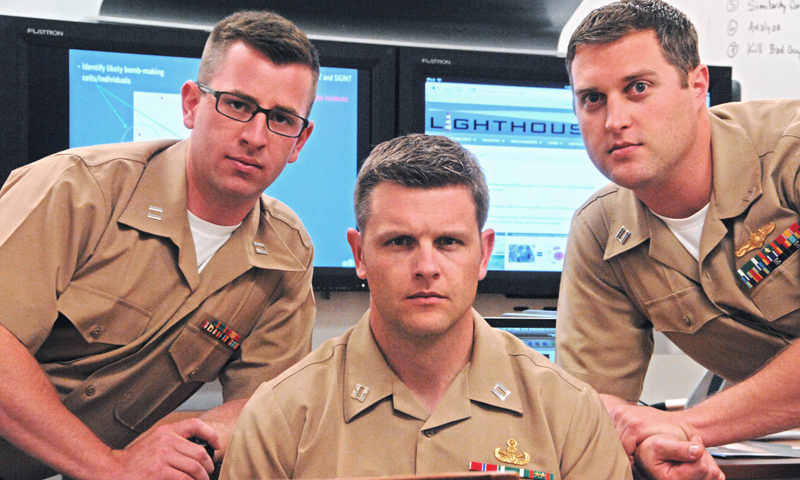 Marine Corps Capt. Carrick Longley, left, developed Lighthouse to utilize mobile devices in gathering socio-cultural data for situation awareness. The project has evolved greatly, and current efforts such as those by NPS defense analysis students Lt. John Taylor, center, and Lt. Deak Childress, right, have expanded Lighthouse to develop a resource for gathering and mapping data on improvised explosive devices and the networks that create them.

When improvised explosive devices (IEDs) talk, they have a lot to say. Each wire and detonator helps tell a story of who created the device. Their locations across a battlespace help create a visual map of IED networks. And now, two students in the Naval Postgraduate School’s defense analysis department are proving that efficiently recording and analyzing those IED details can save lives.

“We really tried to look at a way to capitalize on all of the component data that counter IED forces are required to collect. As it stands now, dozens of times a day throughout Afghanistan, counter IED forces, specifically EOD guys, are required to go out and collect enormous amounts of data,” explained Taylor. “What was the bomb made of? What were the specific components? How much explosive was used? Where was it located? They really try to paint a picture of exactly what happened.

“However, the data that’s collected isn’t being used efficiently or effectively in our opinion,” he continued. “So when we both came to NPS and heard about Lighthouse, we thought, ‘Why isn’t this being used on IEDs?’”

Childress and Taylor saw an opportunity for the concept of human-network mapping to be used in mapping IED networks based on the bombs’ ‘signatures’ or components that link the device to other IEDs collected. Presently, the raw data reports, collected in a post-blast analysis or IED neutralization, are done on paper, and later transferred into a digital report which is filed and largely unused at the tactical level. These reports are analyzed by multiple agencies, but according to the research done by Childress and Taylor, are not being fed back to the tactical operators in a timely or effective manner. Individual IED networks are commonly referred to as a single network, leaving little understanding at the tactical level about the individual threats.

With their combined intelligence and EOD perspectives, Childress and Taylor saw potential for the data to be analyzed to help tactical-level users better understand and potentially counter IEDs in hostile environments.

“According to the Joint Improvised Explosive Device Defeat Organization, the number of IEDs found and cleared continues to trend upward,” explained Childress. “So we are getting better at finding and exposing them before they blow up. And the severity of injuries from IED explosions is trending downward. But the overall number of attacks continues to exponentially go up.

“And that tells anyone looking at the problem that you’re not effectively attacking the network that’s putting those things in place,” he continued. “So that’s the line of operation that we focus on – ‘Attack the Network.’”

Using mobile devices to input data not only means reports can be generated instantly, but the data can also be unified to a common format with each entry. This streamlined system would mean analysts searching the database would be looking at seconds or minutes rather than the current system’s days or weeks.

“Right now, guys when they are reporting are taking notes and whether it’s a notepad or a Humvee window with a grease pencil, they get back and have to type out a big report, or multiple reports,” explained Childress. “They have to recall some things that they might have forgotten to get at the scene. What color was that wire? Was it red or was it green?

“If they did the same notes with this app, by the time they get back to their FOB [forward operating base], their report is already generated,” he continued. “So we are reducing the reporting burden on the EOD techs, while at the same time structuring the data that enables Intel guys to pull it into different analytical programs and do some powerful stuff with it.”

What IEDNA brings to the conversation is the possibility of bringing mobile devices to the front lines to help improve the ease and efficiency of data collection. When Lighthouse was thought up in 2009 by NPS information sciences student Marine Corps Capt. Carrick Longley – then a master’s student and now in his Ph.D. program – Longley envisioned a data-collection system that would allow for socio-cultural data to be collected on-site, and later analyzed to map the social networks of people of interest.

Initially part of his thesis research, then called the Field Information Support Tool (FIST), went on to be utilized in other capacities, but Longley and the CORE Lab wanted to continue to explore the program’s potential in more of an open source model of development.

“FIST and Lighthouse are similar in practice, but we have certainly advanced what we have been doing since transitioning to Lighthouse. If you look at the software today and the methods today, and you looked at it two years ago, they are not the same,” explained Longley. “One is a commercial product that is out there being tested, evaluated and used, and the other one is a research project that is being tested, evaluated and used, but with a different aim. The aims of the research project are the advancement of knowledge and understanding of [this phenomena].

“We didn’t feel like our project was finished simply because something had been transitioned into a commercial product. We wanted to continue to refine all of the practices and procedures for what we were doing, and really focus on the elements here in the CORE Lab,” he added. “And that’s why we have continued to really focus on open source and commercial-off-the-shelf technology and low-cost solutions to be able to do this data collection for the DOD.”

Lighthouse has proven itself in more than just foreign hostile environments. The Monterey County Joint Gang Task Force has recently adopted the application in tracking and mapping gang activity using mobile devices. Still in its initial phases of implementation, personnel on the task force use their Android- or iOS-based smartphones to input data gathered in their daily interactions with the community.

The app acts much like their traditional paper reports in the field, but enables officers to streamline identifying information – such as tattoos, gang affiliations, and the names of individuals connected to the suspect – and reference previously gathered information that might help identify inconsistencies or connections.

California Highway Patrol Captain William Perlstein explained that the process will improve the efficiency of the reporting system, and make important gang information instantly accessible for law enforcement officers in the field. He commended Longley on his innovation, noting that the benefits of the system will likely continue to grow in number as law enforcement officers work on building a visual map of the human terrain in the areas with high gang activity.

“I’ve been doing this 23 years,” Perlstein noted, “and for me, this is the first time that I’ve ever seen where emergency services and law enforcement have worked with academia on a research project that is just completely applicable to what we are doing in the field.”

One of Longley’s initial objectives was to bring these concepts into the hands of warfighters, and first responders. He credits his time in Iraq for inspiring his work, sparking an interest in better understanding complex environments, and giving the ground level personnel the off-the-shelf tools to effectively gather and analyze data.

The CORE Lab continues to work with Lighthouse, providing training and education to students and end-users of the system. While designed with the DOD operator in mind, the department responds to the needs of first responder and law enforcement communities in delivering Lighthouse in a way that meets their unique needs.

“It’s a way of taking advantage of the technology as it’s advancing,” said Longley, “to improve our ability to understand these environments by applying a lot of the academic rigor that exists here at NPS in a very specific application for DOD and law enforcement purposes.”