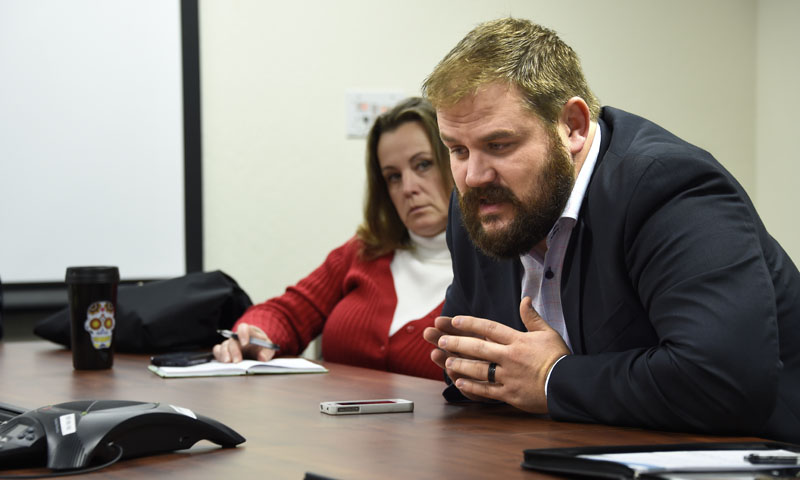 NPS Department of Defense Analysis Assistant Professor Bradley Strawser poses a question on the morality of drone proliferation during an academic conference call held in Bullard Hall, Dec. 4, organized by the Council on Foreign Relations. Titled “The Implications of Drones on U.S. Foreign Policy,” researchers from dozens of universities across the nation participated in the call.

Government officials around the country have been trying to understand and properly classify the use of drones outside of the battlefield. Recently, U.S. Senator Dianne Feinstein (D-CA) announced that she plans to introduce legislation designed to organize and expand a temporary ban on civilian drones.

The ban was previously put in place for privacy concerns and is now being potentially sustained over safety reasons, citing the Federal Aviation Administration’s (FAA) recent report that listed more than 190 safety incidents involving drones and commercial aircraft.

In 2014 a public opinion poll from Pew Research Center showed 63 percent of Americans are opposed to flying drones through U.S. airspace. Currently the FAA prohibits nearly all commercial drones accept for those used in relation to oil and movie production companies. Those that are permitted will have to adhere to strict regulations in the wake of the aforementioned report detailing incidents that involved consumer drones flying too close to airplanes without permission.

With drone proliferation seeming unavoidable, NPS faculty and researchers recently gathered in Bullard Hall to join the debate. The Council on Foreign Relations (CFR) invited NPS and other universities to join the discussion through their Academic Conference Call series.

Entitled “The Implications of Drones on U.S. Foreign Policy,” NPS faculty and researchers listened in as Cornell University Associate Professor of Government Sarah E. Kreps and Micah Zenko, a Douglas Dillon Fellow with the Center for Preventive Action, discussed the proliferation of unmanned aerial vehicles (UAV) and the consequences they have on U.S. and foreign relations.

“There are two big policy questions,” said Kreps. “One is the arms race of other countries in pursuit of this technology; that's the demand side. The other side is the supply side, and the U.S. has gone to interagency review about what its export policies should be.”

“Wealthy countries like France, Germany and Russia have been trying to acquire [advanced armed drone technology] indigenously and have been unable to do so,” said Kreps. “What we are trying to suggest is this isn’t a story of rampant armed drone proliferation.”

Kreps also spoke about U.S. policy and detailed the clumsiness of the Missile Technology Control Regime (MTCR) agreement and pointed out its failure to keep pace with the ever-growing drone marketplace.

“The MTCR’s thresholds are really arbitrary when it comes to drones,” she said. “There are category one systems that exceed a range of 300 kilometers and a payload of 55,000 kilograms, but already, industry is coming up with lighter technology that comes under those thresholds and make is possible to export those technologies.”

Zenko provided an overview of the use of UAVs and why U.S. public policy matters.

According to Zenko, as drone capabilities increase, so too will their proliferation. He also noted their ability to collect information while loitering undetected over targets for long periods of time without putting pilots at risk.

“[Drones] give us the ability to kill people that previously did not exist and it changes how civilians conceive the use of force,” he said.

“States are more likely to use force against drones than they will against manned platforms … this means there is greater possibility for misperception, miscalculation and the escalation of force between other countries,” he continued.

And third, drones aren’t regarded in the same esteem as human assets, making them attackable without repercussion. “States that routinely use drones will make the outbreak of conflict much more likely,” Kreps said.

During the call, NPS Department of Defense Analysis Assistant Professor Bradley Strawser was given the opportunity to share his own views on the morality of drone usage.

“I appreciate the fact that drones are a disruptive technology in foreign relations, [but] I’m not convinced that we have a strong moral argument to limit their proliferation,” said Strawser. “The reason for that is because they appear to be a moral improvement over other forms of weapons because they limit the risk to human pilots … are more precise, and they limit collateral damage when compared to other uses of force.”

“But perhaps those are both good things, perhaps they are strangely a moral improvement. If there are cases where we think a use of force is justified, then its only right we use the best most precise weapon we have, and can limit the risk to us,” he said.