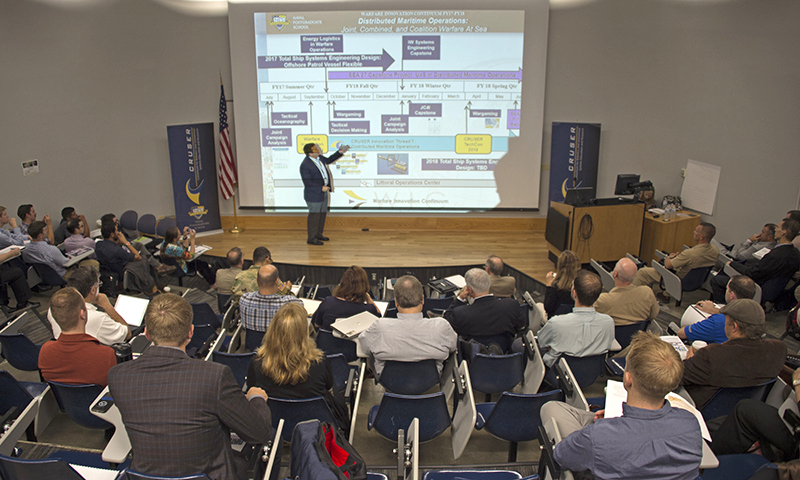 NPS’ Consortium for Robotics and Unmanned Systems Education and Research, CRUSER, hosted its annual Warfare Innovation Workshop in Glasgow Hall, Sept. 18-21. The workshop provides an opportunity for NPS student teams to develop warfighting concepts based on a detailed scenario, with the top ideas laying the foundation for detailed student research over the coming quarters.

The Naval Postgraduate School (NPS) Consortium for Robotics and Unmanned Systems Education and Research, CRUSER, hosted its annual Warfare Innovation Workshop (WIW) in Glasgow Hall, Sept. 18-21. The workshop brought together university students as well as members of industry, Navy laboratories, system commands and academia to explore innovative concepts in future warfare scenarios, with the top ideas becoming the foundation for future student research and exploration over the course of the next year.

This year’s scenario, titled “Hybrid War in an Urban Littoral Environment - Russia’s New Generation Warfare,” depicts a fictitious maritime war in the year 2030 in the Baltic Sea and its urban littoral environments. The scene unfolds with a perceived attempt of Russian forces to occupy the Baltic islands, with forces from Sweden, Finland and the U.S. arriving to defend the region.

After a period of six months, the allied forces leave the region believing the Russian assault had been deterred. But a new adversarial strategy occurs to destabilize the area, including Internet trolls, cyber attacks against personal and business accounts, periodic power outages, and lastly the Russian fishing fleet sailing through the area escorted by Russian patrol maritime ships, creating a significant military presence.

Tensions escalate when an undersea power cable between Sweden and Finland is dragged and cut at night by an unknown fishing trolley. Suddenly, a Russian cargo ship reports an engineering casualty and requests to come into port, a tactic believed to land troops on the island. In a nearby coastal city, civil unrest is fueled to contest the government, which empowers rebels to seize control of the city and all access to the port by sea.

With the scenario set, a lineup of senior leaders set the background for the student teams’ exploration. Deputy Assistant Secretary of the Navy (DASN) for Unmanned Systems, retired U.S. Marine Corps Brig. Gen. Frank Kelley was a constant participant in the workshop, including a panel discussion with NPS faculty, as well as offering feedback and advice as each student team developed their counter scenario.

“What is the Navy’s plan for unmanned systems? How will we apply emerging technologies to the way we fight? How might emerging technologies and joint combined coalition forces contribute to distributed maritime operations?” Kelley asked. “We do a lot of that in the Pentagon, and in our shop we really focus on the unmanned systems aspects. And we don’t get to spend a lot of time in discussions. We are very linear and we keep things moving.

“You guys don’t realize what a luxury a conference like this truly is,” he added. “I’m proud NPS has allowed us to participate in any form we can.”

Kelley continued his address to the group, discussing the Department of the Navy’s Strategic Roadmap for Unmanned Systems.

“There were 234 action items, that grew to 280,” he said. “There are a couple of [significant] things generated in that document, including 10 fundamental design principles and 10 unmanned enabled warfare areas.”

Kelley described some of the warfare areas and principles in greater detail, and later engaged with a panel of NPS professors and visiting contributors, each with expertise in different areas within the unmanned systems arena.

“My hypothesis with some of the problems that have been discussed is, I’m not sure if they are the way they are because of the lack of technology, or because of the lack of support,” said retired Capt. Karl Hasslinger of General Dynamics Electric Boat. “I think we need to develop high-level champions who can serve as advocates for unmanned systems. I think we then need to expose them to real world missions, willing to take the risk, even in sensitive places where we send manned platforms today.”

All of the discussions, presentations and the like set the scene for the student teams, who gathered throughout the workshop to discuss different solutions to the variety of issues presented in the scenario, with CRUSER Director Dr. Ray Buettner and Kelley providing advice and input along the way. The workshop culminates with each team offering a detailed brief on their ideas to the entire forum of WIW participants.

“We start with brainstorming and narrowed it down to four primary concepts that we thought had the most potential value added for the Department of Defense,” said Lt. Brandon Nichols from Team Gemini. “We had lots of concepts here, then we moved around point values to each to decide where the greatest value could be added. Through two rounds of voting, we narrowed down from 25 ideas to these four.”

Team Gemini continued to describe the specifics of an autonomous auto-swarm to perform operations like search and rescue, recovery of air assets, or to extend the view of the ship. This type of technology can typically be very expensive, which comes with a higher risk in investment versus return. Team Gemini explained the development of a low-cost, high-volume swarm that could achieve similar capabilities without the risk of investment lost.

“They would maintain a presence around the ship, which would not require watch stander intervention and would merely alert for an anomaly,” continued Nichols. “[We can] augment the situational awareness of the ship, while having minimal additional crew maintenance.”

While the concept generation ideas are futuristic, NPS Professor of Practice retired Navy Capt. Jeff Kline reiterates how the WIW sets the stage for future work in the classroom, the ultimate goal of the innovation workshop.

“Each year, the school takes a broad topic of interest to the Navy, last year was the CNO’s direction on how to strengthen naval forces at sea. This year, we are taking a specific look at strategic maritime operations. These are concepts that the U.S. Fleet Forces Command and Navy Warfare Development Command are looking at right now,” said Kline.

“The thread that Dr. Buettner and I talk about is the longer thread. The one that takes the concepts you are going to generate here this week, and drives them forward two years later to physical experimentation to see if they work, how they work, and what they work with,” Kline continued. “We will also have capstone courses that use a similar scenario to those you are using. We have given all of this to our fellow professors, so they can use it in the classroom, and they can tie whatever they are teaching specifically to an applied concept.”