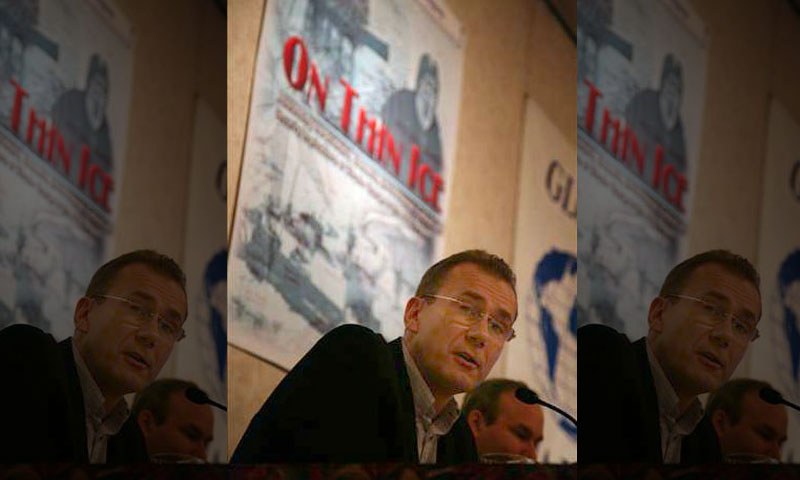 To unite stakeholders who hold varied interests in the Arctic region, the Naval Postgraduate School (NPS) Center for Stabilization and Reconstruction Studies (CSRS) recently co-hosted a two-day conference that addressed the economic, cultural, scientific, security and political implications of the region's dramatic change in climate.

"When those of us in the conflict management field look at this region, we see it is rife for political, human confrontation," said Matthew Vaccaro, the CSRS Program Director. "We don't expect violent conflict, but it certainly seems to us there is a high risk for much disagreement and political confrontation between stakeholders."

CSRS, a conflict prevention and conflict recovery program that provides educational opportunities for practitioners of peace and stability operations, drew guidance for the event from the U.S. military's new maritime strategy. The strategy emphasizes the need to prevent future wars through relationship building and cooperative approaches.

Dr. Tatsushi Arai, Assistant Professor of Conflict Transformation for the School for International Training, opened the conference by urging participants to establish a responsibilities-based approach to solving potential conflicts. "None of us in this room can solve our own sector’s problems without reaching out to other sectors...that is the challenge," he said. "When things are interconnected, it gives us an opportunity to activate peace and deactivate destructive potential."

Throughout the event, researchers and representatives from each stakeholder group shared their knowledge of the Arctic’s current environment and led focused discussions on the region's future.

Dr. Wieslaw Maslowski, a research professor for the NPS Oceanography Department, outlined the Arctic's current and future physical state, offering research that shows the ice is melting at a much faster rate than most models indicate. Maslowski called many of the current prediction models "too conservative of the current realities," and warned that if the warming trend continues, the Arctic may experience an ice-free summer as soon as 2013. The implications of an ice-free Arctic include the establishment of new shipping routes, international interests in natural resource development, and defense issues posed by limited capabilities for search and rescue missions.

Carroll Muffett, Deputy Campaigns Director for Greenpeace U.S.A., spoke about concerns for the Arctic's wildlife. He described the A?ctic as one of the few relatively pristine ecosystems left on the planet, with only four to five percent of the region having been explored. Muffett also spoke specifically of global warming's effect on polar bears, a species completely dependent on the Arctic ice. If projected sea ice conditions are realized, he said, approximately two-thirds of the world's polar bear population will be lost by mid-century.

Chief Joe Linklater, Chair of the Gwich'in Council, discussed cultural perspectives of the Gwich'in community, an indigenous nation in the Arctic region. Because global warming has affected the region's natural resources, traditional Gwich'in knowledge is becoming less reliable and transforming the mindsets of younger generations, Linklater said. He emphasized the need to include the indigenous perspective in decision-making processes, and said that all groups, whether they're environmental, political or a part of industry, need to consider how their decisions will affect the lives of the indigenous communities.

NPS President Dan Oliver also addressed the participants and said it was fitting for an institution like NPS to express interest in an event aimed at preventing conflict. U.S. national security policy clearly recognizes the effects of globalization, and NPS is an international institution that understands the importance of preventing wars in addition to winning them, Oliver said. "Something like this, where we're really at a new frontier trying to predict the future at the same time that we're trying to address the issues … is a very important task," he added.

Maj. Patrick Whelan, the Air Force Representative at NPS, said he was surprised to learn how quickly the Arctic region is changing. "I had been holding out some rather dim hope that climate change wasn't going to be this fast, but now it's staring me in the face and I have to confront it," he explained. As a result of the conference, Whelan said he plans to personally connect with some of the groups represented in the panel discussions.

The conference was notable for its involvement of so many different representatives of the NPS community. In addition to numerous graduate students and faculty participants from across campus, nine NPS faculty and staff from both the hard sciences and social sciences served as speakers, and many NPS staff members supported the large event.

For Vaccaro, the conference reaffirmed the need to unite various communities, in spite of their competing interests, to work collectively toward a solution. "The changes that are happening in the Arctic region and the potential for confrontation is so complex that you really have to involve a large group of stakeholders to come up with innovative solutions," he said.

"We know that we've built new relations and new understandings, but what the participants do with that, is up to them," Vaccaro continued. "We think and we hope that in six to 12 months time, we'll have a number of examples of how participants made good use of the new knowledge and relationships that they started here in Monterey, and that they continue meeting, dialoguing and brainstorming to work on the issues in the Arctic region."