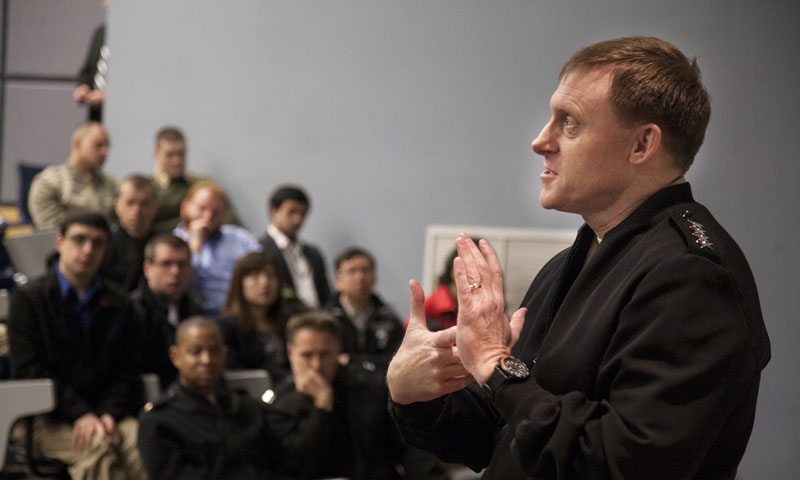 Adm. Michael Rogers, Commander of the U.S. Cyber Command (USCYBERCOM) and Director, National Security Agency/Chief, Central Security Service, took advantage of a recent trip to California to stop by the Naval Postgraduate School (NPS) in Monterey, Feb. 4. Rogers’ goal … to engage the intellectual capital within university students and faculty focused on the cyber disciplines in an effort to spur interest and draw upon expertise in what has increasingly become a primary front in the war of not just ideas, but of network terrain and critical infrastructure.

Rogers was quick to acknowledge the critical role that NPS plays in preparing personnel to meet modern cyber challenges, and broadly discussed the importance of advanced education to the Navy.

Following his discussion with cyber students, and a research roundtable with select faculty, Rogers sat down with NPS Professor of Defense Analysis Dr. John Arquilla to discuss the sort of ‘intellectual capital’ that Rogers needs to build a cyber force.

“Our greatest edge is the men and women who actually execute the mission. We need a broad set of human capital with a spectrum of capabilities,” explained Rogers, who noted the need for not just computer science experts but for technically-capable intelligence officers, planners, operations analysts and researchers.

But, Rogers insists that he is not just planning for a future or even potential threat … The men and women at USCYBERCOM are defeating enemy threats on a daily basis.

"Every day we are defeating elements that want to get into our networks in order to conduct reconnaissance, to understand our network structure or to understand where our critical structures are located. It happens every day. The challenge I increasingly find is that a passive defensive response is a losing strategy,” said Rogers.

“Cyber is a domain in which we conduct a wide-range of military operations,” explained Rogers. “There are more similarities [to traditional military operations] than differences. We have key terrain, objectives and conduct operations like anyone else.”

Another thing that USCYBERCOM has in common with the DOD as a whole is the modern era of austere budgets, where military commanders are asked to do more with shrinking personnel and resources.

“The mismatch between resources and requirements is nothing new … almost everything we took for granted during the Second World War in the Pacific, we actually did the foundational work for back in the 30s,” explained Rogers. “Cyber is much the same way. We are in an environment right now where threats and risks are accelerating rapidly … [but] even as the threats are rising, resources are declining.”

Still, Rogers is hopeful that through planning, forward thinking, innovation and education, both fiscal and personnel challenges can be mitigated.

“The power of intellect, the power of thought, becomes an incredible hedge and a real force equalizer for us,” said Rogers. “I try to remind people that as technically focused as cyber is, that it is the intellect and the heart of the people that is going to get us there, not just the technology.”

In closing his discussion with the approximately 200 students in attendance, Rogers offered a few final words emphasizing the importance of people in winning the fight, be it in the field, at sea, or on networks that span the globe.

“There is much more to service than the idea of wearing a uniform … I am mindful that we are all part of a bigger team, and it takes all of us working together to make this work. Cyber is a team sport,” Rogers said. And to the students in attendance, he stressed, “I need the power of your intellect and I need the capabilities of your leadership.”