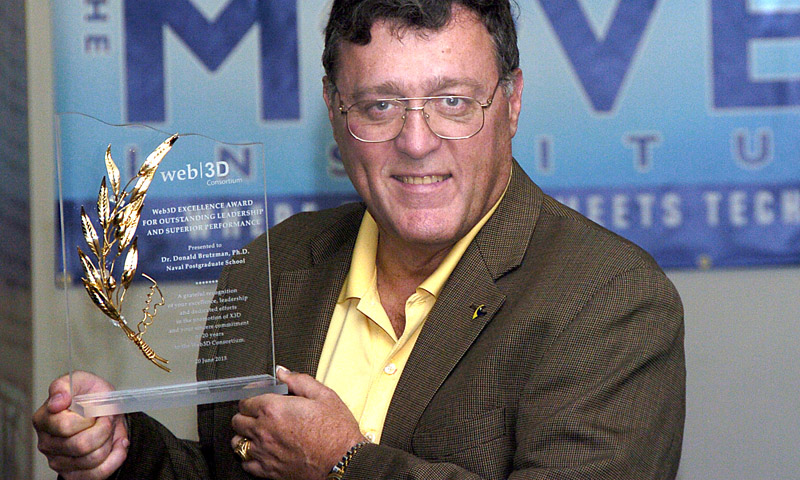 Dr. Don Brutzman has spent years promoting the adoption of Efficient XML data standards, supporting several NPS student theses along the way. With an upcoming program, titled “Compile-to-Combat in 24 Hours,” their efforts may lead to a significant change in how Navy ships communicate.

Naval Postgraduate School (NPS) students’ work is about to be put to the test this Spring in a trial that has the potential to radically change the way the U.S. Navy navigates the information age.

A pilot program, “Compile-to-Combat in 24 Hours” (C2C24), will explore the boundaries of cloud computing to transfer data both within ships afloat and from shore to ship, freeing up vital communications links which are in short supply.

This would allow, for example, software updates to go out fleet-wide within 24 hours, versus the 18 months it currently takes.

“What we want to do is break down the way applications and content are delivered to the fleet right now, which is very old school,” Rear Adm. Danelle Barrett, the Navy’s chief information officer, recently explained in a Federal News Network interview.

The huge, monolithic applications the Navy currently uses for data transfers require constant reachback to shore via satellite, which she said is hard to do.

“When you lose that satellite link, you’re kind of dead in the water,” she said.

Two NPS former graduate students, Lt. Bruce Hill and Lt. Cmdr. Steven Debich, directly contributed some of the technology which makes such a goal possible. In March 2015, Hill and Debich each published a thesis on their research, respectively, into a new standard to compress data and how to optimize that data transfer via satellite.

Hill’s thesis evaluated how ‘Efficient XML’ (EXI) might be used as a better compression standard for large data transfers across the Navy: much more information would require far less bandwidth. Debich’s thesis then explored how EXI could be optimized within the Navy’s communications networks.

“It’s a perfect illustration of our students making a difference, of having a clear understanding of what it means to meet the fleet’s needs” said Dr. Don Brutzman, the students’ co-advisor along with faculty member retired Navy Capt. Scot Miller in the NPS Department of Information Sciences.

Hill and Debich’s work also shows how good research can require time, and the right conditions, to bear fruit.

The history of EXI dates back at least to 2006, when the World Wide Web Consortium (W3C) – the world’s primary international standards organization for the web – formed a working group to standardize a format.

Five years later, in March 2011, EXI beat out 40 other competing technologies and was adopted by the W3C as a formal recommendation, with Brutzman and students participating in the work. The purpose of EXI is to more efficiently compress Extensible Markup Language (XML), which is itself a way of compressing data. It’s a “language of languages,” Brutzman explained.

“The first thing EXI does is pay close attention to what kind of data it is,” he said. “We call it ‘data type aware’, so it can use the right compression for the right data ... The second thing it does is it takes advantage of the structure of the data, so as to compress it a whole lot further.”

By way of analogy, making a photocopy of a document doubles the amount of paper, but not the amount of information. EXI recognizes the structure of that information to avoid replication and cut out wasted space.

“It’s complex, yet at the end of the day we’re trying to squeeze the extra stuff out so we’re just getting the information we want,” Brutzman said.

Therein lies the core of EXI’s potential value to the Navy. Broadband cable isn’t exactly plentiful to ships at sea or to aircraft, which means satellite communications links are in high demand and may also be contested by adversaries.

“We have to be really, really efficient in how we send our messages,” Brutzman said.

From late March to early June 2018, C2C24 will push the envelope to see how efficiently an end-to-end cloud computing architecture could run. Theoretically, EXI will allow data standardization across the cloud, both in fielding software quickly from shore to ship as well as within a shared infrastructure aboard a ship afloat.

This “micro cloud” will allow a ship to retain essential data and use it without having to reach back every time to get more information. That information would continue to be available in the event of communications disruption, whether from sun spots or adversarial action.

“So if you lost that satellite link, which is critical to us, you would have at that point probably about 80 percent of what you needed to make operational decisions at that moment in time,” Barrett said.

The key take-away of the test will be the Navy’s use of open source or commercial cloud. Utilizing the open EXI standard opens the door to stability of compressed data over time: defense contractors come and go; expensive applications wax and wane, and with them proprietary information becomes lost along the way.

“The open standard for data means it never breaks,” Brutzman said. “It’s all about the data, not a company’s contract.”

Barrett draws a comparison to Apple Inc. Any user with the ability can develop an app, but it can only be shared through the Apple store if it meets the company’s strict standardized development language.

“If we set some of those parameters, if I standardize my data in an XML format, then what happens is I can automate the [Risk Management Framework] for the web service, because it becomes just testing that containerized piece of additional coding,” she said. “You don’t have to go back and retest the environment; that infrastructure is already accredited.”

With C2C24, Barrett is outlining a goal for the Navy.

“All you’re doing is taking what used to be big, monolithic applications and breaking them down into smaller web services that could quickly be accredited through an automated process,” she said. “We’re saying you should be able to do that within 24 hours from ‘compile to combat’, if you do it right.”

Barrett envisions an operational scenario where the Tactical Action Officer (TAO) on watch transiting the Strait of Hormuz may need course and speed information to determine, for example, when a weapon should be launched.

That same data may simultaneously be needed in engineering to determine whether maintenance on the equipment is appropriate to achieve that course and speed.

“There are multiple people who may be able to use that piece of data in the context of their roles,” she said.  “What we want to do is break down the data from the application and use that shared infrastructure afloat to store the data there and then use that information on the ship without having to reach back every time to get new information.”

The fundamental technology to make this happen is not necessarily new. Barrett herself authored a 2003 paper outlining a vision of a standards-based, enterprise architecture for the Navy which would ensure seamless transfer of information.

What has changed in 2018, she said, is people’s ability to understand such architecture, due partly to the ubiquity of micro web services in the commercial world and in each individual smart phone.

Ultimately, it’s about opportunity, she says, to capitalize on a great deal of work by researchers within NPS and beyond.

“For example, the NPS has pushed the Efficient XML piece and gotten it approved by the W3C,” she said.
“It’s a perfect storm of opportunity, a convergence of technology, standards and processes to be able to do this now.”

If the architecture with C2C24 proves right, Barrett sees its potential for use across the entire fleet.

“If it will work, end-to-end, in our lowest common denominator, which is the shipboard environment because of the bandwidth disconnect issues and where you have a limited amount – it can work anywhere,” she said. “It could work across the whole enterprise, and it should at this point.”