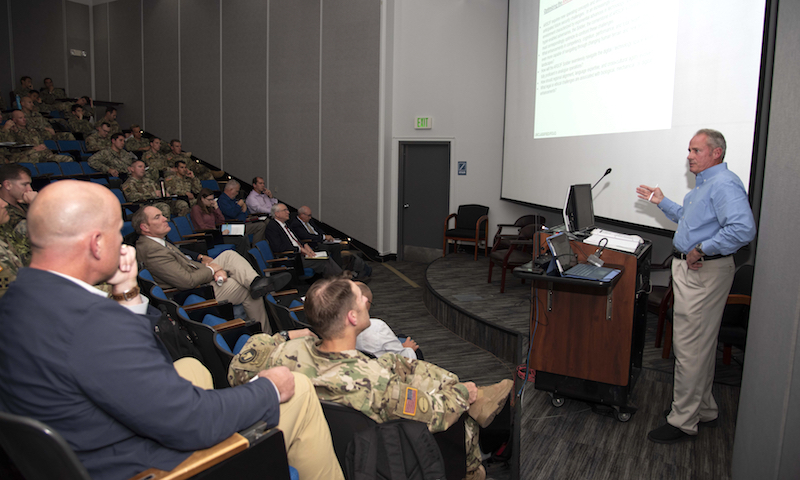 Students and faculty attend one of several command representative briefs during the NPS Defense Analysis department’s Research Week event in late August. The event provides an opportunity for a stronger connection between the needs of operational force, and the research of DA students and faculty.

The Naval Postgraduate School’s (NPS) Defense Analysis (DA) department hosted representatives from various Special Operations Forces (SOF) operational commands for a showcase of student research, Aug. 21-23. The department’s goal is to provide the operational SOF community with the opportunity to leverage the research capabilities of the department’s students and faculty.

“What makes NPS unique is we are a military installation conducting academic research, and so unlike a civilian university we are expected to produce capabilities by investing in our human capital,” said U.S. Army Col. Michael Richardson, NPS SOF Chair. “Bringing representatives from operational and institutional commands together in person with students and faculty members to interact is very important to keep our force informed of ongoing research.

“On the other side, we have the operational side of the force talking to the school and bringing both near-term and long-term priorities on chronic issues that they need to solve, keeping NPS aware of the problems out in the fleet and field,” he continued. “That way our students who want to work on something that will benefit the force have plenty of opportunity to do that.”

Now in its third iteration, the DA department’s research week included representatives from eight separate organizations, each presenting their respective, unique research areas of interest and potential challenges to students and faculty across the university.

Throughout the week, DA students in their first and third quarters engaged in more one-on-one conversation with the command representatives, demonstrating the capabilities of the DA department while also providing keen insights into potential thesis topics.

“In the case of Research Week, it is set up to target first and third quarter students to really give these officers both the insight and acknowledgement that what they are doing is well connected with what they have done in the past,” explained Richardson. “And for the third quarter students, it’s an opportunity to pick a thesis proposal that suits their interests and helps them make connections with command representatives who can help them with their work.”

In execution, the event is three days of meet-and-greets, brown bag presentations and detailed briefings. But the point of the effort is not lost on the attending SOF representatives, and the opportunity to tackle their most challenging problems.

“We hope to develop a two-way streak to get a return on the investment of nurturing these topics by getting them to a student who can benefit from doing that study, benefiting the DOD and my organization as well,” said Capabilities Analyst Brooke Tannehill, representing U.S. Army Special Operations Command. “We are bringing a variety of topics that are important to our command that need to be developed for the future to support the ARSOF [U.S. Army Special Operations Forces] operating concept.”

“Being afforded a student’s thesis that we have input in at the beginning can help inform a lot of future decisions,” said Tannehill, who had six students approach him, he says, interested in conducting theses related to the U.S. Army Special Operations Command’s (USASOC) priority topics.

“We are all about manning, equipping, and training the force, and if we get a thesis that is contemporary and forward thinking, that can really help with that,” he continued. “The potential for partnership is great and no matter what both sides are learning something.”

DA Research Week also focused on interactions between command representatives and NPS faculty in hopes of developing longer-term, foundational relationships that can be leveraged to investigate today’s great challenges, and tomorrow’s.

“Commands having a sustained relationship with faculty members will not only help solve problems the commands are trying to solve now, but also, those faculty members bring an incredible wake of students over time to address future problems as well,” Richardson said.

Of course, an NPS research showcase would not be complete without a laser focus on the efforts of current students, whose theses are nearing completion or already complete, set to graduate at the end of the Summer quarter in September.

“The main purpose of these presentations is to try and bestow some of the lessons learned to the students earlier in the process of writing their theses, as well as communicate to these command representatives what we are actually doing here at NPS,” said U.S. Army Maj. Alan Lancaster.

Lancaster, along with U.S. Army Maj. Thang Tran, used their thesis to offer a descriptive overview on Iran’s natural gas industry over the past year, as well as U.S. policy scenarios that would occur under different strategies ranging from a cooperation strategy to a competing strategy.

“If you employ one strategy over another, you may not achieve all of our prospective goals, so it has to be somewhere in the middle,” Tran said. “Our thesis tries to answer where that middle ground is, and that question depends on where the United States’ prioritizes our national interests.”

In the bigger picture, Tran added, their presentation is also about demonstrating to the SOF community, and current students, what their research should do, in a broader context.

“When you are with the operational force, you don’t have the time to think about these big picture issues because you are in the fight, taking care of soldiers. Here, you have time to step back and solve these interesting problem sets,” he said.

“A little over a year ago I sat through the same presentations, and I tried to take some of their advice into my research,” added Lancaster. “Every thesis is a journey that has its own dynamic set of challenges.”

Since the first DA research week in 2017, department leadership says the program has evolved, and will continue to, in hopes of fostering the critical thinking skills and specialized knowledge needed for graduates to prevail in today’s, and tomorrow’s, complex conflicts.

“Our institution is very unique,” stressed Richardson. “Unlike a civilian university, the men and woman who sign up to teach here and do research here are dedicating most of their adult life to studying these unique areas of security and defense issues.

“When you couple that with the fact that, on average, our students are career professionals with 8-12 years of service, it becomes an incredibly powerful capability to produce great thought,” he continued. “We apply that, through research week, to our SOF community’s problems so that these thought leaders can help produce answers that we can utilize ... And then, they go back to that operational force, talk about a double the payoff for your investment!”