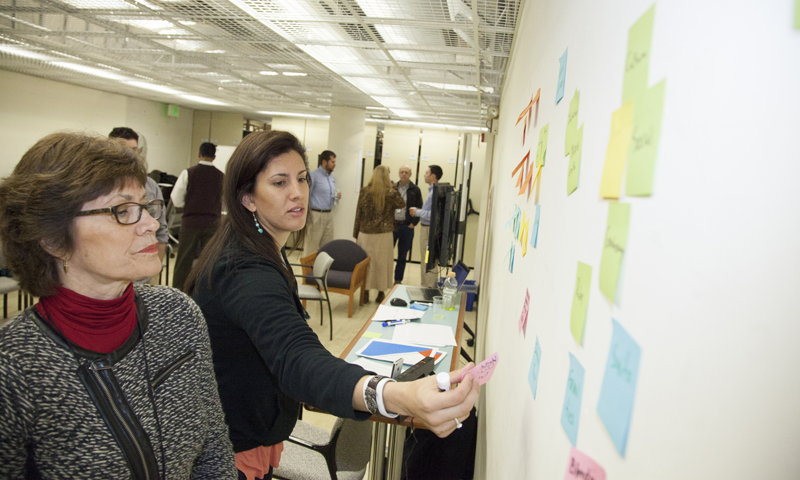 NPS Department of Defense Analysis Professor Nancy Roberts, left, discusses a design thinking exercise with one her students. As an emerging methodology, Roberts sees a great deal of potential in developing a creative problem-solving center at NPS, applying design thinking to pressing Navy and DOD challenges.

At a recent commencement address, Naval Postgraduate School (NPS) Department of Defense Analysis (DA) Professor and Chair Dr. John Arquilla discussed the “big, game-changing ideas” percolating at NPS, and one of them is happening right in his own department.

“There is a lot of ferment about design thinking in the services … At DA, we have made a major investment in design thinking because we think it is one of the next big things,” he said.

Longtime DA Professor Dr. Nancy Roberts is leading the charge to champion design thinking at NPS. She is the co-founder and a former co-director of the Common Operational Research Environment (CORE) Lab, an innovative research center that has pioneered major breakthroughs in the areas of social network analysis and the disruption of dark networks. If she and Arquilla are correct, NPS may be part of yet another game-changing initiative.

“I am being an entrepreneur again and Dr. Arquilla has been instrumental to the effort and a great supporter,” said Roberts. “Our ultimate goal is to make NPS the military’s creative problem-solving center using design thinking,” said Roberts.

Design thinking is a process of problem solving that is distinguished from other problem-solving methodologies by focusing on the ‘human in the loop.’ It relies on interdisciplinary expertise and encourages rapid, rough prototypes with end user feedback and involvement. The key is to embed the problem in context and to understand how people who live with the problem experience it rather than rely on those far from the problem to define and solve it.

“We are helping people to empower themselves, to be entrepreneurial, creative, problem solvers … It starts with teaching them how to frame problems, and then encourages them to be creative in generating their own solutions,” said Roberts.

Roberts has been working tirelessly to encourage design thinking labs at NPS and has pulled together four design spaces around campus with neither dedicated funds nor resources. She is also working with Stanford’s Design School and with the Palo Alto, California based IDEO global design firm.

She shared an anecdote from the Stanford Design School that is indicative of the design thinking approach. Health care providers in Nepal contacted Stanford’s Design School for assistance after a spike in infant deaths due to what they believed were faulty incubators.

According to Roberts, traditional problem solving would have focused on the incubators themselves, but when design thinking was applied to the problem, an interdisciplinary team was able to determine that the problem was not faulty incubators, but rather the loss of infant body heat that occurred when young mothers brought their babies from remote areas to Nepalese hospitals.

Once the real problem was identified, the team began to prototype solutions to keep babies warm. But in maintaining their focus on the ‘human in the loop,’ the team quickly realized any prototype built would have to utilize local materials and be affordable. Team members eventually came up with a design wherein a product was boiled and used as a temporary heater that could be slipped into an infant papoose to keep babies warm during transport.

Roberts first introduced the design thinking process to NPS in her Wicked Problems class. And she began to notice a change in her students as they used the process to explore a series of complex problems.

“People have to understand themselves and recognize that they can be creative problem-solvers. Once they experience the design process, they get a sense of self-efficacy that gives them the confidence to innovate and get things done.

“It’s about building up trust in themselves,” continued Roberts. “All of the sudden, they realize that they don't have to have permission to be innovative, or to try something new – they can just do it. There is a shift in identity that occurs when people go through this process.”

NPS’ first course entirely dedicated to design thinking was introduced last summer and several of the thesis projects that came out of that course have received considerable attention.

U.S. Navy Lt. John Hayes used design thinking to create an innovative website dedicated to Explosive Ordnance Disposal (EOD). He wanted to develop a site that deviated from the typical, top-down, list-based website used throughout the military. He did this by opening up the creative process to a wide group of interested stakeholders from across the DOD.

“I created a prototype website to demonstrate an idea … It looked at many items related to EOD and created a knowledge forum where people could come together,” said Hayes. “As an EOD officer in the Navy, one of the interesting things about our work is that we are working more and more often in joint environments. I went to a Navy school, on an Air force Base attended by Army soldiers.

“The CIA, FBI, and the military all have EOD equivalents, and a lot of people are thinking about the same problem, but we are not really sharing information, at least not effectively,” continued Hayes. “We have a lot of knowledge silos. We say we are sharing, we say we have lessons learned, but at the end of the day, a lot of these knowledge portals are just places where information is dumped and not really shared.”

Hayes’ solution to the information-sharing problem was to create a Google Plus-based webpage where a select group of EOD and homeland security professionals could share ideas. At issue, amongst other things, was a growing body of EOD specific literature whose sheer volume was overwhelming practitioners.

“If I were to list all the publications that I as an EOD officer need to know, the list of publications would be 8-10 pages long,” explained Hayes. “So I opened up my site to people and solicited their thoughts. I came up with some outlandish ideas, but design thinking does not have bad ideas. Sometimes the solution you need is found by having someone explaining why an idea is wrong.”

As members of the group began to provide Hayes with feedback, a product began to emerge that drew upon the strengths of social network sites like Facebook and Twitter.

“The idea was to almost copy Facebook in a way. People created a profile so that if you are talking to someone, you know who they are and you are able to validate what they say. It was a successive process where we drew upon others’ ideas to create the final product.

“My website allows people to talk both ways. Users are able to reach out to each other and can create value for themselves without the traditional method of having one person in charge. We are creating a community of practice,” said Hayes.

“The idea was to figure out how to build a collaborative, problem-solving ability within the country teams,” said Roberts. “IDEO got excited about what we were doing and offered to sponsor research and consult with our students who were working in Indonesia, the Philippines and various other overseas interventions.”

As Roberts’ students began to see the utility of design thinking, interest at NPS grew.

“My students kept saying, ‘we want more’ but there was no more … then Dr. Arquilla and I launched a year-long program with [Army Chief of Staff] Gen. Ray Odierno to apply design thinking to figure out what the Army should look like in 2020,” said Roberts.

“When I met with Gen. Odierno several years ago he quickly became very enthusiastic about the idea of design thinking. And he asked Dr. Roberts and me to work on a strategic redesign of the Army,” explained Arquilla. “We brought together a small team of faculty and students from across the campus and across the services to work on this problem for him and his Strategic Studies Group.

“Today, the Army is designed around a relatively small number of relatively big things, a couple dozen brigade combat teams. We thought it might be better to redesign the Army so that it was comprised of a large number of little things,” said Arquilla. “Technology is making even very small units very powerful. Their connectivity and access to very smart weapons allows us to operate effectively at a much smaller scale.”

But the Army is not the only service that NPS is helping to utilize design thinking; Chief of Naval Operations Adm. Jon Greenert has also expressed interest.

“[Greenert] has been emphasizing the development of strategic thought within the Navy and is in the process of establishing a design thinking group around him,” said Arquilla.

There are similar efforts in the Special Forces community, Arquilla added, where Special Forces operators are applying design thinking to questions common to small units and to the rethinking of irregular warfare strategy and doctrine. He believes that current budgetary and manpower restraints make design thinking particularly relevant to the DOD and points out that much of the debate surrounding the Navy’s adaptation to current fiscal and strategic realities is occurring at NPS.

“Dr. Roberts and others who are addressing this subject are performing an incredible service for the DOD. This can only be a good thing,” noted Arquilla. “We know that defense personnel and resources are going to be reduced but our problem sets remain the same. Design thinking will be a combat multiplier as we try to maintain our engagements around the world.”