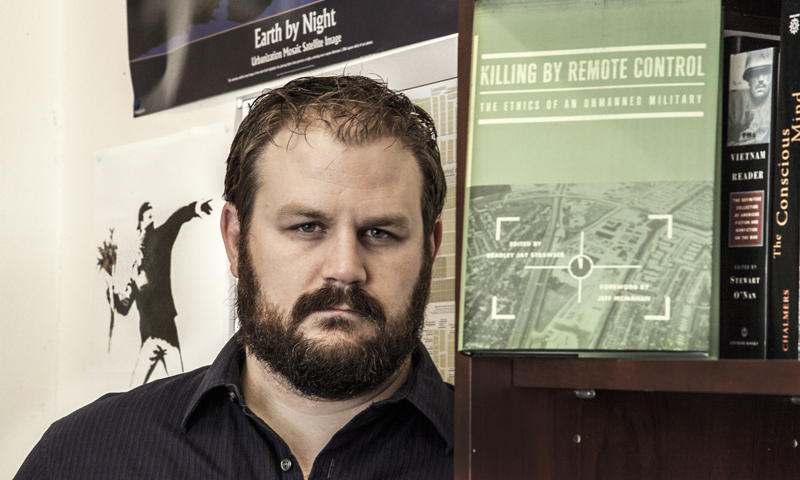 Dr. Bradley Strawser, an Assistant Professor with the NPS Department of Defense Analysis, is pictured with his new book, “Killing by Remote Control: The Ethics of an Unmanned Military.” The book is a compilation of the works of 10 contributing experts in their respective fields that addresses the many dimensions of unmanned systems, and the role they play in military operations.

With so many lingering questions surrounding the ethics of drone warfare, NPS Department of Defense Analysis Assistant Professor and ethicist Dr. Bradley Strawser saw an opportunity to further the conversation. His new book, “Killing by Remote Control: The Ethics of an Unmanned Military,” addresses the many dimensions of unmanned systems, and the role they play in military operations.

A compilation of the works of 10 contributing experts in their fields, the book looks at such topics as just war theory, martial virtues, the morality of lethal autonomy, and the use of unmanned systems in humanitarian operations.

“I brought together a mix of philosophers, political scientists and legal scholars to address moral questions about drones that have been out in the national discussion for a long time, but nobody has ever sat down and done an intense analytic dissection of the issues,” explained Strawser.

“I’m excited and proud of it because it really pushes the debate on drones forward,” he continued. “Most of the books out there on drones are either specifically about the law, or they engage questions on specifically-U.S. policy. This book is not that. It is really asking the deeper moral questions behind this form of warfare in general.”

Among those questions is that of the idea of bravery and courage for warfighters who may not actually be in harm’s way. Remotely piloting vehicles removes the risk of physical harm, but it also creates an asymmetry in warfare that raises questions of the moral implications. They are easy enough topics to discuss abstractly, but the reality of the issues surrounding unmanned systems are very real and of serious concern to ethicists like Strawser. The DOD agrees and has begun in recent years to emphasize the moral and ethical considerations of warfare.

“There is a Tennyson line that says, ‘Theirs not to question why, Theirs but to do and die,’” Strawser explained. “That old mindset is going away and people are saying ‘no, military officers do need to be thinking about the morality of the wars in which they fight and the ethics and right and wrong of the military’s actions.’

Beyond the conversations in his ethics class, Strawser is pleased by the traction the topic has gained globally. The issues surrounding drone warfare have been so prominent and dynamic that he and the other contributors had to evolve their content as the issue progressed. He sees this as a good sign that defense leaders and scholars are ready to delve into the issues, or at least begin to.

“What I really hope this book does is pose and frame the big questions. This doesn’t solve all of the ethics questions about drones, in fact it just kind of opens the debate on a lot of it,” he said. “We are still just at the very beginning, the tip of the iceberg of the ethical questions surrounding drone use. But this is really the first academic book of its kind to look just at the abstract moral question of drone use in general. It is critical that this part of the debate be moved forward, and that is precisely what I hope this book will do.”