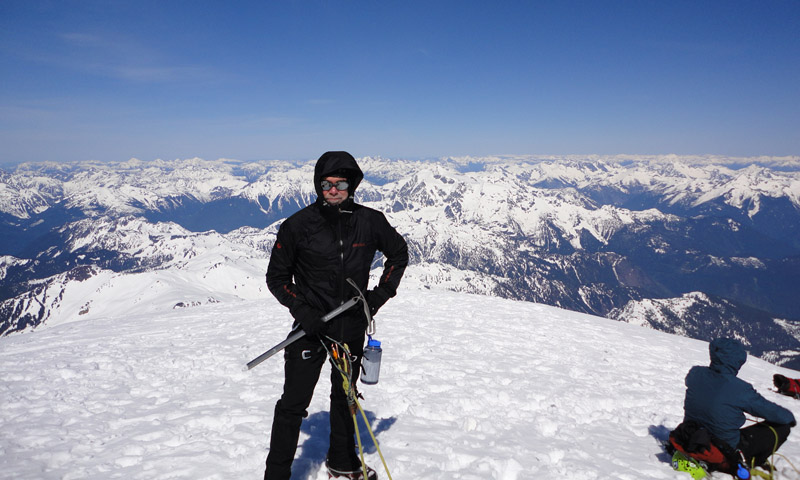 NPS Department of Defense Analysis Professor Dr. Gordon McCormick, an avid mountain climber, is pictured at the summit of Mt. Baker in the northern Cascades of Washington state during a recent ascent. McCormick has joined a short list of winners of the USSOCOM Medal, one of the highest honors a civilian can receive from the command.

There are many occasions when a star pupil returns to his or her alma mater to pay tribute to a key teacher, a mentor who played a significant role in the educational experience. But rarely has that star student become one of the most prominent figures in DOD circles.

That was exactly the case, however, when NPS alumnus Adm. William McRaven, head of the United States Special Operations Command (USSOCOM), presented defense analysis Professor Dr. Gordon McCormick with the USSOCOM Medal. The award is one of the highest honors the command can give to a civilian, and is rarely awarded, given only to select individuals who have made significant contributions to the defense of the U.S. through special operations during war or peacetime operations.

In what was a surprise addition to McRaven’s visit to campus to address NPS students, and a self-described “intelligence failure” by McCormick, his old student succeeded in bestowing one of the top honors USSOCOM can give without his prior knowledge.

“It was a surprise, but I don’t really consider it to be a recognition of me … More so, it is a recognition of what our department has been able to accomplish on behalf of USSOCOM,” McCormick said. “Truthfully, it is a mark of validation that the command appreciates and approves of what we are doing.”

Quick to point out that the success of NPS Department of Defense Analysis (DA) programs is a team effort, McCormick notes that his receipt of the medal is due to the hard work of a growing group of highly-talented faculty and staff, and constant contact with their sponsoring Special Operations Forces (SOF) community.

“Although my name is on the award, this is without question a team effort, and it was given to me in recognition for what our department, and our institution, has done collectively for the Special Operations command,” McCormick said.

“We have also been fortunate to maintain a strong connection with our sponsoring community,” McCormick added. “Nearly every month, we have leaders from across the [Special Operations] community visiting our department, learning about the program. It keeps us relevant, and it evolves the program. And they have always been very supportive of our efforts.”

The current defense analysis effort began as a curriculum in Special Operations/Low Intensity Conflict (SOLIC), created by McRaven and McCormick while the former completed his studies at NPS … McRaven would be the first graduate from the SOLIC curriculum in 1993.

McCormick recalled a number of key figures who, over the past 20 years, have allowed the effort to thrive. He points to former NPS Provost, Dr. Richard Elster, who had the foresight to transition the curriculum to a department in early 2001, before the terrorist attacks of 9/11 brought a high demand for its expertise. The late Gen. Wayne Downing, who was head of USSOCOM from 1993-1996 when the curriculum was just beginning, was instrumental in driving the broader, multidisciplinary focus that defines the program today.

And, McCormick adds, McRaven himself could easily have his own name on the award for his role in creating the program.

During his presentation of the award, McRaven offered a summary and testament to the impact the SOLIC curriculum, and the DA department, have had on his community.

“We established the Special Operations/Low Intensity Conflict curriculum about 20 years ago, now part of the defense analysis department. Since that time, we have put over 900 students through that course,” McRaven said. “Those students are from the international community, from the enlisted community, from the officer community of all services, and have really shaped the future of U.S., and I think, international special operations.

“When we started, I’m not sure we felt that it would go too many years, but it just seemed to be the right thing to do at the right time,” McRaven continued. “And it went 20 years, frankly, because of one man. So today, I would like to take the opportunity to recognize Dr. Gordon McCormick for his contributions not only to the curriculum here at the Naval Postgraduate School but for what Gordon has done to shape and influence the U.S. Special Operations Command.”