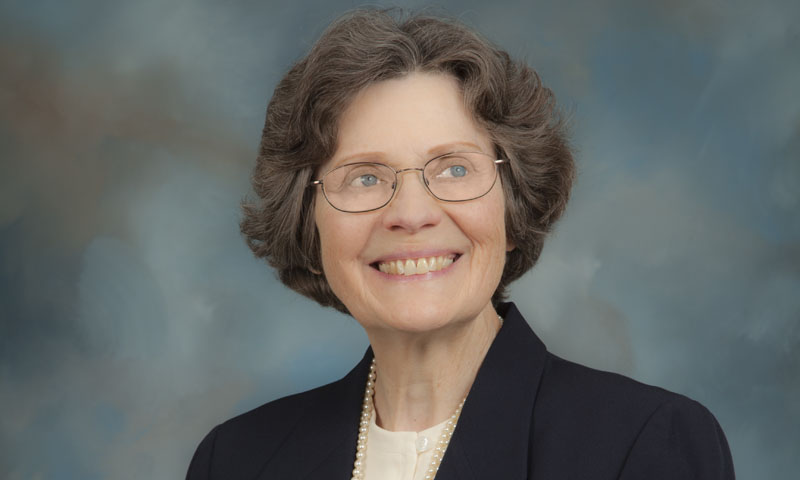 NPS Defense Analysis Distinguished Professor Dorothy Denning has been inducted into the National Cyber Security Hall of Fame’s first class. Denning is among 11 professionals selected from across the country for their contributions in cyber technology, policy, education, public awareness and business.

In a nod to the dedication and influence of one of the Naval Postgraduate School’s exceptional faculty, NPS Department of Defense Analysis (DA) Distinguished Professor, Dr. Dorothy Denning, has been inducted into the National Cyber Security Hall of Fame’s first class. The group of 11, honored during an official ceremony on Oct. 17, were nominated and selected based on criteria that, among other things, distinguish them as leaders and innovators within the cyber security community.

"Dorothy Denning's induction as one of the first members of the National Cyber Security Hall of Fame is an indication of the impact her body of work has had on the information security community over her decades in the field,” said DA Chairman and Professor, Dr. John Arquilla. “Having her on the faculty is a great addition to the DA department, both increasing our academic diversity and enlivening our Joint Information Operations and Irregular Warfare curricula.

“Cyber security is a field of growing concern for the defense community, and cyberspace itself has, within the past year or so, been officially recognized as a warfighting domain,” he added. “It’s essential for our students to understand how to think critically about the challenges that come with this new strategic domain. Nobody supports this mission more effectively than Dorothy Denning."

Denning joined NPS in 2002, after teaching for 11 years each at Georgetown University and Purdue University. She also spent eight years working in industry. She first became engaged in information security as a Ph.D. student at Purdue in the early 70s.

“There wasn’t a lot going on in this field back then. You could actually know everything that was going on, because there wasn’t much,” Denning recalled. “And there were just a handful of people working in the field, so you could know who they all were and read all of their papers. There weren’t any conferences. There weren’t any magazines or journals on the topic. The field has just skyrocketed since then.”

Today, NPS boasts a strong program in cyber security, with expertise coalesced into the Cyber Academic Group, of which Denning is a member. The group encompasses faculty from several departments, including computer science, electrical and computer engineering, operations research and many others. Students in the new Cyber Systems and Operations program are taught the elements of both offense and defense in cyber affairs, and are given the opportunity to take part in wargaming exercises to strengthen their understanding and preparedness.

Denning teaches two cyber courses in the DA department. The first, titled “Conflict and Cyberspace,” covers the technology, policy, law and ethics of cyber conflict, addressing such topics as cyber warfare, cybercrime, hacktivism, cyber terrorism, and state control over cyberspace. The course was originally designed for DA students seeking a broad perspective on the field, but serves students in the cyber programs as well.

“Students in the DA department are coming to our programs for a broad education that’s not so technology focused, looking at things on a broader strategic level,” Denning noted.  “So the course is aimed at getting at the issues and finding out what is going on at an international level.

Also selected for the first hall of fame class was former NPS Associate Professor Roger R. Schell, who served three years in the late 70s as a military instructor in the university’s computer science department. He and Denning entered the field relatively early on, and both have seen tremendous growth and value as the cyber domain becomes one of critical importance to the Department of Defense.

“The value of educating military leaders in computer security was evident even then,” Schell said. “One of my students, Philip Myers, wrote a thesis entitled, “Subversion: the Neglected Aspect of Computer Security” that went on to be required reading for their senior staff when the government subsequently created the National Computer Security Center at NSA a few years later.  The significance of cyber security has only increased since then, and well-informed military leaders are even more important today.”

Denning, Schell and the nine other National Cyber Security Hall of Fame selectees were officially inducted during a ceremony in Baltimore, Md., on Oct. 17. The Hall of Fame was created to recognize key players from across the country for their contributions in cyber technology, policy, education, public awareness and business.