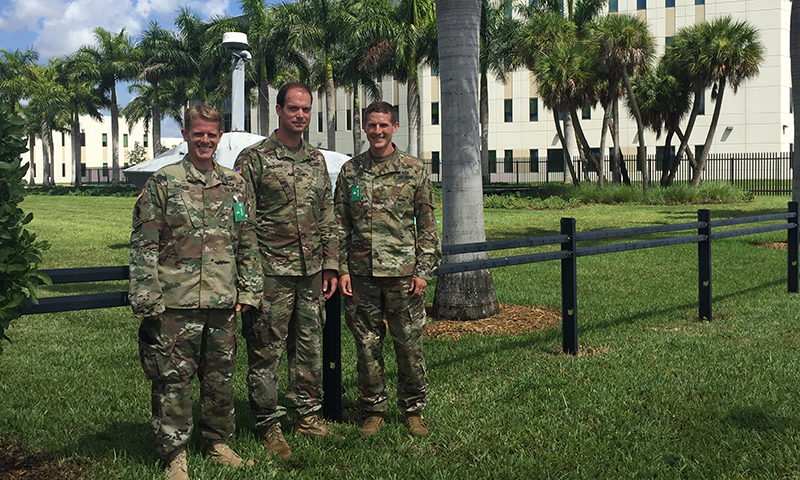 Thesis research in social network analysis by NPS Department of Defense Analysis students U.S. Army Majs. Matthew Bauer, Andrew Maggard and Robert Murray caught the attention of senior leadership at the U.S. Southern Command (SOUTHCOM). In fact, the trio of students traveled to Florida to provide a personal brief on their work to senior staff members at SOUTHCOM, as well as U.S. Special Operations Command South (SOCSOUTH) and 7th Special Forces Group, in early this August.

Their research largely focuses on using social network methodologies to discover the influence of foreign state actors within a social movement known as the Pink Tide. The trio focused their efforts on several populist, leftist governments with anti-U.S. policies on economic and security initiatives that came into power during the mid-2000s.

“When we first arrived at NPS we wanted to do thesis work that was operationally relevant to SOCSOUTH and the geographic Combatant Command in SOUTHCOM, and after working with our thesis advisors and reaching out to the future plans officer of SOUTHCOM they agreed to sponsor our research,” said Bauer. “During that time, we attempted to apply a new methodology to look at the conversions between transnational and transregional threat networks and how they apply to populist, leftist movements in Latin America.”

Their initial findings included a year of research into congressional testimonies, articles and political websites in an attempt to structure the unclassified data, all in the hope of reaching the largest audience possible.

“Currently, SOCSOUTH is really focused on a term called mapping the human domain, so rather than looking at terrain analysis, we looked to see who these key players are in an overall network,” said Murray. “What the Pink Tide did was really establish a metaphorical highway which allowed external actors to gain access to influence in this area. To determine this, we looked at social science methodologies to look at the relationships between different organizations and governments to see if there were points of conversions where hostile actors were leveraging influence into Latin America.”

The team largely credits the influence of NPS’ defense analysis department, who has brought on a new cohort of students to help continue the project while focusing on different threat streams, while further fostering a relationship between SOUTHCOM, SOCSOUTH and NPS.

“It was because of the understanding of the methodology and software that we acquired from all the work we did at the CORE Lab here that made this all possible,” said Murray. “That, along with advisors who were very influential on connecting us with the staff at SOCSOUTH and SOUTHCOM, gave us what we needed to conduct this network analysis research.”
Categories Navigation
NPS Departments/Academic Groups
Schools
Type
News Archive TodayatNPS Title