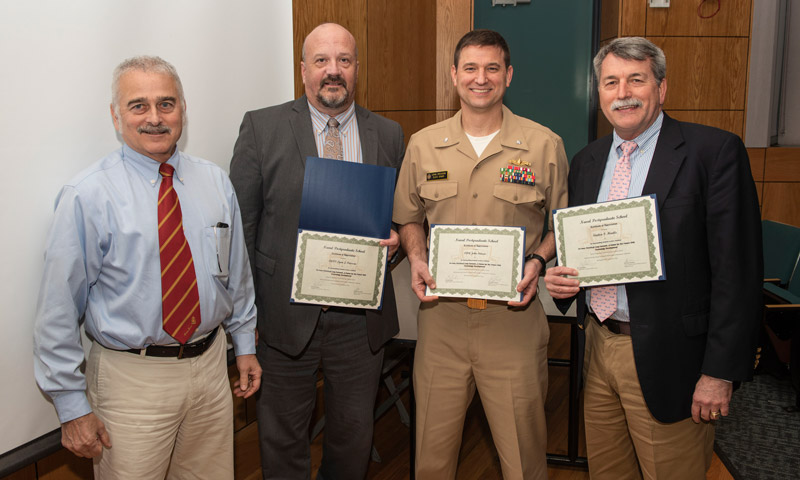 A group of energy officials from across the Navy teamed up to provide the NPS community with an overview of the Navy’s future electrical energy technology development during the latest Defense Energy Seminary, Nov. 2.

The talk focused heavily on updating the power and energy requirements throughout the fleet to take better advantage of upcoming changes in technology, including energy weapons like lasers and stochastic electronic warfare systems, radiated energy systems such as the Air and Missile Defense Radar, and advances in kinetic energy weapons including electromagnetic railguns.

“We have determined that power is the foundation of the kill chain of the future, which means directed energy weapons and sensors are all dependent on power and energy,” said Markle. “So, we are here to talk about where the Navy is headed in 30 years.

“Think of science fiction moves,” he continued. “There are people in this room that are working on technologies like rail guns ... We are bringing science fiction into reality today.”

“Our job at ONR is to give our warfighters an unfair technical advantage,” added Petersen. “If we give them an equal playing field with our adversaries, we as scientists and engineers have not done our jobs. We at ONR are here to try to address those gaps so we can mature the technology and hand it off to the next step.”

Part of that technology development includes the evolution of systems designed to handle the electrical requirements these new systems require. The team discussed the Integrated Power and Energy System (IPES), for example, which is a medium-voltage, direct-current (MVDC) system that offers the potential to provide significant warfighting capability at an affordable cost.

Ultimately, the officials agreed, ensuring the officers and scientists at NPS are well versed in these technologies helps ensure their integration into the fleet in the not-so-distant future.

“The operators on future naval platforms will have to think about power when they fight the ship in ways that they don’t necessarily have to think about right now,” said Stevens. “These young officers are the ones managing, building and operating our future fleet, and it’s important for them to understand how to operate what new technology is being introduced, because they will be the ones living with it.”