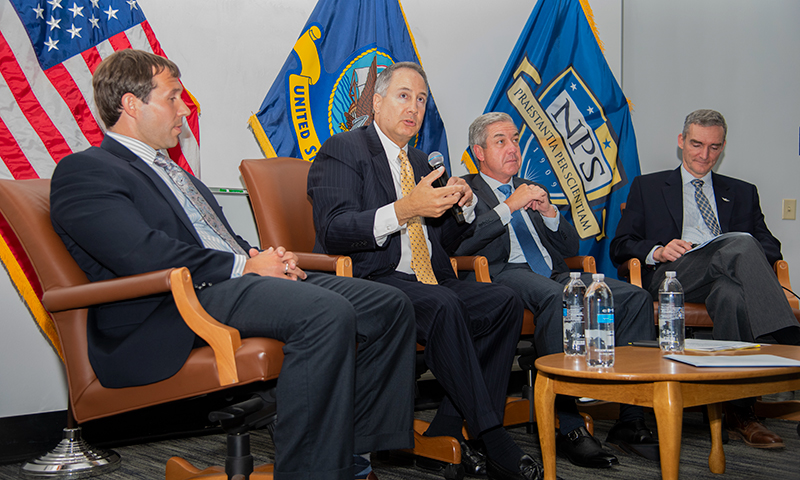 The Naval Postgraduate School’s (NPS) Graduate School of Business and Public Policy brought together two captains of industry for a panel discussion titled “Challenges of Innovation in Defense Acquisition” in Ingersoll Hall, Aug. 13. It was an opportunity for students in the university’s acquisition and management programs to hear from seasoned acquisition experts.

Jerry DeMuro, CEO of BAE Systems Inc., and Mitchell Waldman, Executive Vice President of Huntington Ingalls Industry, brought years of experience to the discussion, with NPS’ own Director of Cybersecurity, Robert Sweeney joining the panel and GSBPP Professor of the Practice Ray Jones serving as moderator. The panel jumped right into a challenging question on how to meet the rapidly evolving needs of the warfighter.

“We’re going to focus on innovation effectiveness and shaping the force for today’s challenges in great power competition,” stated Jones. “We often hear that the defense acquisition process needs to move faster and adapt to the speed of relevance. From your perspective, what are some of the key enablers and detractors that formed this view and where should the DOD focus its resources to optimize return on investment (ROI) in the context of defense?”

“We all know what the end objective is ... Superiority, dominance and to be strong enough to where no one will threaten us,” said DeMuro. “And if we do compete in any spectrum, we’re going to be successful and overwhelming. We all understand that, but how we get there is the question. That’s where the competing interests comes in.”

The DOD is spending money on discovering new and innovative ideas to increase speed of product to the warfighter, says DeMuro, but he is quick to point out the immense regulations governing the industry.

“We have to get a line on what the objective is, and what’s best way to get there,” he continued. “And we need to do that in a transparent and fair way, as these are public funds, with competing interests.”

Waldman offered an example of effective partnering between the DOD, industry and others in the undersea warfare domain.

“I offer to you that we actually have examples of doing things with the speed of relevance as the CNO says. The SSGN program is one such as example,” said Waldman.

“We converted Trident missile carrying submarines to submarines that can launch Tomahawk missiles, and we did that very rapidly, with public shipyards, teaming with industry,” he continued.

“Why was that different? It was different because we got an edict from the White House that said do this, we had support from Congress that said here’s the money to pay for it, and more importantly we were supported by DOD to align all of the processes to work. In a period of less than 36-months, we had a program in place, we had inducted the boats and we were well on our way to delivering that capability to our nation.”

Waldman also pointed to the modifications made to the Mine-Resistant Ambush Protected (MRAP) light tactical vehicle designed to withstand improvised explosive device attacks. He again pointed to the alignment of the Congress, the White House, the DOD and the execution agency.

“I would say that when the system aligns, we can do it,” said Waldman. “We don’t obviate oversight, we don’t obviate good governance in industry or in the government. But what we do, is work as a team, and that’s one of my messages to you here today. Having worked in government, industry and the Hill, it’s a collaboration.”

Prior to his position at NPS, Sweeney was the lead system architect for the Joint Strike Fighter Modernization Program at the JSF program office and chaired the panel which developed the open system architecture of the Future Airborne Capability Environment consortium, to enhance interoperability and software portability for avionics software applications across DOD aviation platforms.

Sweeney was able to share a different perspective, saying that many times program managers bite off too much of the apple all at once.

“Our acquisition system is built around large programs and large weapons systems,” said Sweeney. “I think if we were to plan out how we acquire our systems ... and breakdown the requirements into smaller functions that address particular capabilities instead of trying to field an entire system all at once, it would help speed up innovation and get things out to the field quicker.

“However, there is a trade-off,” he continued. “It wouldn’t be as beneficial for our industry because it would take multiple contracts and there is necessarily no guarantee the same company would win follow-on awards for the next capability.”

Each of the panelists agreed that relationships and integrity play critical roles in success. The community of defense acquisitions is large, but as managers and leaders, you will see familiar faces throughout your careers.

“This is the key message I want to leave you with ... You are who you are, and your calling card is your integrity,” said Waldman. “It doesn’t mean you don’t do hard business. We’ve all been on different sides of the table, and negotiations should all be transparent and you should do your best. But in the end it’s done with respect and integrity as relationships persevere.”