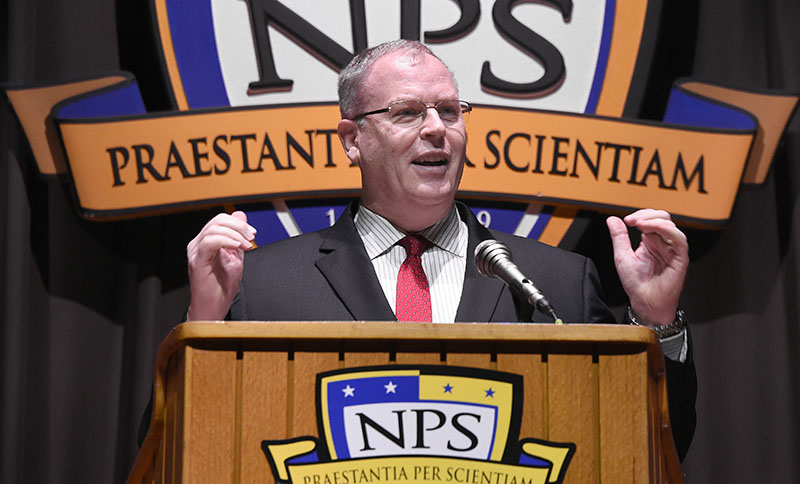 NPS President retired Vice Adm. Ronald A. Route welcomed Work and challenged the assembled student body to recall the purpose of their studies, as they leave NPS prepared to do great things.

“On a day like today, while you reflect on your accomplishments and look ahead towards an uncertain future in a changing and often violent world, we are reminded of our call to service. It is our hope and expectation that you leave here prepared to serve, and prepared to do something great,” said Route. 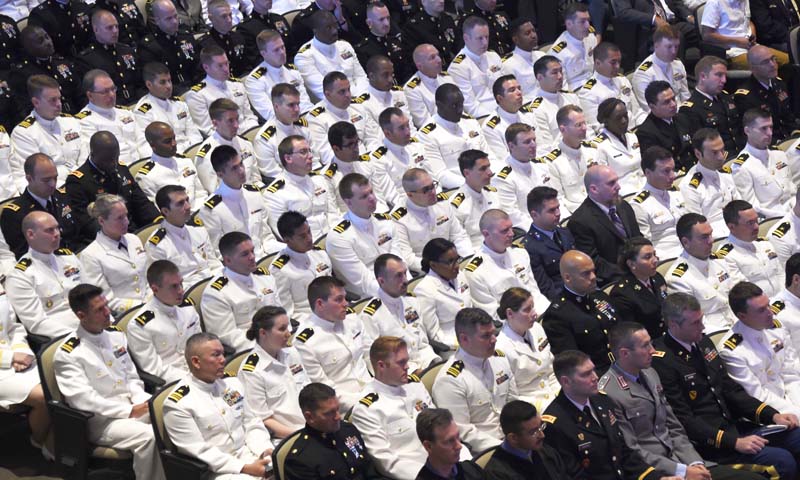 NPS students listen to a commencement address by Deputy Secretary of Defense and NPS alumnus the Honorable Robert O. Work during the Spring Quarter Graduation ceremony at King Auditorium, June 19. Some 290 graduates from every U.S. branch of service and 19 countries, earning 296 advanced degrees, were recognized at the ceremony.

Prior to addressing the graduating class, Route and NPS Provost Dr. Douglas Hensler presented Work with NPS’ Distinguished Alumni Award, noting Work’s “extraordinary leadership,” his contributions to military service, and his “unsurpassed and continued support of graduate education and the Naval Postgraduate School.” For work, returning to NPS was a homecoming of sorts. He is a graduate of the university’s Space Systems Operations program and started a family here while completing his graduate education. He was pleased to be away from the Pentagon and back in Monterey. “When my friends and family ask me about what it’s like to be the Deputy Secretary of Defense, I remind them of the tethered goat in Jurassic park,” he quipped. “Any time I can escape the game reserve known as the Pentagon, I know it is going to be a beautiful day.

“I have so much affection for this institution and so much respect for its graduates,” he continued. “There is absolutely nothing more important to the future of our security establishment and the future of our great nation than preparing our future leaders.”

During his address, Work offered the assembled student body an assessment of the current state of U.S. military superiority. He discussed the challenges that the U.S. is facing as its “unipolar moment” as the world’s sole super-power comes to an end and rival nations begin to assert themselves across the world stage. "We are at a pivotal moment in our history. We are coming out of more than 14 years of hard fighting, including the longest war in our nation’s history,” he said. “We are witnessing a more multipolar world where American leadership is being increasingly challenged, perhaps no more so than in the military realm.

“Such challenging and uncertain times demand that America’s best and brightest step forward to serve and to lead,” Work said. “Because, to preserve the peace, we must continue to demonstrate our ability to project combat power anywhere in the world, no matter what threats we may face. We do so because that is what our friends and allies expect of us. They expect us to lead.”

Work also noted that innovation is at the heart of maintaining U.S. power.

“Since World War II, the United States has enjoyed unrivaled technological superiority,” he said. That lead “is eroding at a pace too fast for comfort, and as a result, the margin of battlefield overmatch we have long enjoyed is becoming ever slimmer.”

Work challenged the graduating class to be innovative and to seek new solutions and better business practices before congratulating them on a job well done.

"To all of you, BZ, well done, and to our many international students, I hope you had a rewarding stay here at NPS … You bring an important diversity of views that American’s must have and value in today’s global security environment,” Work said. “We will not always see eye to eye in every challenge we face around the world … [but] someday, in some unforeseen way, the relationships and understanding that you forged here today will serve both of our countries well.”

“To the American Soldiers, Sailors, Airmen, Marines and DOD civilians here today, I want to thank you for stepping forward and choosing to serve our country during this difficult period in our nation’s history,” Work concluded. “You are part of a proud tradition of voluntary service that extends back to the continental Army and Marine Corps. The secretary and I and the entire nation are absolutely grateful everyday for your willingness to serve.”