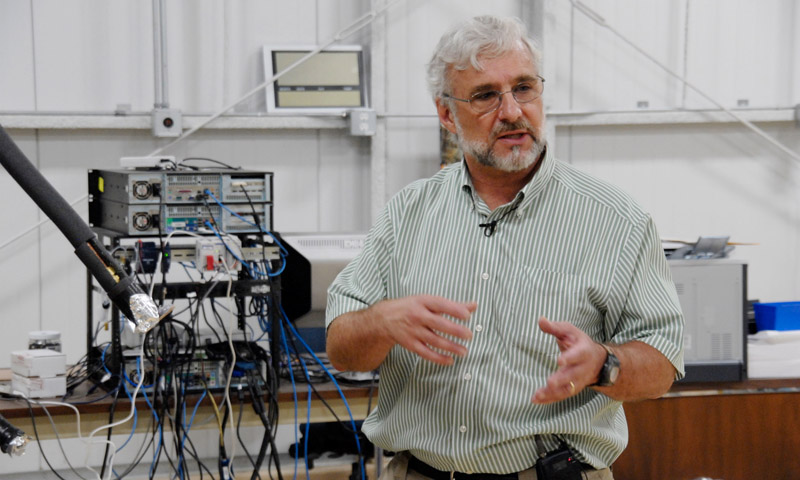 NPS Research Associate Professor Richard Swent, pictured in the Free Electron Laser (FEL) lab, helped lead the FEL program to another when the team achieved the first successful acceleration of an electron beam in a superconducting spoke cavity.

The Naval Postgraduate School’s long history in Free Electron Laser research reached another milestone late last year when the team achieved the first successful acceleration of an electron beam in a superconducting spoke cavity. The exciting achievement took place in the testing facility for Niowave, Inc. – the manufacturer of the university’s superconducting electron gun – located in Lansing, Mich.

NPS Research Associate Professor Richard Swent of the physics department has been working with Los Alamos National Laboratory and Old Dominion University on an Office of Naval Research (ONR) funded project to design a spoke cavity that would accelerate the particle beam in a more efficient and compact way than accelerators of the past. For the Navy, such advancements could mean eventually using the capabilities for shipboard laser defense.

“What they tested was a kind of superconducting accelerator cavity that looks like it has promise for certain applications, particularly high-vibration applications, like on a ship,” said Swent. “Because the standard geometry for superconducting cavities is kind of flexible, there are problems with vibrations.

“If you are operating in a national laboratory, or a laboratory like the one at NPS where you have a big, thick concrete floor, you can mount everything rigidly so that vibrations don’t bother you. But you can’t always do that, so they invented this whole different shape of cavity that’s much more rigid,” he continued.

Swent added he was very pleased to see this significant progress made, having served as an advisor on the design and testing of the spoke cavity.

“This was the first time that one of these so-called spoke cavities had accelerated a beam,” he said. “They had done some testing on them before, but they had never actually gotten to the point of using one as an accelerator.”

From here, Swent is continuing to work with the group on the next phase of the project, which will look into beam dynamics simulations, and the design of beam transport systems and diagnostics.