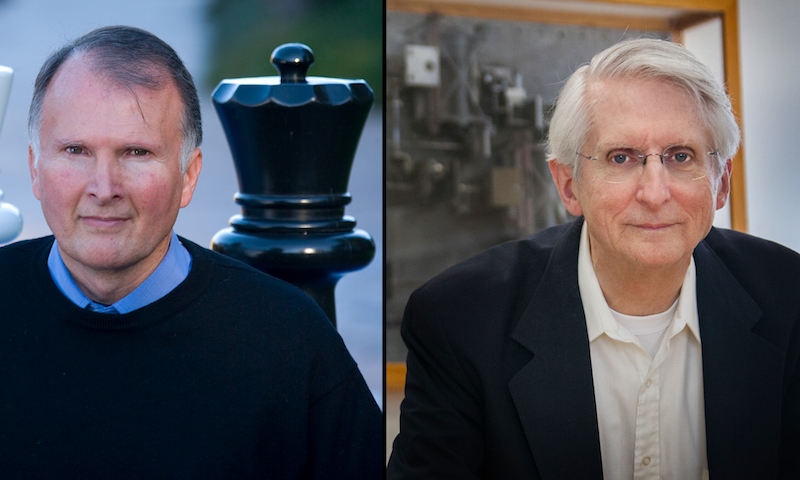 Announced April 19, Distinguished Professors Peter Denning and John Arquilla, respectively chairs of NPS’ Computer Science and Defense Analysis departments, were selected as the winners of this year’s NPS Foundation/U.S. Naval Institute (NPSF/USNI) Essay Contest for their submittal, “Sea Power and Automation,” which provides a roadmap to navigate the fleet-wide changes ahead.

“Our view is that automation will have as profound an effect on naval affairs over the next 80 years - that is, the rest of the 21st Century - as the aircraft carrier has had over the past 80 years," Arquilla said.

Since 1878, essay contests fostering the professional development of the nation’s naval officers have been a mainstay of the U.S. Naval Institute (USNI).

“From the NPS Foundation’s standpoint, having Dr. Denning and Dr. Arquilla receive this award is another indication of the tremendous talent that the faculty of NPS has,” noted Richard Patterson, NPS Foundation CEO. “The Foundation is very pleased to have them recognized this way.”

As some of the world’s foremost authorities in their fields, Denning and Arquilla bring a wealth of understanding to the question of integrating automation into the U.S. Navy.

Virtually every facet of the service will soon be profoundly influenced by the introduction of AI, they observe, not only at the tactical level but systemically: organization, doctrine, policy and operations. The Navy will experience this with no less salience than the transition from sail to steam, from solid shot to exploding shell, or to the submarine and aircraft carrier.

“The rapid rise of digitization and networking signal the beginning of a new era that may, one day, take us beyond the carrier’s primacy,” Denning and Arquilla state. “Indeed, by our reckoning, when that change comes the next capital ship is likely to be virtual: a swarm of platforms, including carriers, plus countless digitally controlled entities - some remotely controlled, others fully autonomous.”

The timing of Denning and Arquilla’s essay is impeccable ... In many ways, that future is already upon us.

In December 2018, Chief of Naval Operations Adm. John Richardson explicitly laid out his strategic vision of a networked fleet in “A Design for Maintaining Maritime Superiority 2.0” (DMMS 2.0), calling for a comprehensive operational architecture to support distributed maritime operations as the service expands its unmanned underwater, surface and air systems.

“There are plenty of examples in history where just the power of networking things together creatively, adaptively, brings actually more power to that force,” Richardson explained during a Heritage Foundation presentation this February. “It makes intuitive sense [...] If you’re able to share data more across the force, you’re able to respond to that awareness with more agility, you can be a more powerful fleet.”

Successfully embracing this sea change means navigating its inherent challenges, according to Denning and Arquilla. While AI opens new horizons for the future of sea power, neural networks are fraught with risks, including reliability, trustworthiness, inscrutability and fragility.

“One of my biggest concerns is that AI has become so hyped that most people don’t understand the limits of the technology and whether it can be trusted in critical situations,” Denning noted. “I am glad that we struck a resonant chord when offering to illuminate this question.”

“Our biggest concern with the technology itself is that it is very good at computing fast without regard to context, but warfighting happens in contexts laden with subtle meanings,” he continued. “Human operators can bring cunning, judgment and wisdom to decisions proposed by machines.”

Automation integration is not an either/or proposition between humans and machines, Denning and Arquilla insist, but human-machine teaming is ultimately the best way forward towards the future of military AI. The key to success, therefore, lies in the Navy’s ability to cultivate the skilled engineers, mathematicians, statisticians and others required to design, build and sustain these sophisticated networks.

“For this reason, we advocate an approach to naval education that emphasizes deep learning in the technologies of computer science, networking, machine learning, sensor data acquisition and analysis, and advanced statistics,” Denning and Arquilla conclude.

The award-winning essay will appear in the June edition of USNI’s “Proceedings” journal.