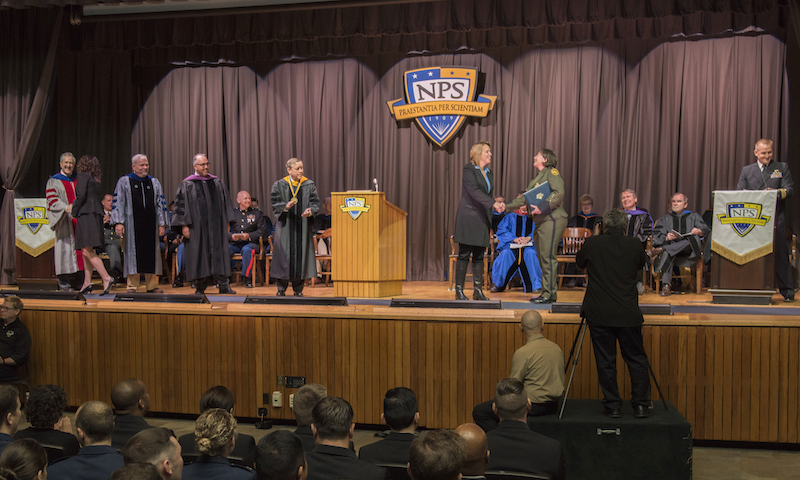 “To our graduates, words cannot express how proud we are of your success,” said Route. “We have immersed you in an extremely competitive academic environment that has enabled you to focus on the challenges that affect your service, our defense capabilities, and national security.”

Route went on to thank the faculty, staff and loved ones that contributed to the students' successes, while also recognizing the NPS Foundation for providing the university with an important “margin of excellence.” He then turned the podium over to commencement speaker, former Chief of the Metropolitan Police Department of the District of Columbia and Chief Security Officer for the National Football League, Ms. Cathy Lanier.

“Given the threats that we face today it is difficult to think of inspirational words, especially for anyone who has chosen to serve and protect their country when it feels like the odds are against us,” Lanier said. She would then go on to remark on an accomplished 27-year career ... a career with plenty of examples of beating the odds.

“I had a real rough start,” she said. “I was raised by a single mom. I dropped out of school in the ninth grade, ran away from home, and had my son when I was 15. I was working as a secretary and a waitress trying to provide a future for my son. You know, a single mom with a ninth-grade education doesn’t get a lot of opportunities, but in 1990, the Metropolitan police department gave me one.”

Starting as a foot patrolman, Lanier quickly flew through the ranks of the Metro DC police department, achieving the rank of sergeant in 1994 and lieutenant in 1996. In 1998, she was promoted captain and, later that year, was promoted to Inspector and placed in charge of the department's Major Narcotics Branch/Gang Crime Unit. By that time, she had received both a bachelor’s and master’s degrees from Johns Hopkins University.

“In 2003, I applied for and was accepted to the Naval Postgraduate School’s Center for Homeland Defense and Security, probably one of the best decisions I have ever made,” Lanier said. “I wasn’t too sure about this place at first. By this point in my career, I had a ton of experience and a reputation for being a tireless, hands-on leader who knew the operational side of policing.

“I come here, and in my first class, I produce what I think is a brilliant, 30-page paper, and [NPS CHDS faculty member] Chris Bellavita looks at me and says, ‘So what?’” Lanier continued. “I was insulted, demoralized, but then I got it, it doesn’t matter how well the paper is researched and what you know ... What really matters is, am I going to make a difference.”

Lanier further described NPS as a place that “forces you to create what doesn’t exist using collaboration and innovation to solve problems, sometimes before anyone even thinks about them.

Just 18 months following her graduation from NPS, Lanier was nominated as Chief of Police by the incoming mayor of Washington, D.C. With only 16 years as a member of the Metropolitan Police Department, she became the first woman to ever hold the position.

“There is no doubt in my mind that NPS has not only opened doors for me, but it has also prepared me for what is on the other side of those doors,” said Lanier. “I am sure it played a role in my selection as the Chief of Police in 2007 and more recently as Chief Security Officer for the National Football League.

“But, it was never more important than it was on September 16, 2013, when Aaron Alexis walked into the NAVSEA Command building 197 at the Washington Navy Yard,” she continued.

As Chief of Police, Lanier led a combined effort of 20 state, local and federal agencies that included more than 117 law enforcement officers in pursuit of Alexis. who by the end committed 12 homicides with two of the officers shot fatally. Though Lanier responded three separate active shooter scenarios during her tenure as Chief of Police none of them were as “complex or as devastating” as her experience at the Navy facility.

“The NPS community provided me with an education, an inspiration to achieve and a continuously growing network of professionals I can rely on to assist with strong, complex issues,” said Lanier. “The same opportunity is now provided to you. Congratulations on your achievement today, and best of luck as you return home to your professions to make a difference.”

While the ceremony continued with the traditional crossing of King Auditorium’s stage by each graduate, the audience was treated to a rare and special occasion when NPS Dean of Students Cmdr. Paul Rasmussen paused to recognize graduate, Army Maj. William Swenson, who was awarded the Medal of Honor in 2013 by former President Barack Obama.

Swenson, who preferred to keep a low profile while completing his studies in the university’s National Security Affairs curriculum, was recognized for acts of gallantry during the Battle of Ganjal, which saw him risking his own life in order to rescue wounded American and Afghan soldiers, becoming the first living officer to receive the Medal of Honor since Vietnam.