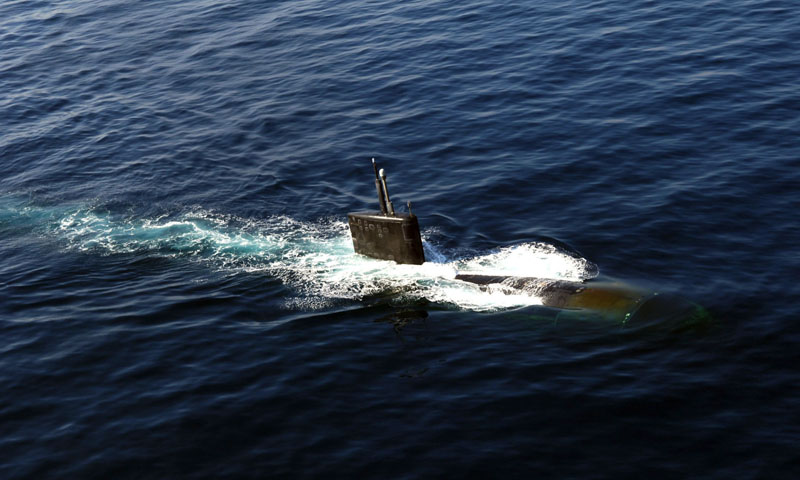 Nuclear trained officers on board the Navy's fleet of submarines, such as the Los Angeles-class fast attack submarine USS Miami (SSN 755) pictured surfacing in the North Arabian Sea, have been given a fast track to an NPS degree. The Naval Postgraduate School (NPS) has partnered with Naval Nuclear Power School to provide asynchronus graduate education, and advanced credits, leading to a Master of Science in Engineering Science (Mechanical Engineering) degree for nuclear trained officers.

The Distance Learning Program for Nuclear Trained Officers utilizes NPS distance learning courses, which when combined with training at the Naval Nuclear Power School, lead to a Master of Science in Engineering Science (Mechanical Engineering) (MSES-ME) degree from NPS.

“The Department of Mechanical and Aerospace Engineering just completed the successful curriculum review of this important asynchronous distance learning program as well as a similar synchronous program that is taught directly to Naval Reactors at the Washington Navy Yard,” said MAE Chair Dr. Garth V. Hobson.

“The department sees these two programs as vital to our contribution to the further education of Nuclear Trained Officers. We continue to develop new courses for this program as well, to ensure that students progress through the program smoothly,” Hobson added.

“To be eligible for the program, officers must have graduated from Naval Nuclear Power School, a rigorous six-month program in Charleston [South Carolina], with the Naval Nuclear Power Training Command, where they learn the principles of electrical, mechanical and nuclear engineering in support of their future leadership roles on nuclear powered vessels,” said Prince.

A former submariner and nuclear officer, Prince works with students around the world as he administers the program from his office at Naval Base Kitsap, where the program was first established at the Navy's Trident Training Facility, Bangor in 2008.

“The program used to be synchronous. Classes were established [at Naval Base Kitsap] because of the high concentration of nuclear-trained officers here,” said Prince.

But as missions changed and forces were realigned, the Navy turned to NPS to help them to develop an asynchronous program, meaning students could complete the online coursework on their own schedules, that would meet the educational needs of Nuclear Trained Officers stationed around the world.

The courses are offered in a series of recorded lectures combined with texts supported by a cadre of NPS professors. Coursework is shipped to students around the world where they are able to work through it at their own pace under a professor's guidance. The average student finishes each of the courses in three to four months.

“We currently have over 50 students worldwide actively enrolled in the program. We offer them a true engineering degree if they are willing to buckle down and complete the coursework and a research paper,” said Prince.

Lt. Cmdr. Jake Kennedy is an MSES-ME student nearing completion of the program. He was able to complete the coursework despite a demanding tour aboard a fast attack nuclear submarine. He credits the program with providing him with in-depth knowledge about the systems that power the Navy's most advanced and lethal vessels.

“The instructors were patient with me and worked with my schedule. They adjusted to the demands of being a submarine officer and took advantage of the natural peaks and lows, more peak than lows, of submarine nuclear officer work,” said Kennedy.

He also notes that the education he gleaned through the MSES-ME program has made him a better nuclear officer at a time when his skills are in high demand.

“Alternating between sea and shore duty, nuclear officer schedules are very tight. The [MSES-ME] program gave me the opportunity to complete the course work I needed.  Without that distance learning format and the program's schedule flexibility, I wouldn't have been able to pursue my degree,” said Kennedy.