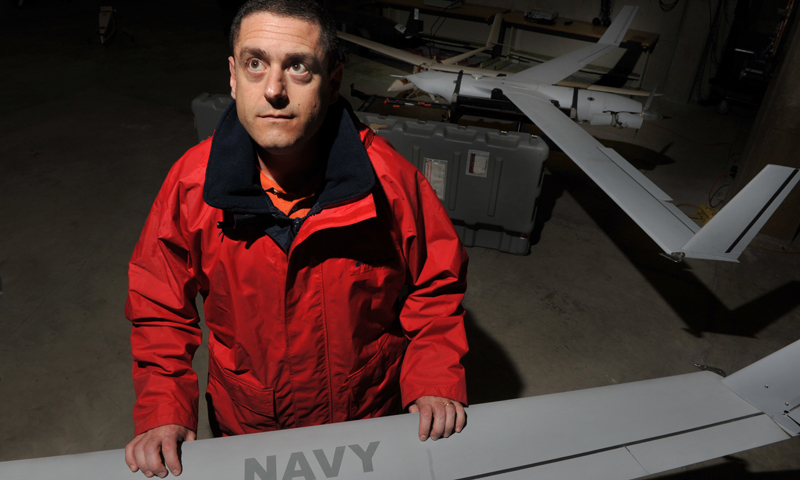 NPS Ph.D. student Cmdr. Jay Foraker recently defended his dissertation in optimal search algorithms for moving targets in continuous time and space – an effort that can be applied beyond the narrow waterway applications he pioneered. Upon graduating this month, Foraker will begin teaching Mathematics at the U.S. Naval Academy.

Cmdr. Jay Foraker is less than a month away from receiving his Ph.D. in Operations Research (OR), but his studies in optimal search patterns may not be coming to a close. In fact, it may soon become part of a much larger Office of Naval Research project with OR faculty and future students continuing the effort.

In his dissertation defense, Aug. 23, Foraker explained the work that went into developing the algorithm, supported by NPS Associate Professor Johannes Royset and Mechanical Engineering Professor Isaac Kaminer, and why the fleet can benefit from similar optimal search systems, particularly in constrained waterways, such as a straight or channel.

“If you are a terrorist cell and you want to take out an aircraft carrier, it’s hard to do that in the open ocean. But when they are in a constrained waterway, the ship can’t conduct fixed wing flight operations, so it’s limited to its escort and a helicopter or two that are doing the patrols. So we said ‘If we want to protect them in that sort of a situation, what would be a way to look at the problem?’”

Like a car traveling along a highway, Foraker explained, the ships are on a set path through a narrow waterway, with little room to deviate from the path. If the adversaries know the ship’s path, they can easily attack. In order to protect the ship and crew, search helicopters or cruisers can use time and distance factors to determine an optimal search pattern to seek out threats.

“You choose your metrics and run the software that we developed as a part of this research, and it tells you the output of that path,” explained Foraker. “And that’s the path that – if the bad guy does his thing, and the carrier does its thing – the helicopter pilot can fly the path that, mathematically speaking at least based on the setup and based on the model, [is] the best path you could follow to find the bad guy.”

Foraker designed a model that was flexible enough to be applied to a number of scenarios. Factors and scenarios can be modified to produce the necessary results. Royset has been working on this research project for some time, and is working on publishing a paper on the topic of optimal search for moving targets in continuous time and space.

While his research has a direct link to a problem facing the Navy, it could also be applied to other maritime problems, such as piracy, and land-based convoy operations. The general time and distance data methods can be applied to a number of different scenarios.

Foraker noted that his research was possible, in part because of the support he received from NPS faculty. He acknowledged the quality education he received in his previous graduate studies at Georgia Tech, but noted that the military has exceptional research needs that a traditional civilian institution might not be as focused on.

“NPS also understands the time crunch,” he added. “In academia, it’s done when it’s done. You hear about grad students going on for years. But here, they were very sensitive and understood the needs of the Navy, which was to get me in at this date, and produce me at the end on this date.”

And for Cmdr. Foraker, that date has finally arrived. He will be graduating this month, and going on to teach Mathematics at the U.S. Naval Academy at Annapolis. He hopes to help prepare future Naval leaders for the complexities facing the warfighter, and the country.

“The world is complex, and continues to be more complex. There are a lot of threats. Machines are great and technology is great, but fundamentally, people have to make decisions,” Foraker explained. “I think it behooves us as a nation to educate the officer corps … and imbue them with as much ability as possible to think and understand the tools that are out there.”