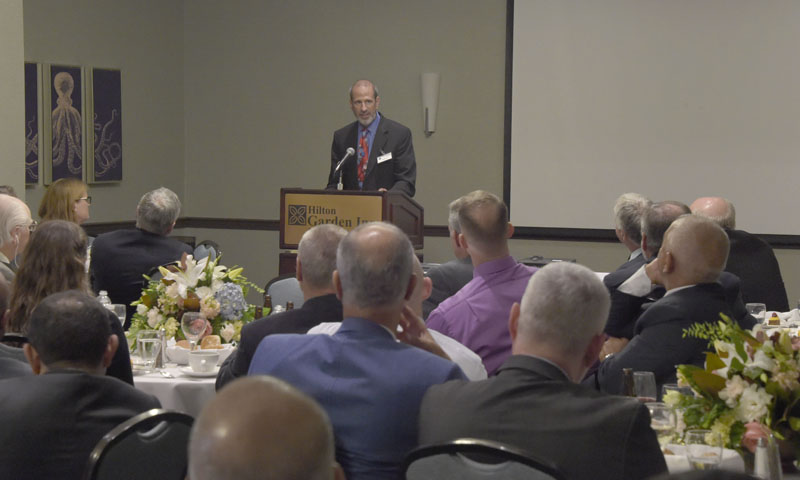 Under Secretary of Defense (Comptroller) and Chief Financial Officer, the Honorable Mike McCord, addresses attendees during the Defense Resources Management Institute (DRMI) 50th Anniversary Celebration at the Hilton Garden Inn, Aug. 4. Since 1965, DRMI has taught more than 35,000 professionals from over 160 countries.

The Defense Resources Management Institute (DRMI) at the Naval Postgraduate School (NPS) in Monterey, Calif., is celebrating 50 years of educating defense leaders with an eye toward creating sound fiscal policy and the efficient allocation of precious defense resources.

DRMI’s mission can perhaps be best summed up in the words of former British Prime Minister Winston Churchill who said, “Gentlemen, we have run out of money. Now we have to think.”

Since its first course in 1965, DRMI has educated 34,841 U.S. students and 20,258 international students from 171 different nations. DRMI graduates include prominent world leaders like His Majesty King Abdullah of Jordan, ministers of defense, ambassadors, and other dignitaries from around the globe.

“Our goal is to develop a broad-based analytical framework for defense decision makers emphasizing the economic and efficient allocation of defense resources, and to provide an environment for the comparative exchange of ideas related to the management of national security,” said DRMI Director Dr. Natalie Webb.

Under Secretary of Defense (Comptroller) and Chief Financial Officer, the Honorable Mike McCord recently weighed in on DRMI’s continued contributions toward the education of DOD policy makers during a celebration honoring DRMI’s 50th anniversary.

“Many things have changed over the last 50 years, from the cold war to a man walking on the moon and the fall of the Berlin Wall. For DRMI to stay relevant over this period of incredible change is a remarkable testament,” he said.

The Navy Management Systems Center, which eventually became DRMI, was established in 1963 by then Secretary of Defense Robert McNamara. Before he became the leader of DOD, McNamara was the CEO of the Ford Motor Company, and he attempted to apply some of the private sector economic principles that led to his successes at Ford to the DOD.

“McNamara installed the Planning, Programming and Budgeting System [PPBS], which is still in use today. It requires good economic analysis, because the main problem in defense economics is the allocation of scarce resources among many competing interests under conditions of uncertainty,” explained NPS Professor Emeritus, Dr. James Blandin.

Blandin, whose father was one of DRMI’s founders, taught at NPS for 34 years. He notes that McNamara’s push to implement the PPBS system was frustrated by a lack of people qualified to use it. As a result, McNamara directed the founding of a center that could be used to develop people with the skills necessary to realize his vision. The decision to stand-up that center at NPS was driven by recognition of the NPS faculty’s experience in defense-focused graduate education.

Later, during President Lyndon Johnson’s administration, a PPBS system similar to the one used by the DOD was enacted throughout the federal government, and civilians began to join DOD professionals at NPS to receive the education necessary to ensure its success.

DRMI rose to McNamara’s challenge and remains true to its core mission.

Like the university itself, however, DRMI has also extended its faculty expertise to our international partners by providing resource management courses to allied defense professionals from around the world. 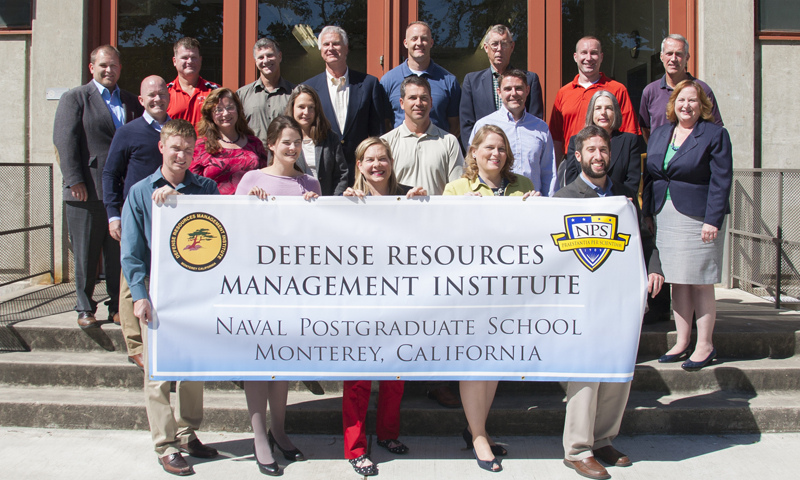 Faculty from the Naval Postgraduate School’s Defense Resources Management Institute (DRMI) gather for a group photo in front of the institute’s spaces in Halligan Hall. DRMI celebrates its 50th anniversary in 2015, established in 1965 by then Secretary of Defense Robert McNamara.

“[DRMI’s] international participation has been invaluable to the U.S. It creates a linkage between the U.S. and other nations, and we have had some illustrious people come through and go on to do some pretty amazing things … Over the years, we have received a tremendous value for the dollar that we spend [at DRMI],” said McCord.

In 1970, NPS offered its first Senior International Defense Management Course, or SIDMC. SIDMCs are comprised of senior defense leaders from around the world who gather to listen to a variety of subject matter experts, NPS faculty, and each other for four weeks at NPS. SIDMC students also participate in an exercise designed to test their ability to allocate resources amongst competing interests.

“If we're successful, the participants will think about their national security at a strategic level, and gain a new perspective and additional tools for managing their organization's resources to respond to contemporary security challenges,” said Associate Professor Eva Regnier.

Assistant Minister for Plans, Policy and Operations Victoria K. Sawyer with the Liberian Ministry of Defense is a SIDMC graduate.

“This sort of international cooperation helps to change minds and creates greater understanding,” said Sawyer. “Strategic planning, value for cost thinking, decision making, and most importantly, accountability and transparency … That is what my country needs most.

SIDMC successes at DRMI led to the creation of the International Defense Management Course (IDMC) in 1971. Like the SIDMC, the IDMC aims to arm students from allied nations with resource management and other fiscal planning tools, but it is geared toward mid-level officers and defense civilians.

When the Soviet Union fell in 1991, demand for DRMI expertise increased further. Former Soviet republics began to turn to the U.S. for assistance as they developed new economic policies within their respective defense ministries and departments.

“Countries that had previously been in the orbit of the Soviet Union became new democratic states. When countries in the Balkans, Poland, Hungary and Slovakia gained independence they looked to the U.S. to help them with their educational programs, and DRMI was called upon,” said Blandin.

And while DRMI has been offering courses to international students from nearly day one, on the heels of its successes among the former Soviet Republics, it increased its mobile course offerings bringing the DRMI and NPS expertise to more than 70 different nations worldwide. DRMI International Programs Coordinator Al Polley believes there are several benefits to brining DRMI courses to allied nations.

“Teaching abroad is efficient. We can teach 30-40 people for what it would cost to teach only three people attending a resident course at NPS. When teaching overseas, we also benefit from our ability to use local interpreters to overcome language barriers and are able to tailor our courses to issues relevant to our host nation,” said Polley.

As McCord, and other defense leaders spanning five decades, can attest, DRMI has made a lasting contribution to the DOD’s ability to allocate and manage defense resources and has helped to shape the defense departments and ministries of allied nations around the world.