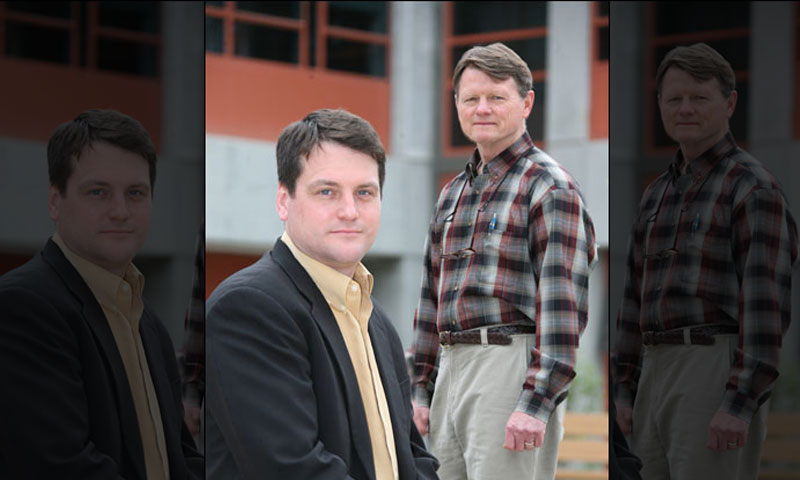 Capping more than eight years as Chairman of the Naval Postgraduate School Department of Operations Research (OR), Prof. Jim Eagle has passed the leadership baton to Prof. Rob Dell. Dell’s appointment was at the recommendation of the Department and approved by Graduate School of Operational and Information Sciences Dean Peter Purdue, himself a former OR Dept. chair.

Capping more than eight years as Chairman of the Naval Postgraduate School Department of Operations Research (OR), Prof. Jim Eagle has passed the leadership baton to Prof. Rob Dell.

Dell’s appointment was at the recommendation of the Department and approved by Graduate School of Operational and Information Sciences Dean Peter Purdue, himself a former OR Dept. chair.

“It’s been an honor and a pleasure to serve as chairman of a great OR Department at this great School,” Eagle said. “Chairmanship terms usually come in three-year increments, so my eight and a quarter years is definitely on the high end,” he noted. “As the end of the six years approached, Rob was planning his first sabbatical, so the dean, with the recommendation of an OR faculty committee, asked me to stay on for another two years, and I agreed.”

“Both NPS and the department have been extremely fortunate to have Jim as chairman, especially for so long and distinguished a tenure,” Dell noted.

Eagle's chairmanship, which began in Oct. 2000, saw the celebration of the Department’s 50th anniversary, in August 2001, and numerous academic and administrative advances.

“There have been many departmental accomplishments over the past eight years,” Eagle recalled. “I didn’t ‘do’ any of them, of course, but I’m proud that they happened on my watch. Among the department’s accomplishments have been a doubling of the annual number of OR students in residence between 2001 and 2009, with Operations Analysis becoming the second largest resident curriculum; creation of a new Master of Systems Analysis distance learning (DL) curriculum, now the third largest NPS DL program; creation of the nation’s first master’s degree curriculum in Human Systems Integration; continued growth in the department’s defense-relevant reimbursable research programs; and -- very importantly -- the hiring of twelve new tenure track faculty members.

“Faculty search and hiring is a long process, much like a courtship, and is one of the most important things a chairman does because it’s the single most vital part of having a vibrant academic department,” Eagle stressed. “So when you succeed in bringing outstanding teaching and research talent on board, it’s cause for celebration.”

“A major highlight of the past eight years has been maintaining the Department’s high national ranking, including the election of three OR faculty to lifetime membership in the National Academy of
Engineering (NAE), the highest professional distinction an engineer can receive in the U.S.,” Eagle noted. The three faculty members are Distinguished Professors Gerald, Brown, Donald Gaver and Alan Washburn.

“As Chairman, you get to be your department’s greatest cheerleader,” Dell noted, “and Jim really put his all into that. In addition to the new faculty hires, he put a tremendous effort into getting well-deserved teaching and research recognition for our faculty and staff.”

“I’m delighted to have Rob Dell, with his extensive background in research and analysis, taking over for Jim Eagle, who’s done a heroic job making the NPS Operations Research Department one of the top in the country,” Purdue said. “We all want to thank Jim for doing such a great job. The Department is as strong as it’s ever been because of his excellent decisions over the past eight years, and I have every confidence that Rob will continue to
build on the solid foundation he’s inherited from Jim.”

“I’m honored and humbled to have been selected by my faculty and dean to serve in this new role,” said Dell, who joined the Department as an assistant professor in 1990. “I love this Department and its wonderful faculty and students, who’ve been in such able hands these past eight years, and it’s a great honor to inherit that legacy and be able to move it forward.”

Looking to the future, Dell said his goals for the Department include growing the number of tenure track faculty to keep pace with the increasing number of students and research funding, and continuing to build the Ph.D. program in alignment with the vision of Provost and Executive Vice President Leonard Ferrari to expand the number of military and civilian doctoral students throughout the university.

“We’re always seeking to hire excellent faculty and do whatever it takes to ensure that they succeed and receive the recognition they deserve,” Dell said. “We also benefit greatly from our military faculty -- of which OR has more than any other NPS department – who provide operational experience and expertise that is an essential part of our instruction and research.”

The first formal military operations research organization in the U.S. was established in 1942 by the Navy, which relied on its analysis throughout World War II. In 1950, the Chief of Naval Operations directed the creation of the first U.S. Operations Research program of study, which began in Aug. 1951 with a class of nine students at the Naval Postgraduate School, then at its original home at the U.S. Naval Academy in Annapolis. The first OR degrees were awarded in 1953, with the curriculum offered continuously through NPS’ move to Monterey in 1951. As of its 50th anniversary in 2001, the Department boasted over 3,300 graduates from all the U.S. military services and 31 nations. Today the number of OR Department graduates exceeds 3,900.