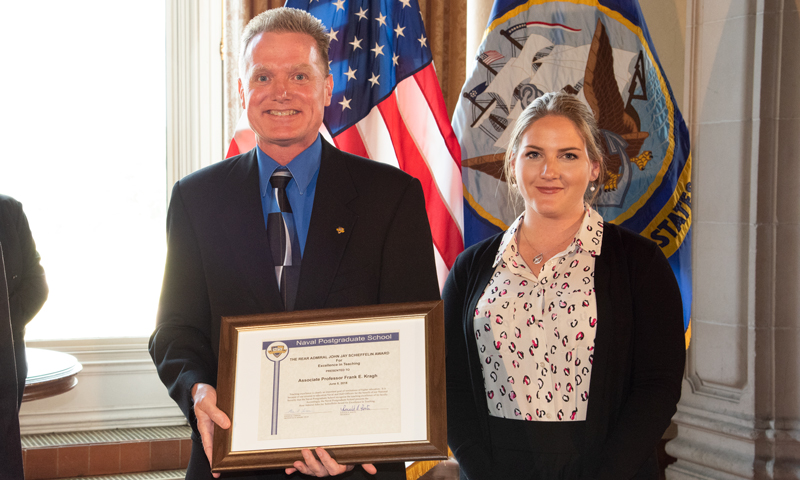 The Rear Adm. John J. Schieffelin Award for Excellence in Teaching at the Naval Postgraduate School was awarded to Dr. Frank Kragh, Associate Professor in the Department of Electrical and Computer Engineering.

“I was very pleased and surprised ... There are a lot of faculty members here so the odds aren’t very high,” Kragh said. “And for a professor with smaller class sizes to be considered for the award is just really nice.

“When you are a professor, you go into a classroom and you don’t take any of your management with you. Obviously, there are performance reviews and things like that, but it’s mainly students that you have the most interaction with,” he continued. “It means a lot to me to get this type of recognition from the students because it means that they feel like I am doing a great job and their opinion matters the most to me.”

Kragh has an extensive engineering background that predates his time here as a professor. As a prior instructor at the Naval Nuclear Power School for four years, he helped shape the Navy’s engineering future by imparting his knowledge to all of the Sailors who came through his classroom.

He got his first taste of NPS when he came here as a military instructor for the Department of Electrical and Computer Engineering in 1990. After his four-year stint at NPS, Kragh decided to take the next step in his education by becoming a research assistant and working toward his Ph.D. in the same department he had spent the last four years teaching in.

After receiving his doctorate from NPS, Kragh spent several years putting his knowledge to work for the Space and Naval Warfare Systems Command (SPAWAR) in San Diego. Kragh once again found an opportunity to come back to NPS in 2003, something he had always wanted to achieve.

“I came back to the Naval Postgraduate School because I really enjoy teaching military students ... They are all very motivated and have a real need and desire for the education,” Kragh said. “I didn’t get my Ph.D. and immediately start looking to teach at a university. I only applied once I found out about an open position here because it has the military mission that is the important ingredient.”

Sponsored by the NPS Foundation, the annual Schieffelin Award recipient is determined by ballot information supplied by current students and recent alumni, along with a performance history processed through a series of objective computer programs which eliminate bias and award merit rankings to eligible candidates. The Schieffelin Award committee, comprised of appointed faculty members, evaluates the results of the balloting and selects a final winner.

The award will be officially presented to Kragh by NPS President retired Vice Adm. Ronald A. Route at the Spring Quarter Graduation Commencement Ceremony, June 15, 2018.