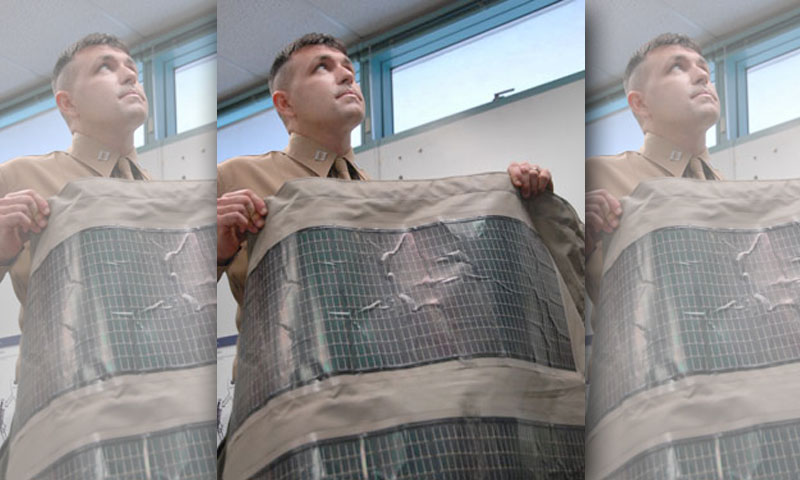 For Marine Corps Capt. Brandon Newell, the issue of alternative energy has long been one of concern. Even before the Department of Defense (DoD) recently began to prioritize alternative energy and energy conservation, Newell began searching for a scarce network of experts with similar concerns. When he started out in 1996 as an Electrical Engineering student pursuing his bachelor’s degree at Louisiana State University, Newell was disappointed at the availability of curriculum relevant to solar engineering, something he became interested in as far back as childhood.

Upon arriving at NPS to pursue his Master’s in Electrical Engineering in 2008, Newell decided to go in a direction that was seemingly uncharted territory within the military at that time. He focused his thesis on alternative energy and meeting the demand for the warfighter overseas. Following the devastating earthquake in Haiti on January 12, 2010, Newell found his research and understanding of alternative energy tested. He traveled to the island as part of the NPS Hastily Formed Network (HFN) team to deliver emergency communications equipment. Newell prepared for the trip by running a software program called HOMER to determine the availability of certain alternative energy capabilities.

The HOMER Micropower Optimization software, which Newell researched extensively for his thesis, provides the user with optimal power solutions based on set data input by the user on conditions and determining factors in a given area. Because the military operates in different conditions around the world, Newell was interested in capabilities that could identify the most efficient alternative energies to get the job done in each kind of environment.

It is critical that the DoD establish alternatives to costly fuel for many reasons. The physical dangers to the troops and convoys transporting fuel in combat zones is one area of particular importance. Reducing the amount of consumable resources being used, and relying more on natural alternatives such as wind and solar energy would ease the transportation burden, and also keep the troops from spending more time than necessary in harm’s way.

In an extensive report titled “DoD’s Energy Challenge as Strategic Opportunity,” Rocky Mountain Institute Founder Amory Lovins explains how critical it is for the military to establish safer alternatives to meet the energy needs of the troops. Lovins explored the high price of fuel and energy in terms of costs in “blood and treasure,” an expression regularly used to describe the wider implications of relying on cumbersome fuel supplies and stationary electrical grids.

Lovins is one of the foremost experts on energy conservation and efficiency, and has worked closely with engineers and military leaders to develop reasonable solutions to the growing energy demands. Newell and Lovins share a common concern for the energy and an interest in the direction that the DoD will take in the future.

Newell fully understands the importance of having reliable equipment that can support the needs in critical circumstances, as he saw in Haiti. Prior to that trip, Newell sought out an internship with the National Renewable Energy Lab (NREL) and worked as their first ever active duty military intern. His six week internship opened many doors for him, including one that would take him to the Marine Corps Energy Summit, where top Marine leaders met to outline the goals for the future.

Newell noted that the incredible strides made in energy awareness within the DoD really began to take shape at the Summit when Marine Corps. Commandant Gen. James T. Conway expressed that expeditionary energy was a new area of focus for the Marine Corps Conway assembled a team called the Marine Energy Assessment Team (MEAT), with the purpose of visiting the Marine Area of Responsibility (AOR) in Helmand Province, Afghanistan to investigate the fuel, water and electricity usage. Newell was a member of that team, and spent three weeks last September doing just that.

Upon returning from the MEAT trip, Newell and his team briefed the Commandant on their findings. In response to a need for continued focus on deployable resources, Conway created the Marine Expeditionary Energy Office, which is where Newell will be stationed following his graduation from NPS in September. The office is responsible for establishing ways to meet the energy needs of the troops in the most efficient manner possible.

“The Marines are trying to undergo a cultural shift in how we view energy. One way to do that is by creating metrics that truly evaluate the power demand impact of new technologies being introduced into the Corps,” explained Newell. “So if you have programs that are power intensive, we didn’t have a way to properly evaluate whether it was worth the cost. The other part of that shift is in behavior. It’s about making deployed Marines aware that energy is a costly commodity in blood and treasure. Whether it’s the amount of air conditioning we use or just our everyday habits. So we are trying to make behavioral changes in addition to equipment changes.”

Those changes have finally begun to catch on across the services, and Newell sees only more promising things on the horizon. Most recently a powerful partnership was formed to ensure the most energy-conscious minds in the government are working together towards a common goal.

On July 27 at the White House Forum on Energy Security, it was announced that the Department of Defense (DoD) and the Department of Energy (DoE) would be signing a Memorandum of Understanding (MOU) in support of a joint mission to secure the safety of troops overseas, and to continue to explore efficient use of resources throughout the services, including the use of renewable energy, alternative fuels, water efficiency and deployable power supplies, to name a few.

“It is not enough for the Marine Corps to purchase alternative energy systems such as solar panels and wind turbines,” noted Newell in his thesis project. “The Marine Corps must provide commanders with the tools necessary to maximize the potential of these resources.  If alternative power sources are used incorrectly or inefficiently – such as by employing them in locations where the solar and/or wind resources are poor – Marines will lose confidence in the capability of these power sources and will return to the fossil fuel-driven generators because of their consistent production.” 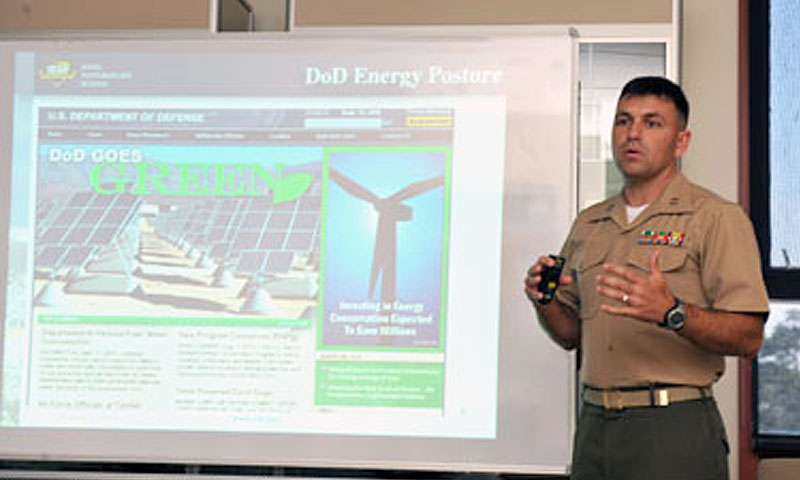 “The Department of Energy and the Department of Defense’s shared vision of a safe, secure energy future has provided us with a strong foundation to work together on energy issues,” said Poneman. “Working together, we can speed the transition to a clean energy economy, while helping protect our troops. Building a new energy future is the right thing to do to strengthen our national security, to promote economic prosperity, and to improve our environment. It is also the right thing to do for our men and women in uniform.”

For Newell, the MOU symbolizes more than just the partnership. It represents all of the progress being made in establishing safer, more reliable resources for the troops.

“The DoE has the resident knowledge,” explained Newell. “My internship and my networking have really given me a greater understanding that these issues are not new. While they are new talking points, there are people who have been working in these arenas for a long time. And it’s those experts that we need to rely heavily upon. We don’t want to reinvent the wheel. So that relationship with the DoE is critical.”

Newell’s understanding of the expeditionary energy needs of the services will be invaluable as he leaves NPS and takes his education to the Marine Corps Expeditionary Energy Office at the Pentagon. As he prepares to leave NPS, Newell shared his insight with the NPS community as a speaker in the Brown Bag Lecture Series hosted by the Cebrowski Institute on Sept 14. He touched on the energy research opportunities at NPS, highlighting a field of growing importance within the DoD, and an area he sees becoming even more prevalent in the future. Newell’s impact on the Marine Corps and the NPS community has been widespread, earning him the Cebrowski Institute Award for Innovation for his role as a leader in alternative energy awareness within the DoD. As his career progresses and his persistence grows, there is no question that Newell will continue to help lay the foundation for safer, more efficient resources throughout the military.