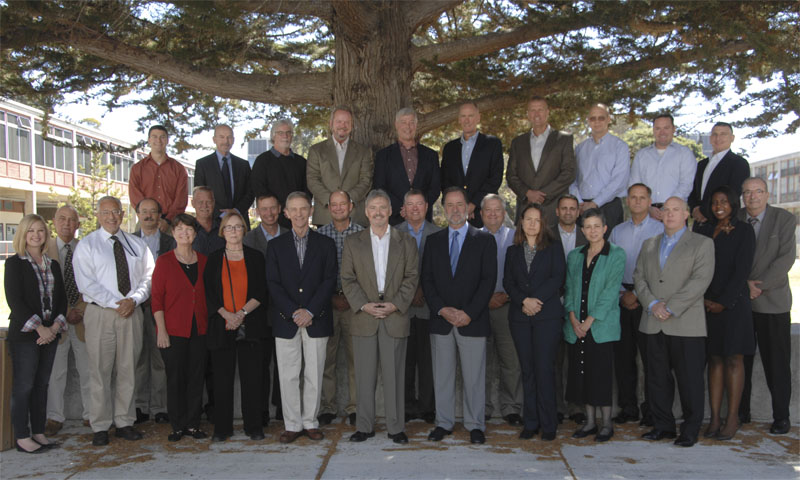 Attendees and presenters participating in the Naval Postgraduate School’s latest Energy Executive Education program gather for a group photo on the university campus, Sept. 25. The weeklong seminar provides a diverse group of Navy and Marine Corps leaders with an extensive educational program in how to ignite cultural change in energy utilization across the services.

Mabus recognized long ago that energy was creating an operational vulnerability, and outlined several efficiency goals to reduce fleet-wide energy dependence. A key component of his effort was the implementation of sweeping cultural change throughout the services, where energy is a part of every consideration and decision.

The primary goal of the Energy Executive Education forum, the second rendition of what officials hope is a continued periodic offering, was to demonstrate how leaders can begin to affect their chains of command in this critical capacity.

“Presence is what we are all about. When there was an earthquake in Haiti, a tsunami in Sendai or a fighter needed in Afghanistan, we were there,” said Mabus in a recorded message to the attendees.

“Being there requires the right people in the right place at the right time … Without the energy to feed our platforms, we might not be there when it matters,” he continued.  “We need forward thinkers during this transformation forward …  We need your leadership and innovative thinking to meet this challenge.”

“We are trying to expand the sphere of influence around energy,” said Dr. Neal Thornberry during one presentation, a member of NPS’ Center for Executive Education and an expert on driving innovation.

Expanding that sphere of influence means changing the way military and civilian leaders from within the Department of Defense (DOD) think, exposing them to some of the nation’s best minds in the areas of conservation, alternative energy and efficiency engineering.

While conservation was at the forefront of the seminar organizers’ minds, the presentations were not about environmental advocacy.

“Our focus is on the warfighter, a $1 increase in the price of oil equates to a $30 million cost to the Navy … that money has to come from somewhere, and it generally comes from education and training,” said Sue Higgins, Deputy Director of the Cebrowski Institute.

Much of what Mabus, and NPS experts are trying to accomplish is a shift in the manner in which Sailors think about energy consumption.

“It's a cultural change that is happening on the deck plates … Being locked into things because that’s the way they have always been done is not a rationale, it’s an excuse,” said Mabus.

Force Master Chief Ken Daniels with Commander, Naval Air Force Atlantic agrees. He insists that it is from those deck plates that real change will come.

“I believe our answers are down at the deck plate level, I know they are,” said Daniels. “We need to look at the guys and gals down there and figure out how to do things better … they are smart, very smart and they may have the answers already.”

Mabus pointed out in his address, “breaking our addiction to oil” has been a long-standing national security goal for both democratic and republican presidents for more than 30 years. And he was not the only seminar contributor to approach the energy discussion with passion.

“Why am I so passionate about this energy business? Because I remember that time off the coast of Kosovo when every couple of days we’d have to leave the Adriatic to go out to the Mediterranean to refuel,” said Deputy Chief of Naval Operations for Fleet Readiness (N4), Vice Adm. Phil Cullom. “We would be off-stage for 12-16 hours, and were useless … Changing behavior and changing culture is the easiest way to get this done.”

Cullom is one of the Navy’s leading energy thinkers and has been working to change the Navy’s culture of energy usage for over a decade. He was one of several prominent energy-use thinkers, both uniformed and civilian, to present at the Energy Executive Education Seminar over both editions of the course.

Participants acknowledged that in order for these goals to become operational, combatant commanders must be able to operate with confidence while using alternative energies.

“I’m in the projected power and lethality at the tip of the spear business … If it gets me reach and increased loiter time on station, then I will care,” said U.S. Marine Corps Expeditionary Energy Office Director Jim Caley, one of the participants during the inaugural session.

Also presenting at both seminars was Rocky Mountain Institute Chief Scientist Dr. Amory Lovins. Lovins is widely recognized as an energy efficiency guru, and was named one of Time magazine’s 100 most influential people in 2009. He was also responsible for the energy retrofits of the Ford and Wal-Mart headquarters buildings and the Empire Sate building.

Lovins’ new book, “Re-inventing Fire: Bold Business Solutions for the New Energy Era,” advocates a radical shift from fossil fuels to renewable energy, which he says can be achieved as early as 2050.

“We need a new fire,” said Lovins, “Fossil Fuels built our civilization, but today their consequences outweigh their benefits.”

Lovins described the nation’s present energy infrastructure as, “aging, inefficient and insecure.” He called for a series of integrated solutions that include everything from solar panels and electric cars to composite materials that will make vehicles lighter and more efficient.

Lovins is clearly an environmentalist – he drives an electric car and lives in an energy-efficient home in the Rocky Mountains where he grows bananas in the dead of winter. But he also understands the vulnerability oil consumption creates in the service.

“Getting us off oil would be the biggest win we have ever had in military history,” said Lovins. “We need to get off oil, so that we do not have to fight over oil.

“The innovations that you make in the military can lead to change in the civilian sector,” continued Lovins. “This is a future that we can make happen, you can make it happen a lot faster.”

Another notable energy thinker in attendance during the courses inaugural session in July was retired Rear Adm. Len Hering. Hering is the executive director of the California Center for Stable Energy.

“The models for the past are not sustainable in the future,” said Hering. “Climate change is the biggest long-term security threat in the pacific region,” he continued, citing Commander of the U.S. Pacific Command Adm. Samuel J. Locklear.

As a former naval officer, Hering attempted to put the effects of current energy policy into geopolitical terms. He discussed the potential to lose, “whole nations in Oceania” and the potential of up to a billion environmental refugees if policies and practices do not change.

“The choices we make today will determine how the sea levels will rise this century, how fast it occurs and how much time we have to protect our communities,” said Hering.

Much of Hering’s environmental work is focused on “the water energy nexus” wherein according to Hering, 1/5 of the nation’s energy is used to move potable water, a large portion of which goes down the drain without ever being used.

In an effort to address the water energy nexus, Hering championed a process he calls, “smartscaping” an environmentally-sound method of landscaping that Hering claims saved the city of San Diego $30 million.

Hering also described how he was able to take advantage of a federal law that allows savings incurred through conservation to be utilized to fund further conservation efforts.

With the daunting challenge of creating service-wide cultural change, ultimately, time will be the greatest enemy of Mabus’ energy efficiency goals. But with efforts like the Energy Executive Education Seminar continuing, NPS is showing today’s sea service leadership how to rethink forward power projection.