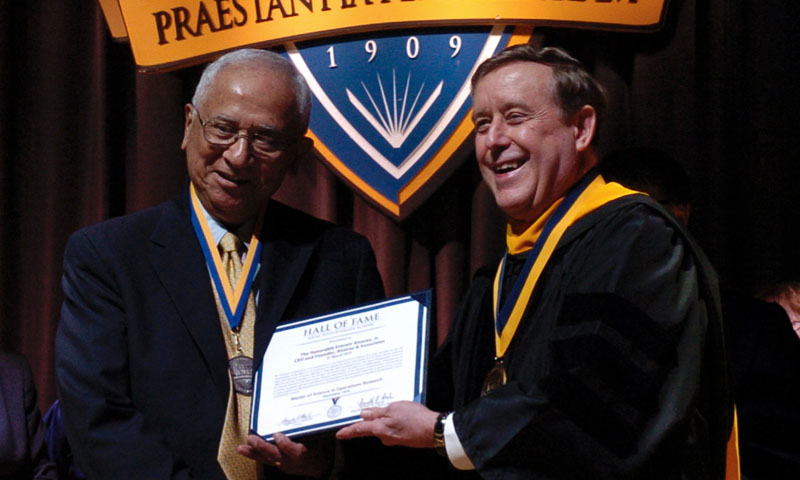 NPS alumnus retired Cmdr. Everett Alvarez Jr., the first aviator shot down during the Vietnam War and the longest held POW in North Vietnam, is inducted into the NPS Hall of Fame by university President retired Vice Adm. Ronald A. Route during the Winter Quarter Commencement Ceremony in King Auditorium, March 27. Alvarez delivered the congratulatory address to some 334 graduates from 17 countries.

“The skills you have developed here will help you serve more effectively wherever you are called, and our nation will count on you as strategic influencers, problem solvers and leaders, wherever your career takes you,” said Route.

In addition to recognizing NPS’ latest graduating class, Route was able to welcome guest speaker and NPS alumnus retired Cmdr. Everett Alvarez Jr. and induct him into the NPS Hall of Fame.

“The Hall of Fame recognizes the accomplishments of NPS' most distinguished alumni and friends who, through the attainment of positions at the highest levels of public service, have made the greatest contributions to society, their nations and to the Naval Postgraduate School,” explained Route.

Alvarez was the first Navy aviator shot down during the Vietnam War and the longest held POW in North Vietnam.

“He represents the epitome of our Navy’s core values: Honor, Courage and Commitment. He exemplifies devotion to his country and dedication to education,” Route stressed.

NPS was Alvarez’s first assignment after his release from captivity. He was welcomed back to the institution, and the region, by members of the Everett Alvarez High School color guard.

"First of all, I’m overwhelmed. Seeing the color guard from the high school that was named after me makes me feel very proud,” said Alvarez.

Alvarez was raised in the Salinas Valley. His parents immigrated to the area from their native Mexico.

“[NPS] has always been recognized as a world-class institution with a world-class faculty, but for me it was also home,” said Alvarez. “Having grown up in this area, I remember my parents and grandparents pointing out these buildings, especially the Hotel Del Monte and saying, ‘If you work hard, study hard, and get rich, someday you can stay there’ … and here I am.”

Also present was a graduate with an interesting connection to Alvarez. Graduating NPS student Francisco Gutierrez-Villarreal, graduated from Everett Alvarez High School and he too is the son of Mexican immigrants. He joined NPS in the summer of 2012 through the Hartnell College/NPS internship program, where he, like Alvarez studied in the NPS Department of Operations Research.

Throughout Alvarez’s commencement address, he drew upon lessons learned from mentors and friends like famed Rear Adm. James Stockdale and former Mississippi Congressmen Sonny Montgomery, for which the Montgomery G.I. Bill was named. He also spoke about the importance of character and challenged the assembled students to be leaders.

“A manager tells you what you are supposed to do, a leader inspires you to do it,” explained Alvarez. “Have you ever heard anyone say, ‘take me to your manager? No, it’s take me to your leader. My experience tells me that leadership is really all about character.”

Alvarez also noted the important work that many of the assembled graduates may be called upon to do in the future.

“The work you are doing may be critical and is absolutely vital to the security of this country. You will be called upon to lead, and you will be given opportunities to draw upon the skills that you have sharpened here,” said Alvarez.

Alvarez is well known for the years he endured as a resident of the Hanoi Hilton and other Vietnamese POW camps, but he has been highly applauded for his post-military career as well.

After retiring from military service, Alvarez went on to pursue further advanced education before becoming a lawyer, author, entrepreneur and executive. Notably, he severed as the Deputy Director of the Peace Corps, Deputy Administrator of the Veterans Administration, and the Chairmen of the CARES Commission. He also founded the consulting firm Alvarez and Associates in 2004.

Alvarez’s books, “Chained Eagle” and “Code of Conduct” detail both his life in captivity and the story of how he rebuilt himself after earning the unenviable distinction of being the longest-held U.S. captive in North Vietnam.

He is the 20th member of NPS prestigious Hall of Fame.