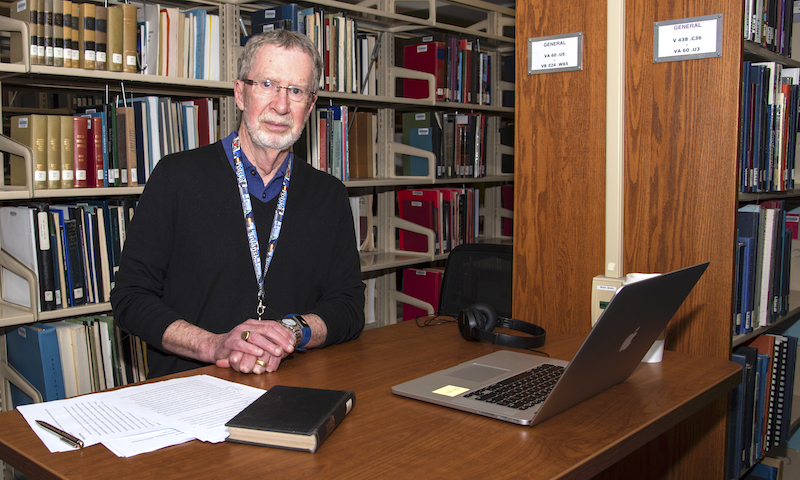 Retired Senior Lecturer George Lober has the rare distinction of having an NPS lecture series named in his honor thanks to the Defense Analysis department’s new George W. Lober Ethics Lecture Series. Lober retired in 2018, but retained his connection to the university’s students through his service as a writing coach in the Graduate Writing Center.

Lober retired in 2018 after 21 years serving as a senior lecturer, teaching technical writing and ethical decision-making. He won the annual Schieffelin Award in 2006, which recognizes the best in teaching at the university.

“Having this lecture series named for me is an extremely high honor,” said Lober. “These types of honors are career honors. But my personal honor is when I get an email from a student telling me that I’ve contributed something to their life. Personally, I think just knowing that I’ve had some positive influence on my students is the highest honor a teacher can receive.”

Dr. Bradley Strawser and DA department chair Dr. John Arquilla generated the vision for this lecture series and aim to make it a campus-wide event and a staple at NPS for years to come.

“He’s a master teacher,” said Strawser. “I’ve always looked up to him as a mentor, a friend and a model of what a good teacher should be. When he retired last year, we thought there was no better way to honor him than naming a lecture series after him, for he was the guy who brought ethics to our department.

“The plan is to offer this series every winter quarter,” continued Strawser. “In the spring, we plan to poll the DA students to see whose work in the ethics field is relevant to them and have that be our system of nominating who the lecturer will be for that year.”

Since ethics touches everybody’s life in one way or another, Strawser added, the series will be open to the entire campus so that everyone at NPS may gain from the experts that will speak.

“I’d like to see it grow to an event where it would actually address some of the ethical concerns that the students here have,” said Lober. “In my experience, students want a venue where they could actually think about some of the ethical issues that they are confronted with in their careers and engage in some sort of conversation that would help them work through some of these issues. So, I hope the series grows to be something that people look forward to and come away enlightened.”