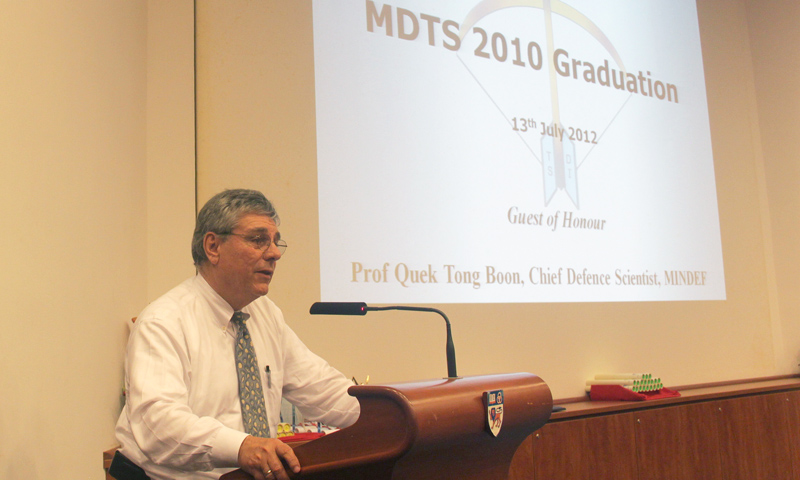 “I cannot emphasize enough how the U.S. Department of Defense, and in particular the U.S. Navy, values its partnership with the Nation of Singapore and the Singapore Ministry of Defense,” noted Ferrari in his address to TDSI graduates. “In particular, the relationship between the Naval Postgraduate School and the National University of Singapore is seen by all as one of the cornerstones of an enduring international relationship that continues to support our own national securities and a growing collaboration on the broader and more complex, global security issues of our time.”

TDSI is a strategic alliance between NUS and NPS that was established in July 2001 to provide a platform that brings together military members and defense technologists in an education and research environment. The partnership, rooted in systems engineering, has grown to encompass a variety of defense-related topics.

“What may have started with a focus on systems engineering more than ten years ago, has moved forward to include joint education and research in many new areas including cybersecurity, maritime security, undersea warfare, electro-optics and operations research,” said Ferrari, noting the progression of the partnership between the intuitions. “I believe we are just at the beginning of a new era in our relationship.”

TDSI’s goal is to produce graduates who understand the complexities of a military force, enabled to create maximum leverage by the integration of operations and technology. Noting the dynamic nature of security and military operations, Ferrari recommended the universities make focused changes to their academic programs to remain relevant and successful.

“If we are to succeed in broadening our partnership even further, I believe we will want to make some significant adjustments to our academic programs,” he said. “Today’s greatest military and security challenges are becoming more complex and often require multidisciplinary solutions.”

To address these ever-changing and complex scenarios, Ferrari recommended a greater focus on academic research at the graduate level, and shared this sentiment with students and faculty at NUS during his campus visit. 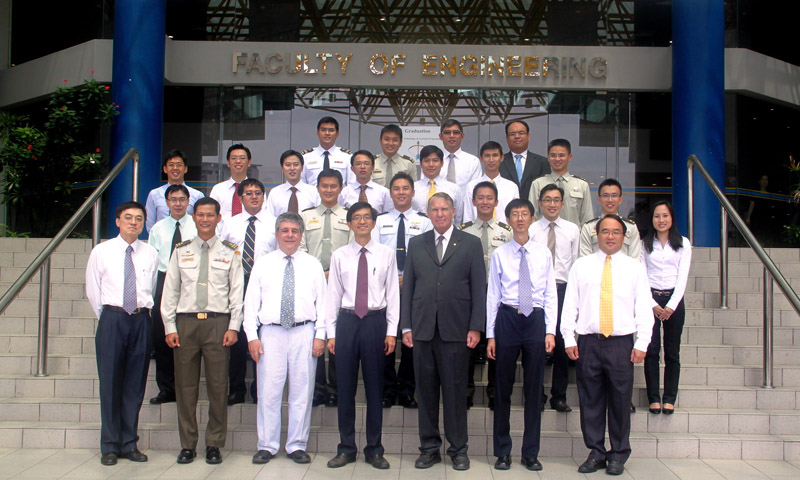 “I have been here this week discussing with the NUS TDSI leadership some possible improvements and expansions of the TDSI NUS-NPS program through a greater emphasis on graduate student research focused on defense and national security science, technology and operational issues,” said Ferrari.

Noting the academic programs currently in development at NPS, Ferrari shared with students the theory that advancements in technology also have implications on policy that need to be addressed.

“In the areas of traditional defense, NPS is developing new science and engineering programs in expeditionary energy, renewable energy for base operations, cyber systems and operations, robotics, drones and other unmanned vehicles,” Ferrari noted. “The science and technology in these cases is not enough. All of these projects will have a policy component because they can be linked to other topics including human rights, economic development or climate change. We want to insure that the NPS educational experience for Singapore’s military officers and your defense civilian students is the best in the world.”

Ferrari closed his remarks by wishing the students well, and noting their participation in an academic partnership such as the one between NPS and NUS, is a model to be followed by actors on the world stage.

“I look and hope for a future where the world’s great nations will join in partnerships such as ours,” noted Ferrari. “Perhaps even join our NPS-NUS partnership to address the future of global sustainability and to transform global education with the creativity, innovation and hard work that these young graduates have demonstrated in the past 18 months.”