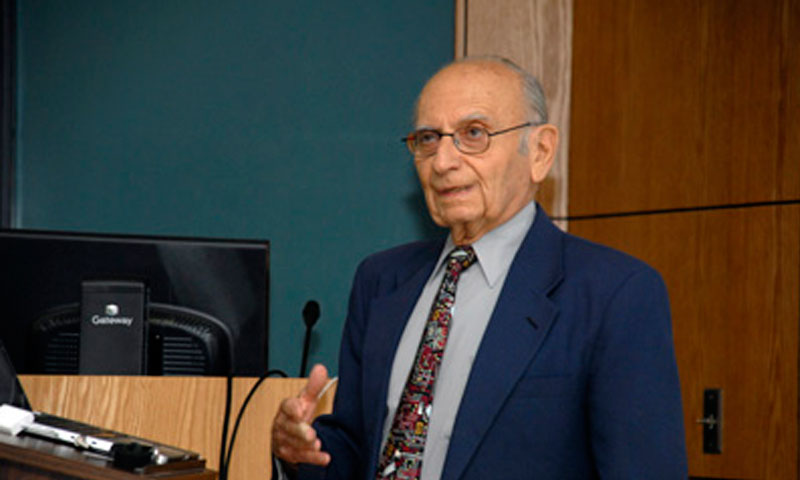 Dr. George Bekey, Emeritus Professor of Computer Science at the University of Southern California , and the Distinguished Adjunct Professor of Engineering at California Polytech University, San Luis Obispo shares a lecture on autonomous systems with NPS students, staff and faculty in ME Auditorium.

A captivated audience of NPS students, faculty and staff attended a lecture on Autonomous Systems, presented by George Bekey, Emeritus Professor of Computer Science at the University of Southern California, and the Distinguished Adjunct Professor of Engineering at California Polytechnic University, San Luis Obispo.

Bekey has an extensive background in robotics, and spoke about the kinds of technologies emerging in the field of autonomous systems. He has written several books on the topic, and is also an expert in Electrical and Biomedical Engineering. Autonomous systems, those that perform all or some of their activities without human command, are gaining traction in both the military and civilian sectors, a trend that Bekey noted was likely to continue.

"I've been in robotics since the 1980s," said Bekey. "I've seen the field change over time from when a robot was only an arm that lifted an automobile engine and dropped it onto a chassis on an assembly line. Now, robots are everywhere."

While human-like robots, called humanoids, are still years away from gaining momentum in the United States, there is one particular robot that has is owned by five million people worldwide, and is commonly found in homes in the U.S. The iRobot Roomba Vacuum Cleaner operates wirelessly and uses sensors to navigate around obstacles. The small round robot avoids drop offs such as stairs and weighs only eight pounds. Bekey explained that as the technology becomes more readily available, the kinds of tasks that robots will do, and the demand for their services are likely to grow.

"When something is sold in the millions, then it's no longer a luxury, it's a commodity," said Bekey. "And I think that's an example of a way in which robots will increasingly be present in our lives."

Many harvesters in Europe are picking up on the growing trend in robotics and are relying on autonomous systems to offset the growing cost of labor in the fields. Shape adapting technology even allows designers to create harvesting robots with the ability to grasp a single piece of fruit off of a tree.

While autonomous systems are gaining popularity in the civilian world, they have already proven their worth tenfold in the military sector. The iRobot Packbot is one such system, time and again proving itself by saving the warfighter from Improvised Explosive Devices (IED). Used by troops in theater, the Packbot is a small robot, weighing between 38-54 pounds, which can be operated remotely to explore suspicious objects.

The U.S. has taken the lead in military robotics capabilities, and has invested in funding unmanned systems that can perform dangerous tasks that threaten the lives of the warfighters. Unmanned systems are a fitting alternative to having soldiers perform tasks that are dull, dirty or dangerous, explained Bekey.

"From a military point of view, we use robotics because they provide us with the ability to expand the range of an individual solder," said Bekey. "The warfighters effectiveness is multiplied because you can control more than one robot, penetrate enemy territory further, and have fewer casualties on our side."

As these capabilities gain momentum, the question of ethics has become a hot topic of conversation. Robot ethics is a rapidly growing field, exploring issues like proportional response, legal responsibility for a robot's actions, and the pros and cons of using machines to perform tasks without the influence of human emotion. One of the most controversial issues raised in robot ethics surrounds the systems capable of utilizing lethal force without a human operator dictating the command.

South Korea currently has a Sentry Robot positioned in the Demilitarized Zone that separates them from the North. Using heat, voice and motion detecting capabilities, the robot is equipped with a 5mm machine gun, and the power to shoot intruders on the spot, following an audio warning. While the firing capabilities can be remotely operated by a command post to which the video and audio feeds stream, the robot also has the authority to fire without a human controller.

This capability, while rarely utilized anywhere in the world, is one that the U.S. has been most reluctant to adopt. The ethical issue is a key factor, Bekey noted, but one that may change over time as adversaries begin to take advantage of the technology and use it against us.

"All U.S. robotic weapons today are fired by human controllers. But every roboticist that I know, in and out of the military, is of the same view … It's not a question of whether robots will have the ability to select their targets and fire their weapons. It’s a question of when."

The Graduate School of Engineering and Applied Sciences regularly hosts experts from across disciplines as part of the Distinguished Lecture Series.