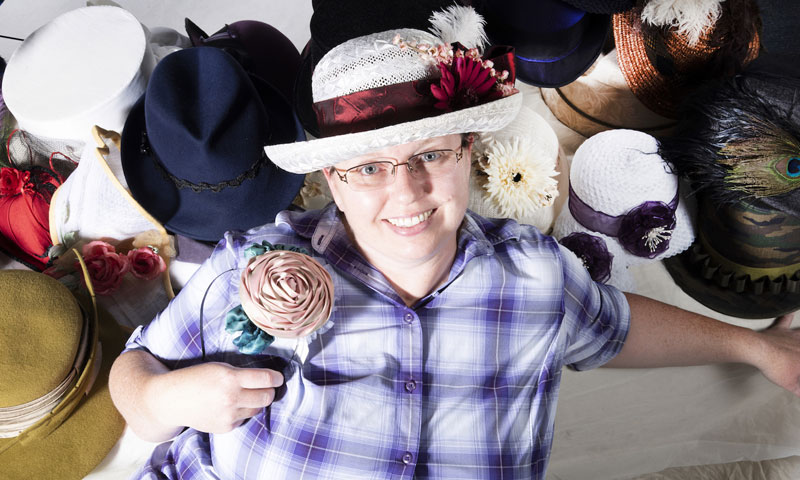 By day, Dippold guides faculty through the byzantine world of research funding as a systems and data management specialist with NPS’ Research and Sponsored Programs Office (RSPO). This can be challenging work, but she has the right disposition for it: meticulous, methodical and a keen eye for detail.

“My workdays range from helping out customers who are using the new Kuali Coeus system to troubleshooting any bugs, then also working on content for our office website as well as answering any data calls that come into the research office about the sponsor programs and the research that we do,” Dippold said.

Beyond her university work, however, she turns her fine attention to detail towards making hats entirely from scratch. Drawing inspiration from the world around her, Dippold conceives of new headwear and follows an impressively meticulous process. She gathers all the required materials, selects and prepares fabric, carefully forms the hat over a wooden block, and adorns it with flowers and assorted accoutrements of her own creation.

The whole process can take anywhere from three days to two weeks, depending on the type and level of detail of the hat.

“It’s great artistic release. If I’m frustrated about something, I can just go in and tinker with the flower making or embark on a whole hat-making adventure,” she laughed. “I’ll often be working on a piece and not realize that it’s dark outside and time to go to bed.

“I really lose myself. I get in the zone, put a movie on the TV and just go,” Dippold continued. “That’s actually how I often measure how long it takes me to build a hat. How many movies it takes me!”

Dippold’s devotion to millinery dates back to 2007, when a friend challenged her to create her own period costume for the Great Dickens Christmas Fair in San Francisco, an annual recreation of Victorian-Era London. Challenge accepted.

Dippold fabricated an entire outfit “from the bottom up” – corset, drawers, dress, skirt, coat and hat. It was a painful but enlightening process.

“I’ve always hated making clothing,” she chuckled. Making hats, on the other hand, she fell deeply and thoroughly in love with. Dippold soon branched out from Victorian England, beginning with a 1920s era fascination through the popular British television series Downton Abbey and speakeasy flappers.

She has since created about 100 hats of copious types and styles. Ideas come from a variety of sources, but Dippold prefers to start with a specific image rather than an abstract concept.

“Basically, my inspiration can come from just about anything; seeing something out in nature that I want to reproduce, for example,” she said. “I’ve been spending time out in NPS’ Rose Garden looking at the flowers, checking out colors, patterns and shapes and taking photos so that I can go back and reproduce them to make them look as lifelike as possible.”

Dippold’s hat production - replete with the flowers, roses, dandelions and sundry other items that adorn them - is only just beginning and she has her eyes set on founding a business with her husband, who makes the blocks which form the hats.

“It’s been 12 years of learning and constructing, off and on, so I can’t say I’m a beginner anymore,” Dippold said. “It’s time to either fish or cut bait.”