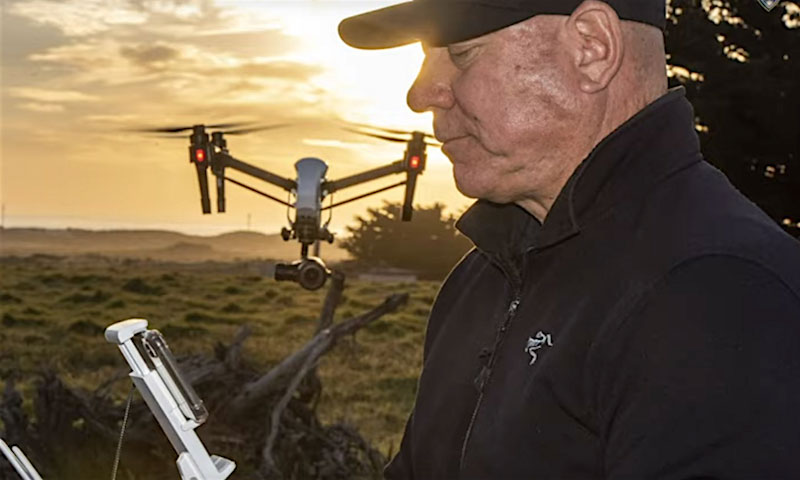 The drone went down on a blustery June afternoon. The satellite link Naval Postgraduate School (NPS) students and faculty were using for their research had been disrupted for the briefest of moments, but it was enough for a gust of wind to send the autonomous aerial vehicle (AAV) plummeting onto a rooftop in “Impossible City,” a mock urban training and research facility in the desolate reaches of Fort Ord.

The group struggled to reach their downed research craft, but to no avail. As a last measure, they reached out to the one man they knew could help: Lt. Edward “Eddie” Macias with the Naval Support Activity Monterey (NSAM) Police Department, who they’ve all heard is an avid drone operator and enthusiast.

“I received a call from NPS asking if I could rescue a drone that was stuck on a really high roof; I said yes, I’d be honored,” he recalled. “When I showed up, I knew exactly what to do.”

Macias swiftly MacGyver’ed some string together into a hook, affixed it to a drone of his own and sent it zipping up into the winds. Leveling it out, he guided his drone via video feed towards the stricken bird and in one fell swoop caught it up and carefully lowered it down to the grateful group without damaging either drone.

Saving a downed research AAV may seem like the exceptional event, but it really is quite the norm for Macias. Most people know Eddie as the kind, affable gate guard who has a friendly word while he’s ensuring the safety and security of the base, but his decades of serving and protecting the NPS community is replete with similar stories.

Anecdotes such as these serve as acute reminders of the invaluable role Macias and the entirety of the staff at NPS play in ensuring the well-being, continuity and strength of the U.S. military’s finest academic institution. Even routine daily duties - such as Macias’ role as Watchbill Commander - provide the bedrock that keeps NPS running.

“I know all the staff members - what they do, where they work, what kind of car they drive - and they always ask me how I remember their names,” he said. “Well, I’ve gotten to know the people I’ve worked with for 13 years. It’s really important for me to build good rapport with the people that are here, and I get compliments on that all the time.”

After graduating high school, Macias knew he “wanted a bit of a challenge” and immediately enlisted in the Navy Reserves. Then 9/11 happened. As the nation struggled to react to the attacks, Macias heeded the call to Active Duty and for the next three years stood watch over NPS as a Master-At-Arms.

Afterwards, he undertook several follow-on deployments, including personal security details for Presidents George W. Bush and Barack Obama, as well as security work in Operation Enduring Freedom, but knew he had found his calling. Macias returned to California to enroll in the police academy at Fresno City College and, in 2008, returned to NPS as a federal police officer.

“I’ve been here ever since,” he mused. “NPS is probably the best place in Navy Region Southwest, if not the world. It’s the dream job for Navy police officers to work: world-class people attending a world-class school, everybody’s always in a good mood and the weather’s great all year round.”

The breathtaking natural beauty of the Monterey Peninsula doesn’t hurt either, and it’s an aspect Macias is especially devoted to: every chance he gets, he employs his personal drone fleet to explore and film the area’s majestic scenery from the air.

“I enjoy flying my drones along the coastline, in the mountains and in the foothills,” Macias said. “The imagery that you get from drones you just can’t get from the ground; you can pretty much go places you couldn’t go otherwise.”

“The end results are just phenomenal,” he added. “It feels like you’re flying.”

Macias’ passion was initially ignited during a 2012 deployment to headquarters, U.S. Africa Command (AFRICOM) in Stuttgart, Germany, where he observed live feeds from military AAVs. In September of that year, Macias watched with bated breath as the now-infamous Battle of Benghazi unfolded two thousand miles away.

The attacks were an unmitigated tragedy, but Macias was hooked and took up the hobby with vigor when he returned to California.

To call Macias a “drone enthusiast,” however, would perhaps be an understatement.

Over the last six years, he has acquired no less than seven professional-grade commercial drones, not including the multitude of smaller ones he refers to as “just toys” and a wide array of accessories, such as a forward-looking infrared (FLIR) camera which enables him to fly and film at night.

“It’s an expensive hobby to have,” Macias laughed. “But I enjoy it very much and the money is well-spent.”

It’s an addiction he lovingly shares with the NPS community. Macias has held a number of informal classes and lectures around campus on drone imagery and camera placement, has helped familiarize students with AAVs for their research, and is actively involved with NPS’ Robo Dojo building racing drones.

“The staff members here at NPS know that I enjoy flying drones and I’m always willing to help them on research projects and with their students,” he said.