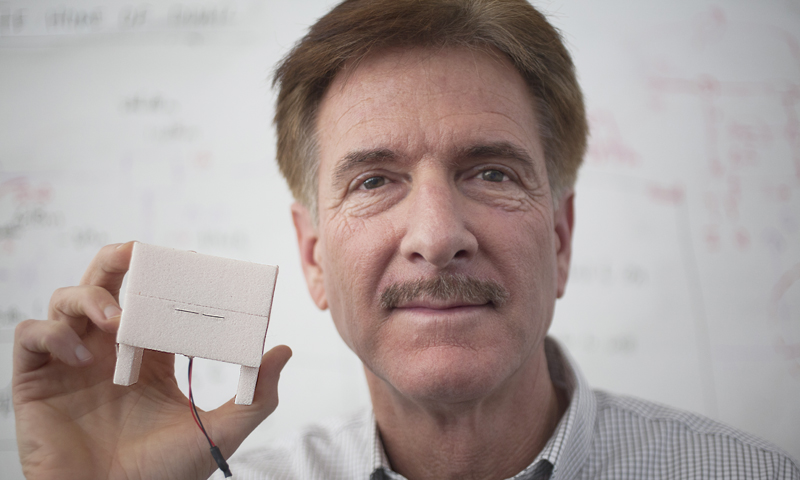 Professor David Jenn with the NPS Department of Electrical and Computer Engineering holds his recently patented Dipole with an Unbalanced Microstrip Feed antenna. The tiny antenna, known in the industry as a “rectenna,” captures ambient electromagnetic waves and converts them to usable current.

Professor David Jenn with the Naval Postgraduate School (NPS) Department of Electrical and Computer Engineering (ECE) has been awarded a patent for his Dipole with an Unbalanced Microstrip Feed antenna. Jenn’s antenna, known in the industry as a “rectenna,” is small in size, but he hopes that what it lacks in stature will be made up for in functionality.

“I invented a small antenna designed to be integrated into sensor objects and to be used for a wide variety of things,” said Jenn. “It is important to [be able to] minimize the size and weight of antennas and feeding circuitry.”

“Conventional dipole antennas are fed with a tuning circuit known as a balun. The balun is effective at matching the antenna to the dipole, but adds to the size and weight [of the assembly]. The new patented design eliminates the balun, allowing for a small lightweight assembly,” Jenn explained.

Without having to contend with balun circuits, Jenn is able to reduce the size and complexity of his antennas and minimize transmission loss.

The small antenna works on the notion that all waves – whether radio, cell or microwave – are energy. If harnessed, those waves can be routed through a circuit and transformed into electrical current, which can be then used to power devices or to charge batteries. “It’s all energy, it’s just in one kind of wave and we are converting it to another,” explained Jenn. “Once you get the wave into a circuit, you can convert it into AC or DC current.”

Because of Jenn’s antenna size, it can be used in conjunction with circuits on very small objects. In his past research, he used the same concept to fly very small unmanned aerial vehicles (UAVs).

“In the past, I have used wireless power transmission [WPT] to propel micro UAVs that are only a few inches in size. Such small UAVs can only carry a small amount of fuel, and therefore cannot stay airborne for any useful length of time. WPT allows unlimited flight duration, but the ranges are restricted because the power that can be received decreases with range, just like a radio signal decreases with range from the transmitter,” said Jenn.

Jenn has been exploring WPT at the university for quite some time, but the potential for transferring power wirelessly is gaining traction outside the laboratory. Researchers and policy makers are taking a hard look at the possibility of wirelessly powering everything from homes to automobiles. In fact, while the concept may appear fantastic, researchers at NASA are considering the practically of transmitting energy from space to earth-based receivers to power remote military bases.

“Space Solar Power (SSP), combined with WPT, offers the far-term potential to solve major energy problems on Earth,” the paper describes. “In the long-term, we aspire to beam energy to Earth from geostationary Earth orbit, or even further distances in space. In the near-term, we can beam power over more moderate distances, but still stretch the limits of today’s technology.”

While Jenn’s invention may have more modest applications, it follows the same essential principles explored by these scientists.

With the patent on his rectenna now complete, Jenn has turned his attention to large, phased-array antennas like those used on shipboard radar assemblies and large UAVs like the Predator drone. But if Jenn and his colleagues are correct, his rectenna is a small sign of big things to come.