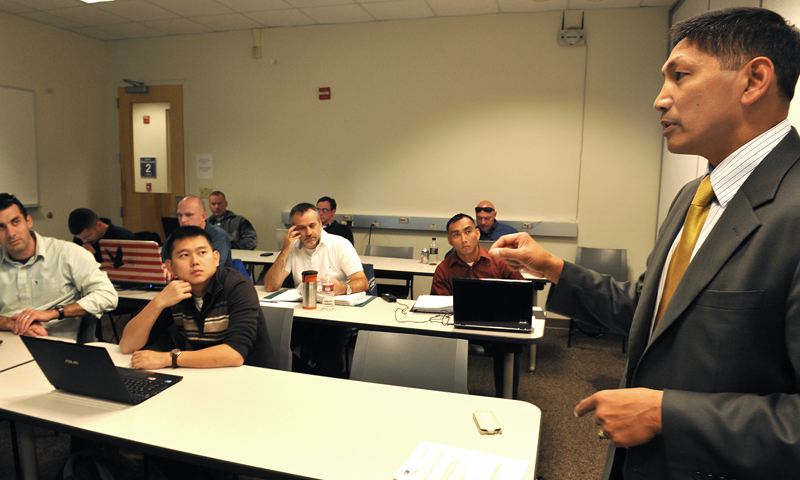 Following 26 years of service to the U.S. Army, including a tour as the NPS’ Associate Dean in the Graduate School of Operational and Information Sciences, retired Col. Andy Hernandez has returned to NPS to guide future service leaders in the Systems Engineering department.

Associate Prof. Andy Hernandez believes that coming back to Naval Postgraduate School (NPS) was the best decision and the best fit for what he says is important work, teaching future leaders in the Systems Engineering Department.

It wasn’t that long ago that Col. Hernandez served as the Graduate School of Operational and Information Sciences Associate Dean. He also served as Military Faculty in Operations Research (OR), all the while pursuing a Ph.D. in Operations Research (OR). Well schooled in OR/Systems Analysis, he has just completed a 26-year Army career as the Chief of the Warfighting Analysis Division, G-8, Department of Army, including a tour in Iraq as the Director, Analysis and Assessments, Strategic Communications, J9, U.S. Forces Iraq.

“As I looked around for what I was going to do in my next life, opportunities to work in industry emerged, but I really wanted to work with students, our rising leaders," said Hernandez. Coincidentally, Prof. and Systems Engineering Chair Clifford Whitcomb had an opening in the department, which would eventually reunite Hernandez with his colleague and friend, Associate Prof. Gene Paulo. They currently co-teach a modeling and simulation course.  “I’ve known Andy for over 10 years.  We worked together when he was the GSOIS associate dean and then the director of Joint Improvised Explosive Device Defeat Organization here at NPS. I chaired the hiring committee that recommended Andy for our department. Andy’s experience in modeling and simulation, Department of Defense acquisition, and operations research, as well as his enthusiasm for working with students, made him a perfect candidate to join our Systems Engineering faculty,” said Associate Prof. Gene Paulo.

Recently during an Army Officer’s promotion ceremony, a resounding testimonial from one of Hernandez’s former students exemplified exactly what Andy’s underpinning philosophies is about ... taking care of your troops. NPS Operations Research alumnus Major Richard Brown ('06), who currently works at U.S. Army Training and Doctrine Command (TRADOC) Monterey, personally thanked Hernandez during his promotion ceremony. Brown said the then GSOIS Associate Dean and one-time Senior Army Representative took interest in him when there seemed to be no one else that could help in his dilemma.

“He took time to ensure that I could do the best work possible for the Army and that I was doing something that I really enjoyed. I will appreciate this for the rest of my life because I was in a tough spot with regards to my education and military career. The Army had sent me to NPS to pursue a master’s degree in Middle Eastern Studies, but I had a numerical and computational background. I had made some calls about changing my master’s program, and was denied several times over. I told Col. Hernandez this, and he effectively made it his mission, along with whatever else he needed to do, to ensure that I had the opportunity to do what I really enjoyed. I have no idea who he contacted or what he said, but in the end, I got the opportunity that I needed and wanted. He is a phenomenal individual, at least to me he is,” said Brown.

Others in the OR department echo the same sentiments. “Col. Hernandez was all about taking care of the students,” adds GSOIS Administrative Management Specialist Janet Borchardt who has worked with four previous associate deans.

Hernandez not only connects with his students, but has had the opportunity to present products from NPS in diplomatic circles.  Last week, he and OR department Military Faculty, Lt. Col. Chris Nannini, briefed Assistant Secretary General for Field Support Anthony Banbury at the U.N. “In cooperation with the U.S. Partnership for Peace Training and Education Center (USPTC) here at NPS, we used the Peace Support Operations Model (PSOM), developed by the United Kingdom Defence Science Technology Laboratory to increase efficiency and effectiveness of peacekeepers in their missions throughout a given region,” said Hernandez.  “Peacegaming has the potential to become an important tool for learning how to pre-empt conflict within a nation attempting to attain stability.  A game developed and administered by Nannini in Kyrgyzstan was explained to Banbury, which Hernandez followed with a presentation for post-game analysis.  Another Hernandez associate, NPS Senior Lecturer Jeff Appleget administered a modified game in Kazakhstan.

“PSOM is a unique tool that provides socio-economic approaches to peace support doctrine. We can assist these nascent democracies by conducting game analysis to gain insights that can be supported with analytics,” added Hernandez. This week he and Nannini are attending and presenting the Game for Peace and post-game analysis at the International Association of Peacekeeping Training Centers in Carlisle, Penn.

Back in the classroom Hernandez believes that his own field experience can add to the student’s learning environment. Hernandez asks his students to have agility in their thinking, and not so much their ability to exercise muscle memory.  I believe that the Systems Engineering Department creates a great environment for my style of teaching,” said Hernandez.  It has a solid foundation for growth and is populated with very talented people with diverse backgrounds,” he added.

Hernandez says that he looks forward to building a good research program that collaborates with all disciplines throughout NPS and supports Warfighters and student education. "If I can accomplish that, I’ll chalk myself up as successful," he notes.