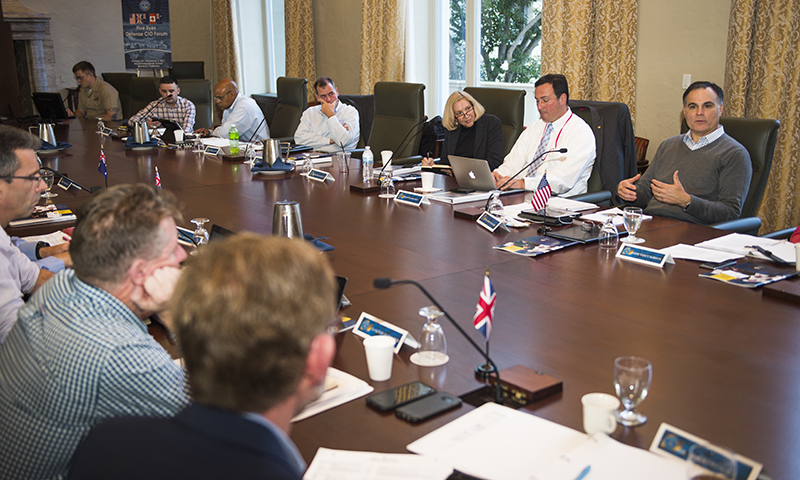 Chief Information Officers (CIOs) from nations of the intelligence alliance of the U.S., U.K., Canada, Australia and New Zealand, collectively known as the FiveEyes, gathered at the Naval Postgraduate School (NPS), Oct. 30 – Nov. 3, for the annual CIO Defense Forum.

“Three to four times a year, the CIOs from the FiveEyes countries get together and discuss issues of mutual interest and benefit,” said the Department of Defense (DOD) acting Chief Information Officer Dr. John Zangardi, a 1994 graduate of NPS’ financial management program.

“It is important for us to keep in touch with all of our FiveEyes allies to maintain the strong relationship that has lasted for years, and this forum, in particular, focuses on mutual issues we face within the realm of IT, including identity management and satellite communications, combined buying power, and how we tackle those issues with interoperability as we move in a similar direction,” Zangardi continued.

The FiveEyes began in 1946 when an alliance of the five English-speaking countries developed a set of bilateral agreements that would eventually come to be known as the UKUSA Agreements, establishing an alliance for the purpose of sharing intelligence, and in particular, signals intelligence.

For NPS’ own Chief Information Officer, Joe LoPiccolo, serving as host for the forum was a great opportunity for the university to hear first-hand about the national issues and challenges facing the DOD, and defense departments of the FiveEyes allies.

“This forum was a great opportunity for NPS to listen to CIOs from the four other FiveEyes countries, and our own defense department CIO, to set the direction for the future of IT in support of the warfighter,” said LoPiccolo. “It is critically important for us to be aligned to that, and to be supportive of where the strategic direction is headed, so that we can have more capabilities and understanding of warfighter requirements and needs.”

Zangardi, a retired Naval Flight Officer who served in a variety of command and staff assignments, became the Principal Deputy DOD CIO in October 2016, and was just recently announced as the next Chief Information Officer for the Department of Homeland Security. When the U.S.’s turn to host the forum came up, Zangardi immediately thought of NPS as an appropriate backdrop for the forum, where students, faculty and administrators routinely study some of the very issues the CIOs discussed.

“I have maintained my connections with NPS and have routinely held things here, and the reason for this is that the facilities are fantastic, the support from the school is incredible, and I really enjoy engaging with the faculty,” said Zangardi. “NPS is one of my favorite places to come back and experience the high-level of academic achievement ... Very few other places give us the ability to have a discussion on a certain topic and easily be able to find an expert in that field.

“The Naval Postgraduate school is a key enabler of the U.S defense department,” Zangardi added. “The skills that are imparted to the students that attend school here are important for our future in establishing the best military defense in the world.”

In addition to its resident expertise, NPS’ proximity to the Silicon Valley provided attendees with an opportunity to visit industries of particular interest just a short drive away.

“One of the things of interest to our partners is going to a satellite facility, so we will be visiting Lockheed Martin, who produces a lot of our GPS systems and satellites,” said Zangardi. “This will give us a firsthand view on what they are doing and how these satellites are built. Additionally, we will spend some time talking about additive manufacturing, and how building materials such as titanium, used to build fuel cells, could lead to higher cost savings.”

Much of the capabilities and roles of the FiveEyes have expanded since the beginning of the war on terrorism. Ultimately, Zangardi says, the forum is about seeking even stronger collaboration between the long-standing collective of allies given the common national security challenges facing the collective today.

“We are very close allies, and as such, we have to recognize that over the past century, we don’t go alone ... Very likely, if we go, the FiveEyes would be with us,” Zangardi said. “Making sure we can achieve things in interoperability is critical, because when an issue comes up, we know who to reach out too.

“That is the true advantage of this,” he continued. “We have established relationships and we know how to work side by side to tackle major challenges.”