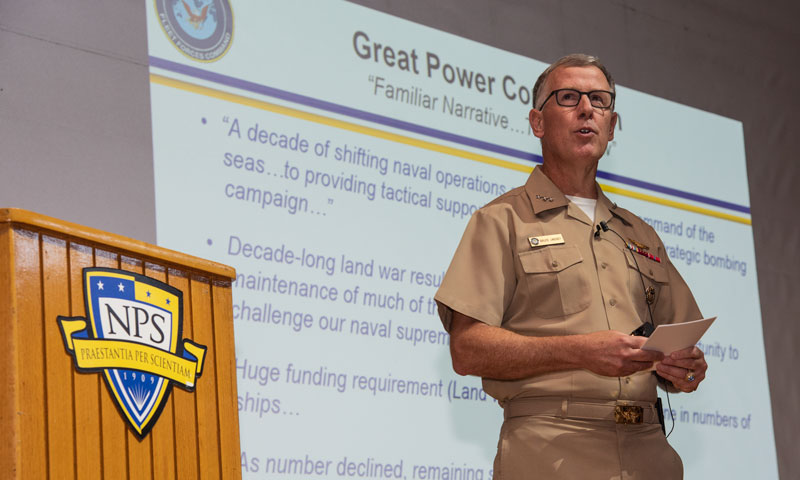 Deputy Commander, U.S. Fleet Forces Command Vice Admiral Bruce H. Lindsey offers a candid discussion on the challenges facing American society, and the importance of leadership in overcoming them, during the latest NPS Secretary of the Navy Guest Lecture, July 24.

“I am a big fan of NPS,” said Vice Adm. Bruce H. Lindsey. “I may not be an alumnus myself, but I am a fan because of all the great people that you have here, and most importantly, because of the academic rigor that NPS brings all throughout the world.

Lindsey’s career has been marked with several high-profile commands including his time as the commanding officer of USS Carl Vinson (CVN 70) and overseeing its humanitarian assistance and disaster relief to the people of Haiti during Operation Unified Response. Following his tour with the Carl Vinson, he went on to command the USS Dwight D. Eisenhower Carrier Strike Group and Naval Air Force Atlantic.

Before taking the stage, Lindsey was introduced by a familiar face for the guest lecturer, NPS program officer Cmdr. Paul Rasmussen, who had previously served with Lindsey aboard Vinson as the ship’s “Mini Boss,” or Assistant Air Officer.

Lindsey began his presentation to the students and faculty with a discussion on the importance of future innovation and advanced technologies, such as artificial intelligence, autonomy, quantum computing and neuro-networks.

“These are the problems of your generation, and we have to figure it out before our adversaries figure it out. You guys are doing that here and now,” he said.

“Each and every one of you are leaders and I want to challenge you to think about our future, what roles you will play, and how we will get there and shape that future,” he continued. “My generation has come and gone, this is your time. You don’t need people like me telling you what to do, you need people like me fighting for your ideas back in the Pentagon.”

Lindsey then turned his attention to a comparison of the U.S. political environment of the early 1980s to the current environment – a time that was defined by a large-scale military build-up following a long, drawn out war, while living in a world dominated by two world powers.

“From those two data points, can we predict anything?” Lindsey asked. “Well, according to the SECDEF, the Chairmen of the Joint Chiefs of Staffs and the Chief of Naval Operations, we are entering an era of ‘great power competition,’” said Lindsey, noting the economic importance of the maritime domain and China’s growing influence in trade. “We are 100 percent dependent on stuff that allows us to be ‘smart’ in warfare to have an advantage. But we don’t have an advantage, they do,” he warned.

Lindsey then turned his attention to Russia, looking at the “zeros and ones” of state-sponsored intrusion, and efforts to undermine U.S. political systems. He challenged the audience to consider the implications of these acts on U.S. national security, and what it could potentially evolve into in the future.

Ultimately, Lindsey noted, the National Security Strategy and a world dominated by great state powers, requires an investment in our force ... Something the officer students in attendance will play a key role in.

“You must build a more lethal force, that is the only thing China and Russia will understand. You must develop that force, you must generate that force, and you must employ that force. This is the force that you are going to fight with in the next decade, and I hope you get this right,“ he said.

Lindsey then transitioned to his final topic, sharing a graph of the U.S. debt to GDP ratio with the audience, emphasizing its severity to U.S. national security.

“The public often forgets that we are currently at war, and our problems are so far away. But here is where it will affect them, in the pocket book,” he said. “Our debt is now nearly 105 percent of our GDP and growing, the most since World War II.”

The Congressional Budget Office has that trajectory going up to 150 percent by 2047, he said, past the point where recent financial crises hit Greece and Spain. He again challenged the students to consider what they can do to ensure the investments being made in them is directly aligned with goals outlined in U.S. national security.

“This is the mess that we are leaving you ... great power competition at a time when our pocket book is really stretched,” he said in closing his presentation. “As you go back and do your research and write your papers, everyone should start with, ‘In support of the National Defense Strategy, my project will ….’ NPS provides the knowledge and you in the audience have the ideas that we need to figure it out.”