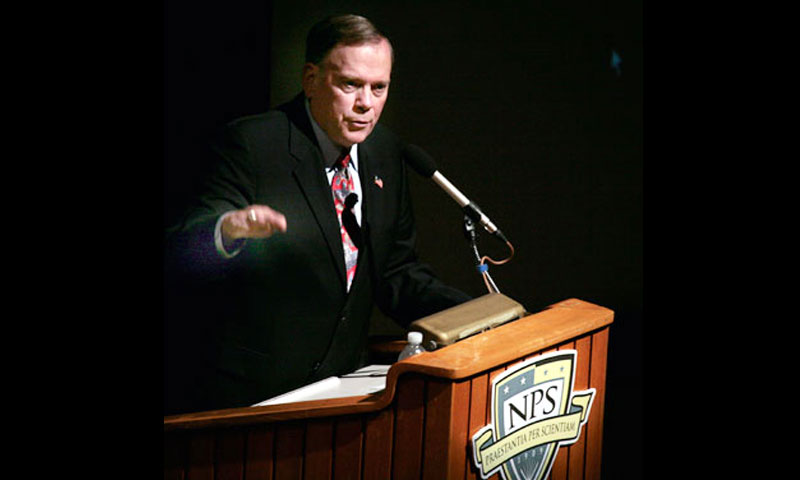 Former U.S. Air Force Chief of Staff retired General John P. Jumper addresses students on the constant of change during his Secretary of the Navy Guest Lecture in King Auditorium.

A former Joint Chief gave a special guest lecture to the student body at the Naval Postgraduate School before being honored the same evening by a reception in his honor by the NPS Foundation.

Retired Air Force Gen. John P. Jumper met first with students to discuss transformations in military affairs, acquisition and how business is handled as a part of the ongoing Secretary of the Navy Guest Lecture series. He gave a solemn reminder to the audience of the costs of war in human lives before he discussed the costs in dollars and time.

“It always is helpful to remind ourselves of the consequences of a world gone wrong,” Jumper said, referencing the tragedies of the last World War. “Each service has its own set of numbers we should try to remember when we talk about responsibilities. Responsibilities I have had, and responsibilities you will have.”

Moving on, he discussed the world economic crisis and financial relationships with emergent regions of the world. China, for example, while becoming one of the world’s financial giants, is still affected by internal strife through the same sorts of disasters that could happen anywhere, he said.

In the end, the overarching theme of his lecture was one of transformation. The realizations made during the World Wars, devastating and iconic figures of our time like Saddam Hussein and Osama bin Laden and how they changed the way we operate, and the extrapolation of what were once simple events into tangled webs of bureaucracy and politics all meshed together into a mosaic of understanding that change happens.

After answering students’ questions from the lecture, Jumper took some time to get better acquainted with the campus, and later arrived at the Herrmann Hall Quarterdeck for the NPS Foundation’s Quarterly Event in his honor. Jumper was welcomed by school leadership, supporters from the community and Foundation for a wine and cheese reception.

“It’s quite an honor to have the general join us here,” said retired Rear Adm. Merrill Ruck, Executive Director of the NPS Foundation. “The chance for the students and the community to interact with someone like John is great. He’s entertaining, he’s cordial, and most of all, he is genuinely insightful.”

Jumper retired from the U.S. Air Force in 2005 after a distinguished 39-year military career. As Air Force Chief of Staff, the service’s senior military officer, Jumper was a frequent advisor to the Secretary of Defense, the National Security Council and the President.

Jumper holds a degree in electrical engineering from the Virginia Military Institute and an M.B.A from Golden Gate University in San Francisco. He currently serves on the boards of SAIC, Inc., Jacobs Engineering Group, Inc., TechTeam Global, Inc. and Somanetics Corporation, as well as on the non-profit boards of The Marshall Foundation, the Air Force Village Charitable Foundation, and The American Air Museum in Britain.

The Secretary of the Navy Guest Lectures held at Naval Postgraduate School are a series of professional lectures designed to help students and faculty link their study, teaching and research efforts to the defense needs of the nation. The lectures are by high-level authorities and are scheduled at regular intervals throughout the year, and whenever possible.