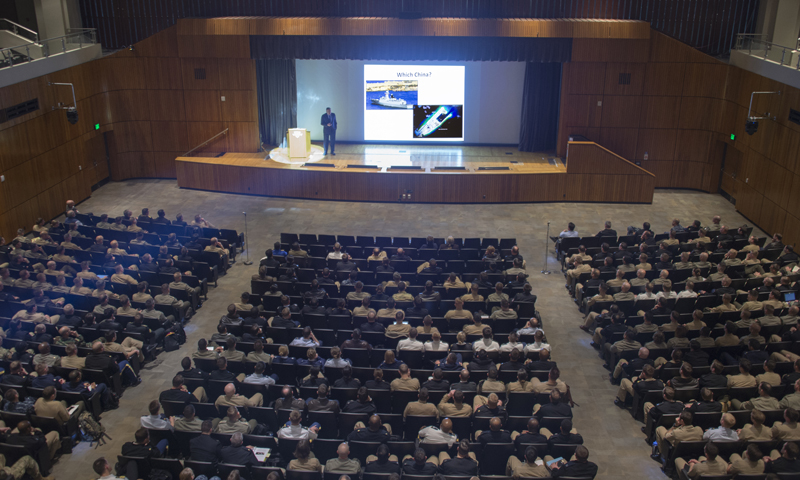 Retired U.S. Army Lt. Gen. Karl Eikenberry spoke to NPS students, faculty and staff in King Auditorium on the complexity of China and the history that has developed China’s current strategic goals, during the latest Secretary of the Navy Guest Lecture series, Jan. 18.

Retired U.S. Army Lt. Gen. Karl Eikenberry spoke to NPS students, faculty and staff in King Auditorium on the complexity of China and the history that has developed China’s current strategic goals, during the latest Secretary of the Navy Guest Lecture series, Jan. 18. Eikenberry served as the Assistant Army Attaché, the Defense Attaché in the U.S. Embassy in the People’s Republic of China, and most recently as the U.S. ambassador to Afghanistan.

“There are several historical factors that play very important roles in shaping China’s world views, their strategic culture and its thinking about the United States,” said Eikenberry, “although I have it framed as historical narrative you can think in three different contexts, one is culture itself, second nationalism and third is ideology.”

“Is it the China with a space program that has goals to put a space station up with continuous manning, and a continually crewed lunar mission and an unmanned mission to mars? Or is the China where 45% of the population lives in rural agricultural areas?

“Is it this China who’s Navy has kept a small flotilla on patrol combating pirating and smuggling, which cooperate with U.S. led task force and European Union led task force? Or is it this China who has been on an island building campaign in the South China Sea area building seven islands creating 3,200 acres of new real estate on, which they have built long airstrips capable of landing any fighter or bomber or transport aircraft?

“The answer to this is all of the above. This is all of China, and this is the complexity that is understanding the country and more specifically when you come to defense and military planning this is part of the complex mosaic you will be looking at,” added Eikenberry.

Eikenberry continued to describe several historical events that have shaped the Chinese culture, government and ideology.

“It’s in the aftermath of the opium war in 1840, the British forced the Chinese government to accept its sail of opium in its markets,” said Eikenberry. “Moving forward to 1894 to 1895, Japan crushes the Chinese Army and Navy and then you go onto 1900 with the boxer rebellion with a nativist and xenophobic movement that’s begun in china is crushed by an eight nation foreign coalition.

“By 1912, nationalist China and these mottos are established: Nationalist, Democracy, Livelihood and the People. Where ever you are, these are three things that if you are going to have a persuasive ideology and action program, whether you are communist or other parties, these are what will resonate with the people,” continued Eikenberry.

Eikenberry created an analogy of how he try’s to understand the current actions China is taking with regards to the Korean Peninsula based on their history in the region. This example was for those in attendance to remember that understanding China’s military and government today requires an understanding of their history and their efforts toward security, providing economic welfare for their people, and for their aspirations toward autonomy.