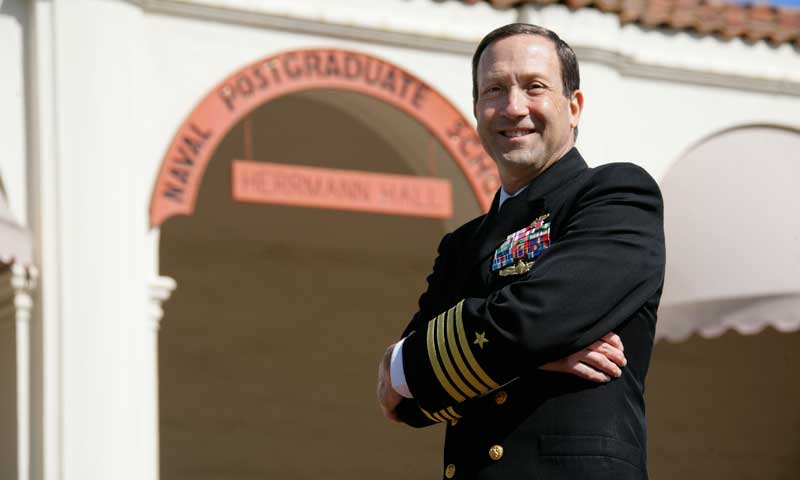 Following his time as a strategic advisor to former Chairman of the Joint Chiefs of Staff Adm. Mike Mullen, Capt. Wayne Porter recently joined NPS as the Chair of Systemic Strategy and Complexity in the Global Public Policy Academic Group.

Porter has long contemplated complexity theory and social cognitive and behavioral aspects of a strategic environment, and felt that NPS was the perfect place to explore those topics collaboratively in a setting where they could have a tangible and lasting impact on research and education.

With the support of Mullen, who took Porter’s idea to Secretary of Defense Leon Panetta, the NPS Chair of Systemic Strategy and Complexity was established. Having only recently gotten settled into his new office here on campus, Porter has already hit the ground running, connecting with professors across departments to explore areas for systemic strategy and complexity to be incorporated into lectures and courses.

“This new position was designed basically to expose to an interdisciplinary student audience the value of applying systems and complexity theory to operational and strategic design,” explained Porter.

He personally understands the value that this kind of theory can bring to NPS students, having received dual master’s degrees in Computer Science and Joint Command, Control, Communications, Computers, and Intelligence. Porter hopes to work on his Ph.D. during his time here, and test out systems and complexity theories in potential dissertation research.

“I wanted to be a ‘guinea pig’ to demonstrate the value of systemic strategy, because I’m convinced we need to take a much broader approach to the complex environment in which we operate. Not only that, I genuinely believe in the quality of the faculty here, the intrinsic value of the school, and the unparalleled excellence of the student body,” said Porter. “You have this dedicated group of really smart students with real-world experience. I can’t think of many other places anywhere in the world where you would have the same quality of students with that rich experiential background capable of pursuing - in an interdisciplinary environment - problem sets of global significance.

“The military doesn’t train officers to think in terms of strategy. We primarily have them focus on tactics and operations. And my sense is that the perfect place to look at strategy isn’t at a war college where the students are predisposed to look at paradigmatic historic conventions for strategy,” said Porter. “It’s a place like NPS, where you have a majority of students focused on science and engineering. This is an environment where officers who are accustomed to applying a high level of science, technology and critical thinking to mechanistic problem sets, can explore the application of these same disciplines to strategy.”

Porter has found many like-minded strategic thinkers on the NPS campus, including Ted Lewis, Executive Director of the Center for Homeland Defense and Security (CHDS). In Lewis’ book, “Bak’s Sand Pile,” he analyses self-organized criticality and its application to complex systems that affect strategy. In reading Porter’s narrative, Lewis found some shared concepts, and invited Porter as a guest lecturer future CHDS classes.

“A centerpiece of the Center for Homeland Defense and Security is the idea that homeland security is a complex network system with various forms of self-organization,” said Lewis. “This idea is articulated in my book, which resonates with Capt. Porter and Col Mykleby’s National Strategic Narrative. These ideas reinforce one another and lead to a theory of change that seems to explain what is happening in our interconnected world.

“Complex network theory, or network science for short, is a new way to frame issues yielding insights that traditional methods are unable to render,” Lewis continued. “Network science, for example, yields insights into so-called black swan events such as the financial meltdown of 2008, the Arab Spring, and flash mob behavior like Occupy Wall Street. These are all examples of networks self-organizing with corresponding emergent patterns. Capt. Porter has advanced network thinking along sociology-political lines, which promises to be very useful in foraging national strategies for a complex future.”