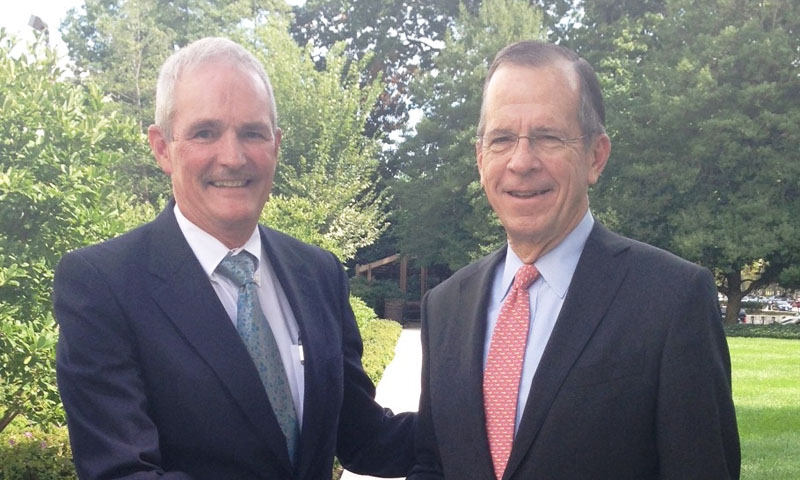 Naval Postgraduate School (NPS) alumnus and former Chairman of the Joint Chiefs of Staff retired Navy Adm. Mike Mullen was recently inducted into the National Academy of Engineering (NAE) for “for applying engineering methods in developing and executing offensive and defensive strategies for the U.S. Navy.”

The NAE is comprised of engineers that seek to provide engineering leadership to the nation. Within the engineering community, NAE membership is a prestigious, professional honor. There are currently three members of NPS’ Operations Research Department that have been honored with NAE membership.

“[Mullen] headed the world’s largest technical organization and he is widely admired,” said Brown. “He served two presidents, two [political] parties, gave hundreds of speeches and never once made a retraction, it’s remarkable.”

Mullen came to NPS at the rank of commander, and was made a student section leader.

“We look at our section leaders pretty carefully … looking at Mike, we noticed early on that he was able to get what he wanted from people without pushing them very much, he was able to use just the minimum amount of right force,” said Brown.

Brown offered an intimate look into Mullen’s early career and education, speaking about his love of basketball, weight lifting and commitment to his friends. He also recalled the difficulty Mullen had taking his course – arguably one of the more difficult courses available at NPS.

“He says he still shakes in his boots when he thinks about my class,” quipped Brown. “We understood that this was the first time in college that he really had to study.”

“I read [his thesis] again recently, and was as impressed as I’d been when I was his advisor. It was practical, implemental and the kind of thesis he could apply for the rest of his career,” said Hughes. “Adm. Mullen was studying operations research, one of our toughest curricula, and a challenge for him, but his thesis illustrated the value of his considerable experience. It was not the kind [of thesis] that any civilian could have done nor few junior officers.”

As a member of the NAE, Mullen will be adding his experience to the collective expertise of the NAE’s membership. Members are nominated to the academy and voted in by a unanimous vote. The academy was founded in 1964, but it is grounded in the National Academy of Sciences founded by President Abraham Lincoln at the height of the Civil War.

The academy is a non-profit organization with a mission to “advance the well being of the nation by promoting a vibrant engineering profession and by marshaling the expertise and insights of eminent engineers to provide independent advice to the federal government on matters involving engineering and technology.”

According to Brown, a longtime NAE member, Mullen is a welcome addition.