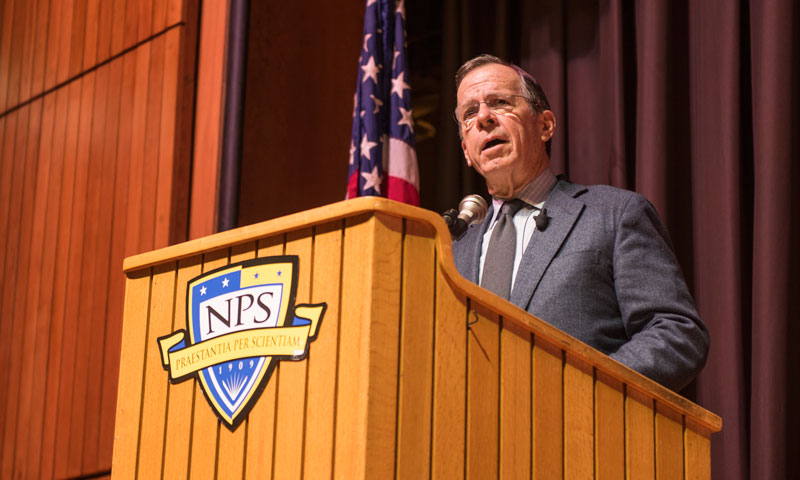 NPS alumnus and former Chairman of the Joint Chiefs of Staff retired Adm. Mike Mullen offers a candid discussion on the challenges facing American society, and the importance of leadership in facing them, during the latest SECNAV Guest Lecture.

Former Chairman of the Joint Chiefs of Staff, retired Adm. Mike Mullen addressed NPS students, faculty and staff on the challenges facing America today and our way forward during the latest Secretary of the Navy Guest Lecture (SGL) in King Auditorium, Jan. 23.

As Chairman of the Joint Chiefs of Staff (CJCS), Mullen served as the nation’s senior military officer and top military adviser to Presidents George W. Bush and Barack Obama. During that time, he oversaw the end of combat missions in Iraq, the killing of Osama Bin Laden, and the dismantling of Don’t Ask, Don’t Tell.

Prior to his service as CJCS, Mullen served as the Navy’s 28th Chief of Naval Operations and was only the third officer in Naval history to be appointed to four different four-star assignments. He retired from the Navy in 2011 after a 43-year career.

“My career has seen defining times in our country’s history,” said Mullen. “During the September 11 attacks, I was in the Pentagon the moment the plane hit the building. I was actually down in the Chief of Naval Operations’ area about 100 feet away and I knew one thing, the world as we knew it had changed.

“The wars in Iraq and Afghanistan and the killing of Osama bin Laden also became incredibly defining events for me, as well as the rest of the world. What I learned from that is that you don’t get to choose what defines you,” he continued.

Mullen offered a candid, honest review of current national and international challenges, focusing part of his discussion on leadership and the challenges associated with a globalized world.

“We need leaders, and we need global leaders, but it is hard to see who those are right now in an environment that is so divisive and divided,” Mullen said. “That we would be drawing back and trying to isolate ourselves as a country after these wars, that are not even really over, that makes sense. But, we need to be very careful in the way we come home in a world that is so unforgiving and more global than ever.”

Mullen summed up the nation’s most significant challenges with something he referred to as the four Ds.

“The [first] is disruption, which is a product of the division in the country and the fact that so much of our country is fed up with Washington and a lack of accountability,” he said.

The second is, “Distribution, which can be seen by the disproportionate outcome of the recession and the loss of the American dream for too many people in this country.

“Discrimination, with policies like the Muslim ban being put in place, making it clear that when it comes to race and racism, we still have a problem in this country,” he continued. “Yes, it has improved greatly since the 60s, but with examples like Charlottesville, it shows that we have to address these issues head on.

“Lastly, the fourth D is division,” Mullen said. “Black vs. white, rich vs. poor, future vs. past, young vs. old. Those are many of the things that are in play within this whole issue of political correctness, and politicians are really critical in terms of making decisions that make us whole. In the end they are the ones that needs to solve this.”

Mullen transitioned his address to discuss challenges abroad, issuing caution to the audience with respect to “strong man leaders,” such as those of Russia and China, who will “rule their countries until their last breaths.”

He expressed the importance of changing our relationship with these, and other, economic super powers. “If we don’t get that relationship on the right track it would be a strategic disaster,” he noted of Russia specifically.

Mullen transitioned his discussion, expressing respect and confidence in America’s military force, but stressed the importance of the American people in how that force is utilized.

“This is the most capable military force of my time, second to none without any question,” Mullen said. “That said, there is a lot of debate over the size of the Army, with some wanting to increase their numbers up to 540,000. I for one want to downsize ... What I have seen at the political level is the lack of debate on the use of force, the lack of debate on going into the Middle East. The next time it happens, I want to have a real debate among the American people.”

Mullen graduated from NPS in 1985 with a master’s degree in Operations Research, was named a distinguished alumnus in 2002, and bestowed with one of the university’s highest honors in 2009 when he was inducted into the NPS Hall of Fame.

“This institution is one of my favorite places on earth and my time as a student here was a successful one for many reasons,” Mullen said. “The quality of the faculty, where we are physically, and the great time I got to spend with my family all added to this.

“You are getting things out of it that you don’t even understand will impact you,” he continued. “It prepared me in how to frame a problem, how to think about it, what the risks are ... All things that were applicable to me as I became a senior officer.”