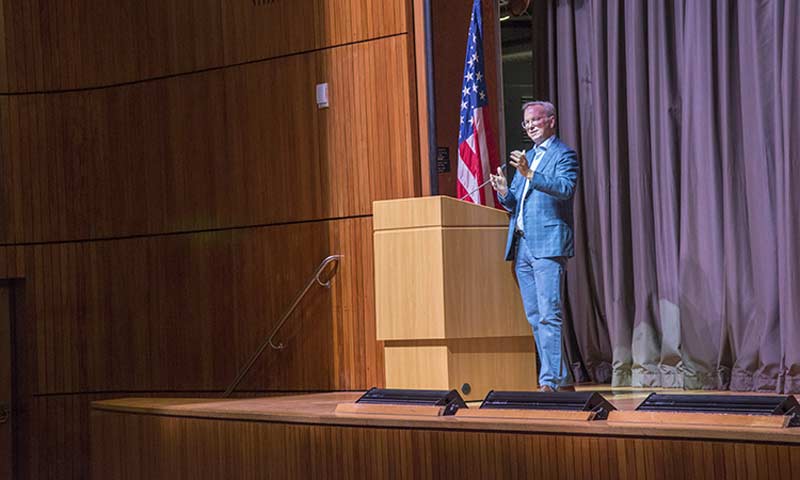 NPS welcomed Dr. Eric Schmidt, former executive chairman of Google and Alphabet Inc., to speak during the latest Secretary of the Navy Guest Lecture (SGL) in King Auditorium, Oct 30. Schmidt offered a candid discussion with NPS students, faculty and staff about innovation in the DOD, and fielded several questions from the audience.

The Naval Postgraduate School (NPS) welcomed Dr. Eric Schmidt, software engineer and former executive chairman of Google and Alphabet to speak during the latest iteration of the Secretary of the Navy Guest Lecture (SGL) series in King Auditorium, Oct 30.

Schmidt held a candid discussion with NPS students, faculty and staff about his past relationship with the university, and his current efforts to help the Department of Defense improve its ability to be innovative, bridging the gap between advanced research and operational implementation.

“I have a special relationship with NPS, having taught a set of management classes here in the mid-90s,” said Schmidt.

At Google, Schmidt said, executives get a portion of their time, 20 percent, to pursue relevant interests, and “I decided to spend my 20 percent time working on getting innovation into historically non-innovative but crucial industries, like the DOD.”

Contrary to the usual rhetoric, Schmidt sees the DOD as already possessing a relatively robust culture of innovation, but the problem lies in transitioning innovative thought to action. The issue, he says, is rooted in challenges of adoption, progressing the tools from research to engineers to operators.

He sees NPS as a part of the DOD that can help solve that problem, with the right mission and the right integration of faculty and thoughtful military operators.

“Fundamentally, the mission of NPS is to expand and broaden our nation’s defense capabilities,” said Schmidt. And it is precisely the right place to do it, he continued, because the rough configuration at the beginning was correct all along ... “Smart faculty, and military people who are here for a specific period of time, who then go back out [to the fleet].”

Schmidt says his current trip to the university comes not long after a conversation with Secretary of the Navy, the Honorable Richard V. Spencer.

“I asked Secretary Spencer, ‘What do you want these guys to do?’” Schmidt said.

And he told me something you may have all heard before, Schmidt said. “I want them to be the primary educational, research-based department between the military, the private sector, and academia to solve the most vexing national security problems,” Schmidt repeated.

Schmidt kept his formal presentation short, noting his priority was not necessarily lecturing to the NPS community, but rather, to hear directly from the students and faculty on their questions on how DOD can break through its traditional bureaucracies to become more agile and innovative in the fleet and field.

Introducing Schmidt was NPS Department of Computer Science Chair, Dr. Peter Denning, who described Schmidt as a man who influenced his life personally, and the entire world indirectly.

“Schmidt and I are old computer scientists. During my many years in the field, there were many times where I was directly affected or had brushed shoulders with Dr. Schmidt,” said Denning.

“One day, someone came to my office and told me I needed to try this new search engine called Google, and it turned out to be pretty good,” Denning added. “Turns out he has not only touched me and my work, but has touched most of the world we all work in.”