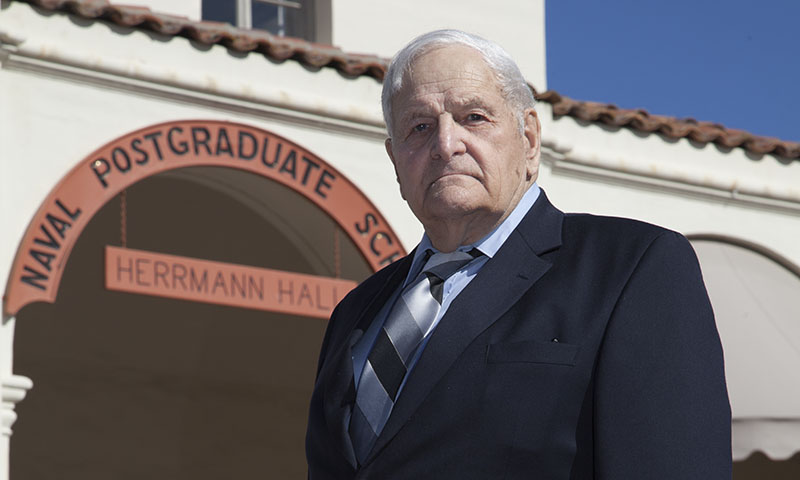 Distinguished Professor Emeritus Allen Fuhs, a former chair of both the aeronautics and mechanical engineering departments, will soon become the first NPS faculty member to be name an Honorary Fellow of the American Institute of Aeronautics and Astronautics (AIAA), one of the highest honors bestowed in the aerospace profession.

Not many people are presented with the honor of being named an American Institute of Aeronautics and Astronautics (AIAA) Honorary Fellow. But for a former NPS distinguished professor who dedicated his career to aeronautics and the naval aviation community, the honor is simply “the red cherry on top of the whipped cream of a hot fudge sundae.”

Dr. Allen Fuhs looked to a career in aerospace before the inception of NASA, at a time when the field was so uncertain that his adviser encouraged him to “choose a stable career, earn your Master of Science in Mechanical Engineering and obtain a good job at Chicago Bridge and Iron.” Fortunately for the countless students and faculty who would come to know Fuhs in his time as a Chairman of Aeronautics and Founder of the Space Systems Academic Group, he could not be deterred.

“It’s hard to pinpoint one thing that drew me to aeronautics,” Fuhs said. “There are many things. But I guess I just found it interesting. Most any aspect of it has a certain amount of fascination.”

On May 8, at the AIAA Aerospace Spotlight Awards Gala in Washington, D.C., Fuhs will be recognized as an AIAA Honorary Fellow, joining late astronaut Neil Armstrong; first Honorary Fellow, aviation pioneer Orville Wright; and former Associate Administrator for the NASA Office of Manned Space Flight George Mueller, among others. Fuhs is the first member of the Naval Postgraduate School to receive this distinguished honor.

"The selection of Distinguished Professor Fuhs for the ranks of AIAA Honorary Fellow is an exceptional honor, and one that is well deserved. Dr. Fuhs is a true pioneer in aeronautics, his foresight in establishing the Space Systems Academic Group more than three decades ago established his legacy here at NPS,” said NPS Interim President Rear Adm. Jan E. Tighe. "Dr. Fuhs' dedication to his profession will continue to prepare officers for the critical role of space in modern naval and defense operations for our national security.”

After years of working in industry, Fuhs joined NPS as a faculty member in 1966 at the urging of his friend, and later colleague, Roy Reichenback. Fuhs and Reichenbach had both attended the California Institute of Technology, where Fuhs earned both his Master’s and Ph.D. in Mechanical Engineering.

In his time as a professor and department chairman at NPS, Fuhs took on a number of responsibilities, both on and off campus. Still serving as a Navy reservist, he was committed to promoting aerospace studies for the naval community, and saw an opportunity to help students and faculty further the Navy’s space mission through the development of the Naval Postgraduate School’s Space Systems Academic Group (SSAG) in 1981.

Today, the SSAG serves as a hub for defense-focused space studies, bringing together faculty from across disciplines to provide students in the Space Systems Engineering and Space System Operations curricula with hands-on experience with space systems. Fuhs served as founder and chairman of the group until his retirement from the university in 1987.

“Prof. Fuhs has played such a big role in the development of academic programs at NPS through is service as chairman of the aeronautical engineering and mechanical engineering departments,” said NPS electrical and computer engineering Professor David Jenn, who has worked alongside Fuhs over many years in teaching courses in stealth.

“Perhaps the biggest impact of Prof. Fuhs' career comes from the hundreds of students he has taught over the years. He has supervised over 100 Master’s and PhD theses,” said Jenn. “Through their service in the military and DOD, these graduates, in turn, make countless contributions to the engineering profession and the country.”

Fuhs’ involvement in the establishment of the SSAG and activities within the AIAA earned him a place in the New Mexico Museum of Space History’s International Space Hall of Fame. He regards it as one of the highlights of his career, and recalls fondly being able to represent his alma mater, the University of New Mexico, where he received his bachelor’s degree in mechanical engineering in 1951.  Fuhs is also quite familiar with the AIAA, having served as President of the organization in 1986. Through the AIAA, he became familiar with many prominent members of the aerospace community, and understood the value in encouraging students to strive for greatness in and beyond their military careers.

“I met General “Jimmy” Doolittle through my AIAA activities and asked if he would be willing to present the AIAA Admiral William Adger Moffett Award to the outstanding graduate of the NPS Aeronautical Engineering Department. He graciously accepted. It was a great opportunity for the students to interact with someone who had such a distinguished military career.”

“I used to tell my students, ‘You are going to have a second career when you retire from the military, and one of your greatest assets will be your NPS education.’”

AIAA President, former NASA Administrator Michael Griffin, noted the prestige of honorary fellowship is awarded based on contributions to the aerospace community. The honor carries a certain amount of prestige that is certainly not lost on those selected.

“Being named a Fellow of AIAA is among the highest honors that can be bestowed upon an aerospace professional, and represents recognition from colleagues and peers for significant and longstanding contributions to our community,” said Griffin in a statement released with the official AIAA Honorary Fellow selections.

“And beyond that, recognition as an AIAA Honorary Fellow elevates one to the very pinnacle of our profession,” he continued. “This year’s selection committee has done an outstanding job of identifying those who meet these standards. I congratulate each member of this year’s class of Fellows and Honorary Fellows.”